The 58-year-old presidential hopeful discussed her campaign and her reputation as a moderate Democrat and how she plans to stand out in the crowded Democratic field.

FIVE THINGS TO KNOW ABOUT AMY KLOBUCHAR, FROM HER START IN POLITICS TO HER STAFF TREATMENT CONTROVERSY

Here’s a look at some of the biggest takeaways from the event.

‘I am a proven progressive’ 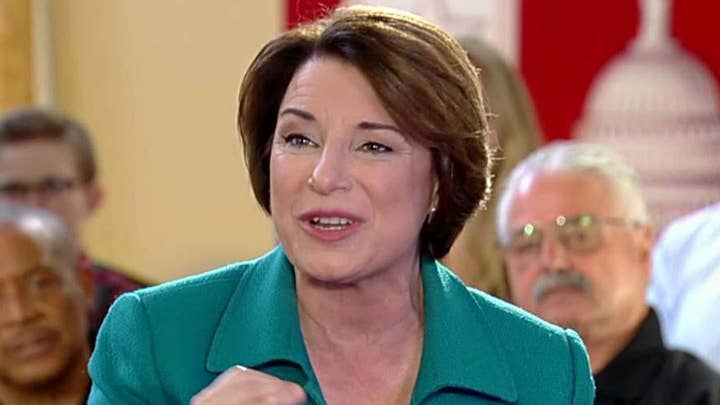 In her campaign, Klobuchar has distanced herself from other, more progressive candidates on certain issues such as "Medicare-for-all" and free college tuition -- though she has pushed back at being labeled a “moderate.”

During the town hall, she was asked by an audience member why progressives should support her campaign. Klobuchar responded that she is actually “a proven progressive.”

"The last time I checked, if you want to be a progressive and support progressives, then you're supposed to make progress," she said. "That's what I've done my whole life."

The Midwestern senator then said she passed 34 bills in the Senate where she was a lead Democrat, including one that allowed for the St. Croix Crossing bridge to be built between Minnesota and Wisconsin.

She also said she believes health care should be seen "not as a privilege, but as a right," in the U.S., while qualifying that "the way I think you get there is to build on the Affordable Care Act," not necessarily Bernie Sanders' sweeping Medicare for All proposal. Klobuchar also said she supports free two-year community college.

‘I welcome the vice president to the race’

Klobuchar was asked how she plans to beat former Vice President Joe Biden, who announced he would be joining the Democratic field in April.

“I welcome the vice president to the race," Klobuchar said. "I’ve worked with him for years, but I’m running my own campaign and I bring something that’s different to the race."

The Minnesota senator went on to say that “long odds” haven’t historically been an obstacle for several former successful presidential candidates, including former President Barack Obama.

"If I thought to myself, oh well, everyone who discounted me -- well, I won't be able to do it, I'd never be where I am today," she said, listing her career successes including running for prosecutor in Minnesota’s largest county and becoming the state’s first female senator.

‘I care about people who need help in this country’

When asked whether media reports on her management style were sexist, Klobuchar responded that she doesn't care about news coverage, and turned to her campaign's focus on mental health.

“I don’t think the world is always fair,” she said. “Right now, I think it’s more important to talk about what I actually want to do.”

Earlier this month, Klobuchar released a plan to spend $100 billion over a decade to improve mental health care and fight substance abuse, an issue she faced firsthand as the daughter of an alcoholic who struggled with addiction for years before getting sober.

Due process for Brett Kavanaugh

During the town hall, Klobuchar discussed sexual assault and harassment allegations and suggested that all cases should be looked at “on a case by case basis,” while holding to her belief that the “Me Too” movement hasn’t “gone too far.”

She was asked specifically about Supreme Court Justice Brett Kavanaugh and whether he had been given due process during the Senate Judiciary hearings last year.

“Yes, I think he did,” she said, adding that Kavanaugh did end up with a job on the Supreme Court.