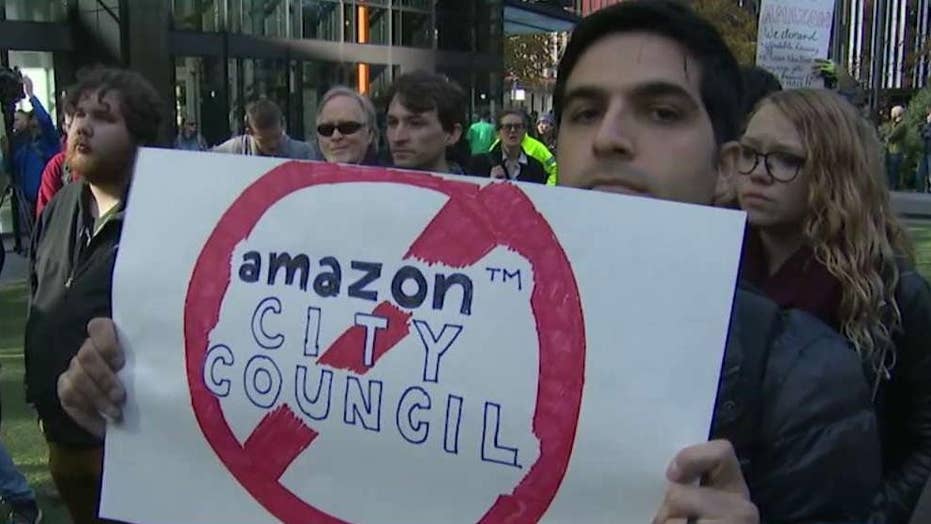 SEATTLE – It’s Election Day, and here in Seattle, all eyes are on... Amazon?

The online retailer, which is headquartered in the Emerald City, has jumped in the middle of seven City Council races in a way that will test the company’s political might in a city that has been drifting to the left for years. Amazon donated $1.5 million to CASE [Civic Alliance for a Sound Economy], a political action committee sponsored by the Seattle Chamber of Commerce. The PAC has been focused on ousting nearly all the council members up for reelection in favor of more centrist candidates. Seven of the council’s nine seats are up for grabs.

In a statement, Amazon said, “We believe it is critical that our hometown has a City Council that is focused on pragmatic solutions to our shared challenges.”

The political activism was new to Amazon, but not entirely surprising given recent votes at City Hall. In 2017, the Council passed a $275-per-employee head tax that was specifically targeting Amazon with its roughly 50,000 Seattle employees. The proposal passed without a single no vote. Its aim was to raise nearly $50 million per year for homeless services. Amazon would have paid nearly $14 million annually. The company immediately threatened to stop the construction of two downtown office towers if the head tax was not repealed. Eventually, the council caved and repealed the tax, but the damage was done.

Socialist councilmember Kshama Sawant, who had championed the head tax, got personal, calling Amazon founder Jeff Bezos the “enemy” last year. And, she has not stopped blasting Bezos and Amazon since. At a rally last week at Amazon’s headquarters, Sawant yelled, “We are absolutely opposed to the brazen attempt by Amazon and Jeff Bezos and the billionaire class in their attempt to straight-up carry out a hostile corporate takeover of City Hall.”

Sawant has had allies on the 2020 presidential campaign trail. Sen. Elizabeth Warren, D-Mass., tweeted last month, “Amazon is trying to tilt the City Council elections in their favor.” On Tuesday, Sen. Bernie Sanders, I-Vt., added on Twitter, “Jeff Bezos and Amazon think they can buy elections... Show Amazon that they can’t buy our democracy and that their corporate greed won’t stand. Get out and vote!”

But, Amazon is far from alone in pushing for a major council shakeup. Dozens of businesses have also contributed to CASE, including Starbucks, Boeing and Comcast. Two other PACs, People for Seattle and Moms for Seattle, were supporting the same candidates as CASE.

AMAZON ALEXA, SIRI CAN BE HACKED WITH LASERS, EXPERTS WARN

“We have members who have people dying of overdoses in their restrooms,” said John Engber, a spokesman for the Retail Industry Coalition of Seattle. The city’s homeless crises exploded despite a dramatic increase in the amount of tax money spent on it. The city now spends nearly $100 million a year.

“The council and the mayor declared a state of emergency four to five years ago, and we’ve not moved the dial,” said Laura McMahon, co-founder of Moms for Seattle, “in fact, things have gotten worse.”

Labor unions and billionaire venture capitalist Nick Hanauer donated heavily to a PAC supporting incumbents and the most progressive candidates in races for open seats. CAPE [Civic Alliance for a Progressive Economy] also attacked Amazon for getting involved.

“They want to make sure that they have a city council that they can control that will protect their power and profits,” said political consultant Heather Weiner, whom CAPE hired.

But, Jeff Bezos was not criticized when he donated $2.5 million supporting a gay-marriage initiative which passed in 2012. Similarly, Amazon has not been questioned for donating $400,000 toward the effort to defeat an initiative that would cut transportation funding.

A recent poll found Amazon appeared to be in sync with most Seattleites. The Crosscut-Elway Poll found two-thirds of likely Seattle voters wanted change on the City Council. Homelessness was by far the most important issue to voters.