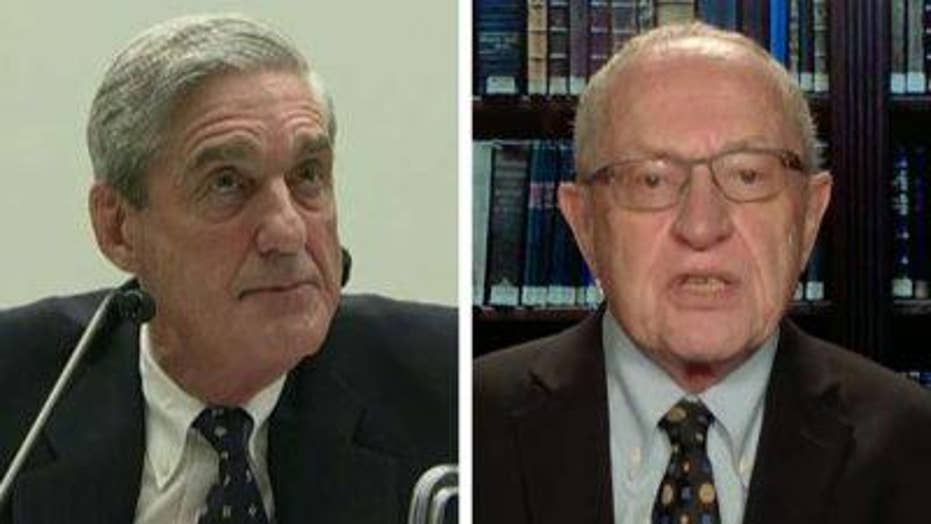 Democrats will regret issuing a subpoena to former Special Counsel Robert Mueller, who agreed to testify later this summer, according to Alan Dershowitz.

Mueller cannot refuse to answer questions from Republicans not covered by "privilege," Dershowitz claimed on Fox News' "The Ingraham Angle."

"I'm trying to stop them from shooting themselves in the foot," he said.

The law professor reacted to a statement by House Judiciary Committee Chairman Jerrold Nadler, D-N.Y. -- who, along with House Intelligence Committee Chairman Adam Schiff, D-Calif., issued the subpoenas for Mueller to appear before both panels.

ALAN DERSHOWITZ: MUELLER SHOULDN'T TELL CONGRESS ANYTHING ABOUT TRUMP NOT ALREADY IN HIS REPORT

Nadler said no one would have no right to defy the subpoena, and that any privilege asserted by the White House would be waived because the relevant information would have already been released to the former special counsel's office.

"There is no right to defy a congressional subpoena," the lawmaker said.

"The White House might assert some privilege, but when they reveal a lot of the information to Mueller and even private attorneys, they waive the privilege. So I think he will answer the questions that are put to him, because it's his civic duty to do so and he's an upstanding prosecutor."

Dershowitz claimed Nadler appeared to have overlooked that Mueller remains open to grilling from Republicans.

"He can't refuse to answer questions about the FISA application," Dershowitz said, referring to a request by the FBI to surveil a member of the 2016 Trump campaign under the Foreign Intelligence Surveillance Act (FISA).

Mueller has agreed to testify before the House judiciary and intelligence committees on July 17 after they subpoenaed the former special counsel Tuesday, according to Nadler and Schiff.