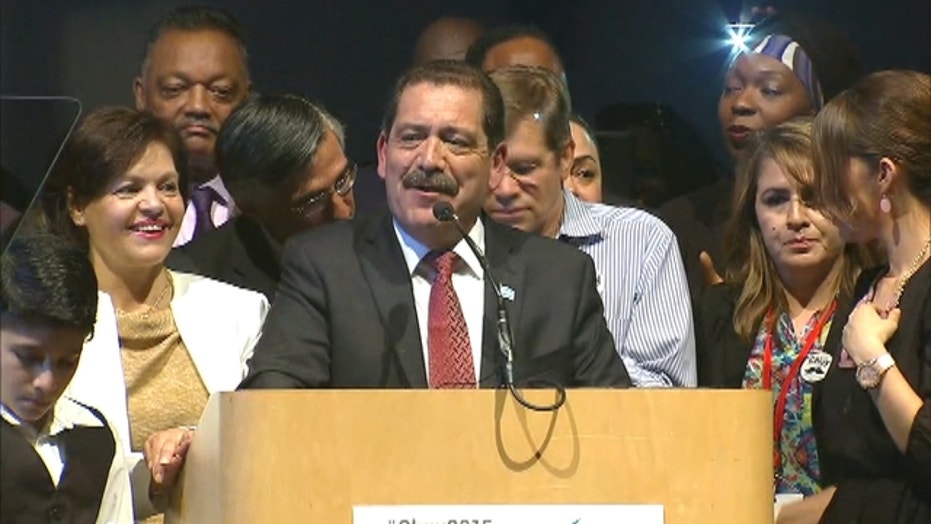 CHICAGO (AP) – After a tougher-than-expected re-election, Chicago Mayor Rahm Emanuel is pledging to take a new approach as he faces rising pension costs, ongoing gang violence and negotiations with labor unions that spent millions trying to defeat him.

Emanuel, a former congressman and chief of staff to President Barack Obama, won a second term Tuesday over a lesser-known opponent, Cook County Commissioner Jesus "Chuy" Garcia. Though he led Garcia by about 11 points with nearly all precincts reporting, the victory came only after Emanuel failed to win a majority in a first-round February contest, forcing him and Garcia into Chicago's first runoff mayoral election.

In a victory speech, he said he understands the challenges facing Chicago will require him to lead "in a different fashion," a nod to a management style he's acknowledged has rubbed some voters the wrong way.

"In the era of hard choices, I can't promise that everyone will be pleased with every decision," he told a room of cheering supporters gathered at a union hall. "But the challenges we face, we face together as one community, one city, one voice where every voice counts."

Emanuel campaigned hard to persuade voters he was the better choice to lead the nation's third-largest city through a raft of crises. He also defended his Democratic credentials as Garcia and progressive groups accused him of putting Chicago's corporate interests ahead of the working people who make up the city's neighborhoods.

He performed better across the city during the runoff than he did six weeks earlier, when two of the four challengers were black. During the February election, Emanuel's support fell in predominantly African-American areas compared with 2011, when he won a first term.

The exception Tuesday was in Chicago's heaviest Hispanic wards, where Garcia, a Mexican immigrant, saw his strongest support.

Bruce Puffer, a 56-year-old bartender, voted for Garcia, saying Chicago needs "a regular guy" running the city. But he said it will be tough going, regardless of who is mayor.

While Emanuel enjoyed strong support from trade unions that benefit from big construction projects and other development, Garcia had the backing of teachers unions, which spent more than $1 million and provided many of the foot soldiers Garcia's campaign used to get voters to the polls.

Emanuel's administration now must negotiate a new contract with the Chicago Teachers Union. Its president, Karen Lewis, considered challenging the mayor but recruited Garcia to run after she was diagnosed with cancer. The last round of talks between Emanuel and the union led to Chicago's first teachers strike in 25 years.

The mayor also will have to work with teachers and other public-employee labor unions to address a pension crisis that's the worst of any major U.S. city.

Chicago's four pension systems are about $20 billion in debt, and the fund for Chicago Public Schools teachers is short about $7 billion of what's needed to pay benefits as promised.

If Emanuel can't work a deal with labor unions or get the Illinois Legislature to approve relief, the city is on the hook for an additional $550 million payment to the retirement accounts, bringing the total payment to about $1 billion. He's said that would be roughly equal to the annual cost of having 4,300 police officers on the street or raising property taxes by 150 percent.

Emanuel also will be dealing with ongoing concerns about crime, an area Garcia frequently cited as one of the mayor's failures. While the total number of homicides fell to just over 400 last year — the lowest level in a half-century — the number of shootings climbed 12 percent during the same period. And in some areas, the number of shootings increased at a rate more than double that of the city overall.

Garcia hit on some of those issues in his concession speech, saying voters want "a city that works for everyone."

"We've got some big problems in Chicago, and no matter who is mayor we've got to work together to solve them," he said.