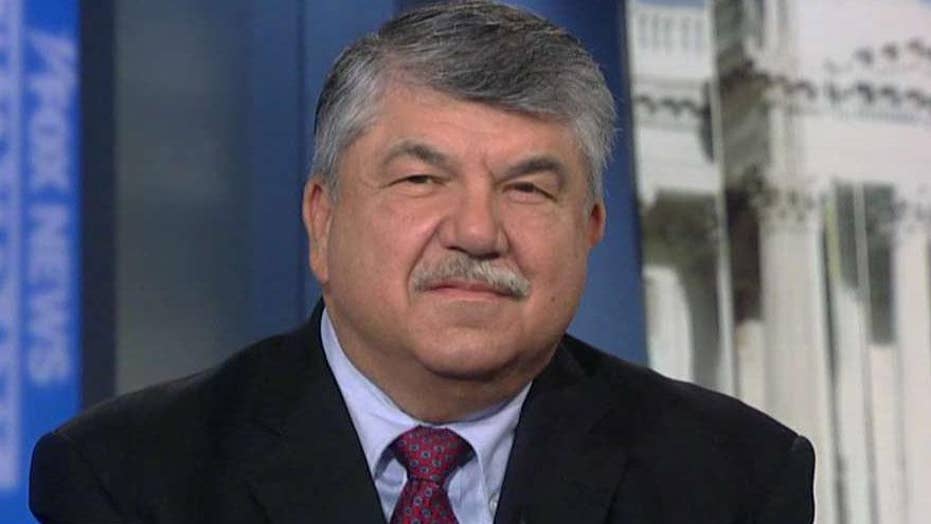 Democratic candidates' "Medicare-for-all" plans will rip apart union members' health coverage in a move AFL-CIO President Richard Trumka says will make it difficult for him and workers to get behind.

Trumka told “Fox News Sunday” that while single-payer health care is the way of the future, any plan for the present must allow union workers to keep the plans they fought and sacrificed for.

“If there isn’t some way to have our plans integrated into the system, then we would have a hard time supporting it,” Trumka told host Chris Wallace, saying “there has to be a role” for the plans union members fought for in negotiations.

Sen. Bernie Sanders, I-Vt., who is one of the top polling candidates in the Democratic field, wants the U.S. to adopt "Medicare-for-all," which would eliminate private insurance plans in favor of a government plan. Sen. Elizabeth Warren, D-Mass., and New York City Mayor Bill de Blasio have also supported eliminating private insurance.

In August, Sanders announced that he would amend "Medicare-for-all" to address union concerns.

According to the Vermont senator's presidential campaign, the change would give union workers the ability to bargain for “wage increases” or other benefits to make up for any reductions in the cost of their health care plans.

Sen. Kamala Harris, D-Calif., initially supported this, but has lately been promoting the concept of having government insurance while also allowing people to have the option to keep their private plans.

Trumka also discussed something else he and his labor organization would have trouble supporting; the USMCA. He called the trade deal with Mexico and Canada “unenforceable," claiming that Mexico is artificially keeping their wages low.

“If Mexico can’t enforce their own agreement, their own laws, then this agreement will never work because their wages will be artificially low and they will suck jobs and capital out of the United States," Trumka said, adding that "an unenforceable trade agreement is a windfall for corporations and a disaster for workers."

Another problem Trumka has with the USMCA is the difficulty it poses for dispute resolution because it allows a party to stop arbitration from happening. He also said that if a product is in violation of the agreement, it still gets to enter the U.S.

“Dispute resolution has taken eight to ten years, this is not going to speed it up, and, in the meantime, the product that’s produced in violation of the agreement continues to come into the country. We think it ought to be stopped at the border.”