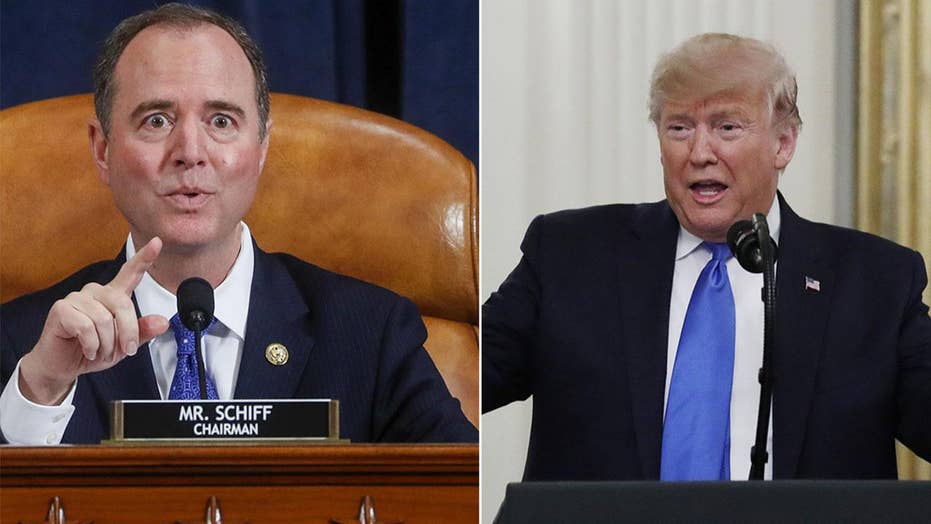 The whistleblower's attorneys say protecting their client's identity is critical to prevent a chilling effect on future whistleblowers; Kristin Fisher reports from the White House.

Despite claiming to have an "ironclad" case for impeachment against President Trump, House Intelligence Committee Chairman Adam Schiff, D-Calif., refused to say if the commander in chief will be impeached, when asked point-blank during a Sunday television interview.

"This president has now twice sought foreign interference in our election... when [Trump] invited the Russians to hack Hillary’s emails and later that day they attempted to do exactly that. There is a sense of urgency when you have a president who's threatening the integrity of our elections," he said on CNN's "State of the Union"

"We need to act now if we're going to act, and we can’t allow this obstruction to succeed," Schiff continued. "The other point I would make is, the case in terms of the Ukraine misconduct is ironclad, but so is the case of the president’s obstruction of the Congress."

Despite displaying supreme confidence in Trump's guilt, the California Democrat was unable to answer host Jake Tapper when asked if Trump would eventually be impeached, earlier in the interview.

"If the facts aren’t contested and your committee is writing up the report and you don't, at least as of now, have any scheduled witnesses or depositions -- do you think President Trump should be impeached?" Tapper asked.

Schiff said he still had to confer with his congressional colleagues and home state constitutes before rendering a final verdict.

"I want to discuss this with my constituents and my colleagues before I make a final judgment on it," he replied. "But there are a couple of really important things we need to think about.

"And one is, are we prepared to say that soliciting foreign interference, conditioning official acts like $400 million of taxpayer money, White House meetings to get political favors is somehow now compatible with the office? Because if we do, it's basically carte blanche for this president and anyone who comes after him. But are we also prepared to say that Congress will tolerate the complete stonewalling of an impeachment inquiry or our oversight? Because if we do, it'll mean that the impeachment clause is a complete nullity and... our oversight ability, is really an ability in name only."