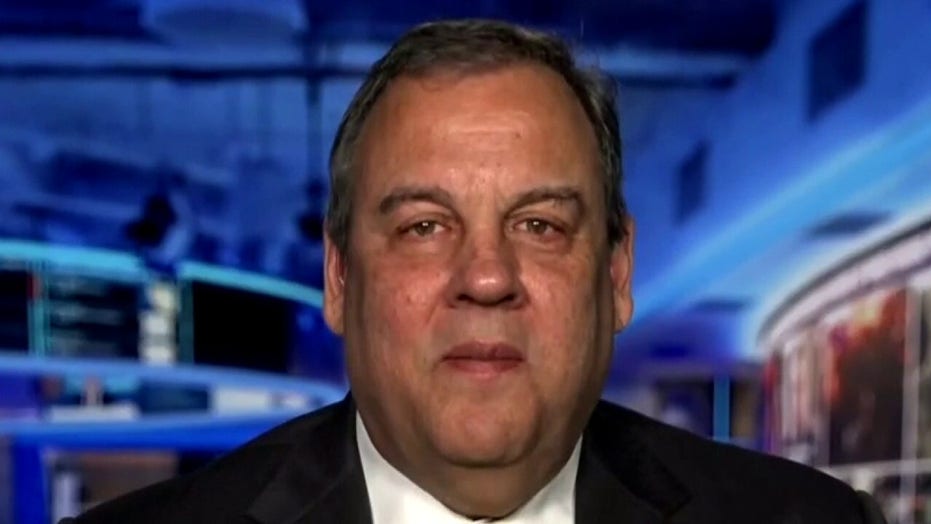 The book’s subtitle, "Saving the party from truth deniers, conspiracy theorists, and the dangerous polices of Joe Biden," is a direct shot at the former president, who on a daily basis continues to re-litigate his 2020 election loss to now-President Biden as he repeatedly flirts with another White House run in 2024.

And it appears to be a major effort by Christie to spell out his vision for the GOP going forward, as the former two-term governor and 2016 Republican presidential candidate sets himself up for a potential second White House run in 2024.

CHRISTIE-TRUMP WAR OF WORDS OVER FUTURE OF GOP HEATS UP

"Christie reveals exactly how absurd grievances and self-inflicted wounds sabotaged Donald Trump’s many successes and allowed Democrats to capture the White House, the House, and Senate in two years—a first for the GOP since the days of Herbert Hoover," the book’s publisher writes in a preview.

"In his frank and compelling voice, Christie dissects the last year of the Trump administration—which provoked nothing but conspiracy theories and infighting—and he lays out an honest and hopeful vision, explaining how Republicans can capture the future and save America from today’s damaging Democratic excesses," the Simon and Schuster website reads.

Christie will be all over the media this week as his book releases, but his high profile comeback tour – as well as the attacks and counter attacks between the two GOP leaders who are both known for brash and assertive in-your-face politics -- kicked off last weekend.

That’s when Christie, in a speech to an influential group of Republicans and in an interview with Fox News, urged his party to stop looking back to Trump’s 2020 election loss to Biden, "move on, and talk about issues that voters care about."

"We can no longer talk about the past and the past elections," the former governor, a supporter of Trump but vocal critic of the former president's litigating of the 2020 election, said to applause as he addressed the annual leadership meeting of the Republican Jewish Coalition (RJC), a major conference of party leaders, activists, mega-donors, and bundlers.

CHRISTIE URGES REPUBLICANS TO ‘MOVE ON’ FROM 2020 ELECTION

"No matter where you stand on that issue, it’s over," Christie argued. "Every minute we spend talking about 2020, while we’re wasting time doing that, Joe Biden and Kamala Harris, Nancy Pelosi and Chuck Schumer are laying ruin to this country. We better focus on that and take our eyes off the rearview mirror and start looking through the windshield again."

The former governor’s speech and interview came days after the gubernatorial victory by Republican Glenn Youngkin in Virginia, where the GOP hadn’t won statewide in a dozen years, and after Republican Jack Ciattarelli’s near upset of Democratic Gov. Phil Murphy in the blue state of New Jersey. Christie poined to those election results "as the beginning of the new era for the Republican Party." A era which in Christie’s mind does not include Trump.

Nearly six years ago, Christie’s presidential run crashed and burned after a disappointing and distant sixth-place finish in New Hampshire’s presidential primary, where he’d placed all his chips. Christie quickly backed Trump, who had crushed the rest of the field in New Hampshire, launching the real estate mogul and reality TV star toward the Republican presidential nomination and eventually the White House.

Christie remained a friend and outside adviser during Trump’s presidency but broke with him over the deadly Jan. 6 riot at the U.S. Capitol by Trump supporters bent on disrupting congressional certification of Biden’s win.

PENCE MADE THIS PREDICTION ABOUT THE 2024 ELECTION

Christie’s speech last weekend grabbed plenty of headlines and appeared to irritate the former president, who in a statement two days later charged that Christie "was just absolutely massacred by his statements that Republicans have to move on from the past."

And Trump spotlighted that "Chris left New Jersey with a less than 9% approval rating – a record low, and they didn’t want to hear this from him!"

Christie returned fire in an interview with Mike Allen of Axios, saying, "I’m not gonna get into a back-and forth with Donald Trump. But what I will say is this: When I ran for reelection in 2013, I got 60% of the vote. When he ran for reelection, he lost to Joe Biden," Christie said. "I’m happy to have that comparison stand up, because that’s the one that really matters."

Unlike nearly all of the other potential Republican presidential contenders, Christie has no problem speaking publicly about his likely national ambitions, telling Fox News last weekend that "having run already, I’m not going to run for the experience. I’ve had the experience. If I run, I run because I think I can win, and I think I can make a difference."

And unlike the rest of the potential field, it appears Christie doesn’t mind jabbing at Trump who, ten months removed from the White House, remains very popular and influential with Republican voters and politicians.

"There is no more fearsome presence, especially on a debate stage, than Gov. Christie, who can take a punch and then throw it back twice as hard," veteran Republican strategist Colin Reed told Fox News.

"Gov. Christie is one of the most effective, sharpest and best communicators in the Republican Party, and it is one of his best advantages heading into 2024," added Reed, who served as deputy communications director and spokesperson during Christie’s tenure as governor.

Two other potential 2024 White House hopefuls traveled to Iowa this weekend to help out fellow Republicans in the state whose caucuses for half a century have kicked off the presidential nominating calendar.

Sen. Tom Cotton of Arkansas made three stops in Iowa on Friday, including delivering the featured speech at the 14th Annual Kaufmann Harvest Festival. Cotton joined Iowa GOP chair Jeff Kaufmann and his son, state Rep. Bobby Kaufmann, at the fundraiser in Wilton. The trip was Cotton’s third this year to the Hawkeye State.

While Cotton was in the southeast part of the state, Sen. Rick Scott of Florida was in Des Moines, Iowa’s capital and largest city, as one of the headliners for the Polk County GOP’s annual Lincoln Dinner.

Scott, the chair of the Senate GOP’s reelection committee, was joined at the fundraising event by Sen. Joni Ernst of Iowa as well as top state Republican lawmakers.