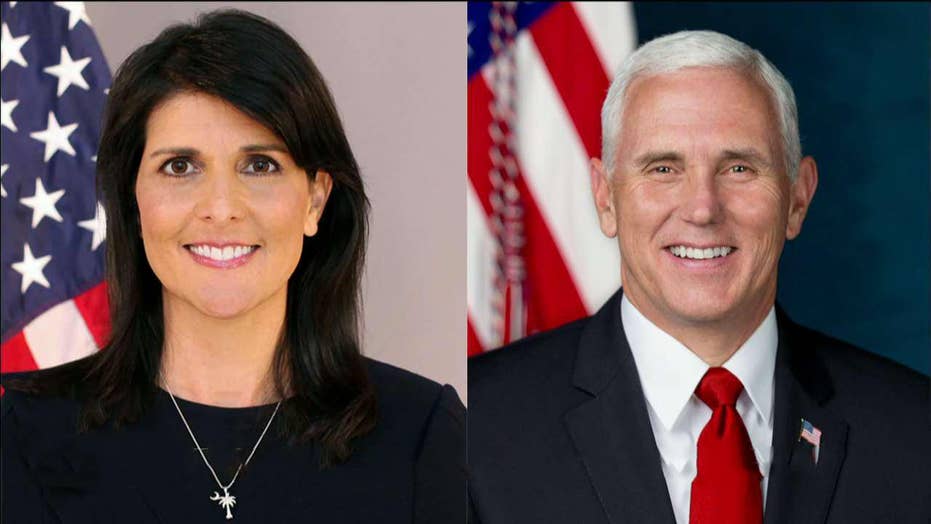 Will Nikki Haley run for president in 2024?

Talk radio host Tony Katz says he believes Nikki Haley has her eyes on the 2024 election.

Whether President Trump wins or loses reelection in November, there will likely be a wide open race for the 2024 Republican presidential nomination.

But when that GOP battle begins in earnest – and how the field of contenders shapes up – will depend on the results of the 2020 presidential election.

If the president wins a second term in the White House, the surge of Republicans hoping to succeed him will likely wait until after the 2022 midterm elections. But if Trump loses in November, longtime Republican consultant Dave Carney says “it’s easier for more people to run and it will be a free-for-all right away.”

Carney, a veteran of numerous presidential campaigns, also emphasized that “there will be different grouping” of contenders depending on whether Trump wins or is defeated in November.

Also likely having an impact if the president loses this year is the margin of his defeat — and how active Trump would stay in the public eye and within the GOP.

The 2024 race will be more than just a contest for the nomination: it will be also a battle to shape the GOP going forward.

Veteran Republican strategist Colin Reed noted that “whenever the Trump era comes to an end, whether that’s next year or five years from now, the GOP will go through a period of discussion and debate about the future direction of the party.”

Will Republican primary voters crave a housecleaning, or will they seek more of the same?

THE 2020 PRESIDENTIAL RACE: THE LATEST POLLING FROM FOX NEWS

One thing’s for sure — the jockeying has already begun.

While the names will change over the coming years, here’s a list (in no particular order) of some likely and potential contenders for the 2024 Republican presidential nomination that are currently on the minds of GOP strategists who spoke with Fox News.

Vice President Mike Pence – The former Indiana governor and congressman has something that no other likely or potential contender can match: the title of vice president.

Nikki Haley – There’s been tons of speculation regarding the former South Carolina governor who served as Trump’s ambassador to the United Nations.

Secretary of State Mike Pompeo – The former congressman from Kansas who served as Trump’s CIA director before becoming American’s top diplomat has been quietly reaching out to conservative leaders and donors.

Gov. Ron DeSantis – The first-term conservative and populist Florida governor is a strong ally and supporter of the president, who’s earned Trump’s praises.

Sen. Tom Cotton – The Iraq War veteran who served a term as a congressman from Arkansas before winning election to the Senate in 2014 recently grabbed headlines and won applause from conservatives for targeting China over the coronavirus and for a recent controversial opinion piece for The New York Times.

Sen. Rick Scott – The multimillionaire former two-term Florida governor who was elected to the Senate in 2018 went up with ads in Iowa during the caucuses earlier this year that trashed the impeachment of Trump and slammed former Vice President Joe Biden.

Sen. Josh Hawley – The former Missouri attorney general – who at age 40 is the youngest member of the Senate – is seen by some as a rising star after wowing conservative pundits with his speeches and the legislation he’s pushed during his tenure so far on Capitol Hill.

Sen. Ted Cruz – The conservative firebrand from Texas – who was the runner-up to Trump in the 2016 nomination battle – is regarded as a very likely 2024 contender.

Sen. Marco Rubio – Florida’s senior senator – who also made a bid for the 2016 nomination – has publicly stated that he’s potentially interested in running for president again.

Gov. Larry Hogan – The two-term Republican governor of the blue state of Maryland definitely did not rule out a 2024 White House bid when paying a visit to the first-in-the-nation presidential primary state of New Hampshire last year. The more moderate Hogan would likely run in the mold of a John McCain or Mitt Romney Republican.

Donald Trump Jr. – Could the president’s oldest son be his heir apparent? While that remains to be seen, he’s a partisan warrior who’s been a tireless rock star on the campaign trail for his father and for down-ballot conservatives.

President Trump – Donald Jr. may have to wait. If the president loses reelection in November, there’s nothing stopping him from running again in 2024. President Grover Cleveland pulled off the feat in 1892 after losing his reelection bid four years earlier. While Presidents Jimmy Carter and George H.W. Bush quickly lost clout within their parties after suffering reelection defeats, it’s unlikely Trump would suffer the same fate, unless he lost in an overwhelming landslide.