Tensions between the U.S. and China continued to rise in 2021 over Beijing's aggression toward Taiwan as well as signs the U.S. government is prepared to aid Taipei if it is invaded or attacked by China.

China claims Taiwan is part of its own territory and has rejected its claims of independence. The two countries split in 1949, and China has been increasing pressure on the self-ruled nation while opposing its involvement in international organizations such as at the United Nations. The U.S. does not formally recognize Taiwan but maintains an unofficial relationship and is supportive of its democratic government.

The dueling policies have for years led to a diplomatic tightrope that both sides have had to navigate. But 2021 saw that tension strained further.

The year started with then-Secretary of State Mike Pompeo lifting rules that barred interactions between U.S. and Taiwanese diplomats, a move that drew a rebuke from the communist regime in Beijing.

If China was hoping for a softer stance from the incoming Biden administration on the thorny question of Taiwan, it was likely disappointed when Taiwan's top representative was invited to President Biden’s inauguration.

Just days after the inauguration, China sent fighter jets into the Taiwan Strait in what was seen as a show of force to the new administration, which showed no sign of dropping the Trump administration’s broader pro-Taiwan policy.

The Biden administration made a number of pro-Taiwan statements over the ensuing months, including Secretary of State Antony Blinken’s call for Taiwan to be admitted to the World Health Organization, something furiously opposed by Beijing. 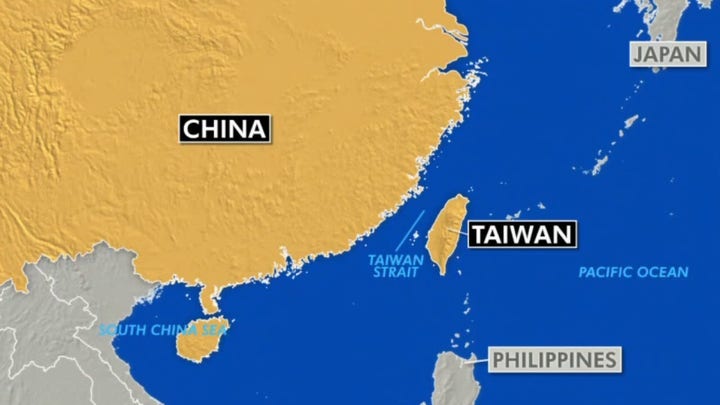 The rhetoric escalated from Beijing with Chinese President Xi Jinping claiming China has a "historic mission" to control Taiwan and urging other countries not to interfere.

CHINA CLAIMS US WILL PAY ‘UNBEARABLE COST’ FOR AIDING TAIWAN

In August, the White House clarified comments made by Biden suggeting the U.S. has a "sacred commitment," that "if, in fact, anyone were to invade or take action against our NATO allies, we would respond. Same with Japan, same with South Korea, same with Taiwan."

The remark quickly made headlines because U.S. policy for decades has been one of "strategic ambiguity" toward how it would respond to such an attack. The 1979 Taiwan Relations Act commits the U.S. to support Taiwan, including providing it defensive capabilities, but not necessarily to engage in a military conflict. An administration official later said the policy had not changed.

Coinciding with the disastrous U.S. withdrawal from Afghanistan, China began ramping up its aggression again in Taiwan. Some experts linked the two acts.

In October, China sent more than 80 planes, including fighter jets and bombers, toward Taiwan over a two-day period. That came just days after China marked the 1949 founding of the People’s Republic of China by sending two waves of aircraft. It led to Taiwan scrambling aircraft in response.

With tensions again escalating, Biden was asked whether the United States would defend Taiwan from a Chinese attack.

"Yes," Biden replied, "yes, we have a commitment to do that."

In this photo released by Xinhua News Agency Chinese President Xi Jinping, right, and U.S. President Biden appear on a screen as they meet via video link in Beijing, China, Tuesday, Nov. 16, 2021. (Yue Yuewei/Xinhua via AP)

"The U.S. defense relationship with Taiwan is guided by the Taiwan Relations Act," the spokesperson said. "We will uphold our commitment under the Act, we will continue to support Taiwan's self-defense, and we will continue to oppose any unilateral changes to the status quo."

China soon responded with a prickly statement of its own.

"No one should underestimate the strong resolve, determination and capability of the Chinese people to safeguard national sovereignty and territorial integrity," a Chinese foreign ministry spokesperson said, according to the Chinese Global Times. "China has no room for compromise."

Both sides keep up the heat

As 2021 drew to a close, both sides have kept the rhetoric hot, indicating that tensions are likely to keep bubbling throughout 2022. In December, Secretary of State Antony Blinken said there would be "terrible consequences" if Beijing invaded or attacked Taiwan.

"We’ve been very clear and consistently clear over many years that we are committed to making sure that Taiwan has the means to defend itself and … we will continue to make good on that commitment," Blinken said on the subject of committing military forces in the event China does invade Taiwan.

On Thursday, Chinese Foreign Minister Wang Yi alleged the U.S. "has gone back on its commitment made when it established diplomatic relations with China, condoned and abetted ‘Taiwan independence’ forces, and tried to distort and hollow out the one-China principle."

"This will put Taiwan into an extremely precarious situation and bring an unbearable cost to the U.S. itself," he said.