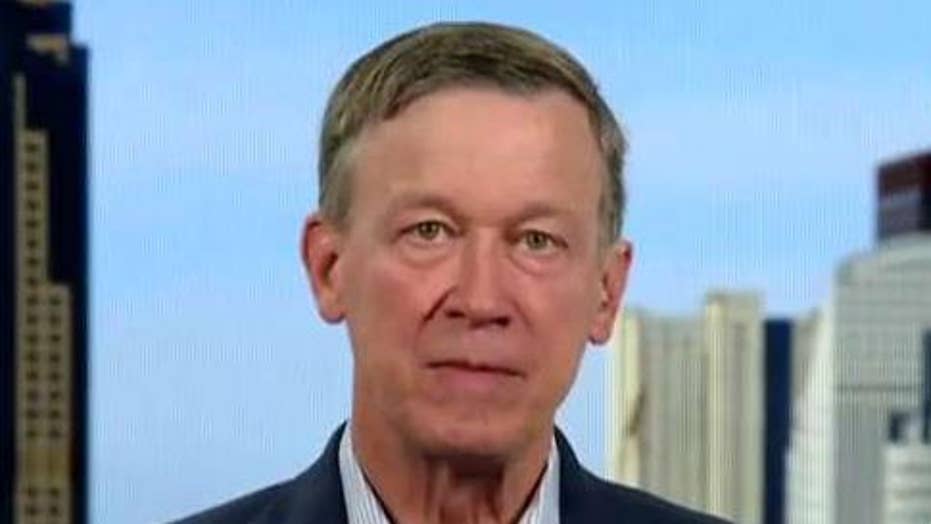 2020 presidential candidate John Hickenlooper on the death of Jeffrey Epstein

Facing the likelihood that he won’t make the stage at next month’s Democratic presidential debates, former two-term Colorado Gov. John Hickenlooper will end his 2020 run for the White House on Thursday, a source close to him told the Associated Press.

Advisers close to Hickenlooper’s inner circle previously told Fox News that Hickenlooper was facing mounting national pressure to end his longshot bid for the White House and jump into Colorado's crowded Democratic U.S. Senate primary for the chance to face off next year against first-term GOP Sen. Cory Gardner.

Hickenlooper, 67, struggled to raise funding and his poll numbers as he pursued the Democratic Party's presidential nomination. Advisers reportedly say he'd be better off running against Gardner, a former two-term congressman who narrowly defeated incumbent Democratic Sen. Mark Udall in 2014. The Democratic Senatorial Campaign Committee views Gardner as vulnerable in 2020.

A Democratic source familiar with Hickenlooper’s recent conversations with Senate Democratic leadership regarding a potential Senate run told Fox News “the DSCC wants him to drop (his White House bid) and they want this recruit really badly.”

Hickenlooper, a geologist by training who started a successful brewery in downtown Denver and then served two terms as the city’s mayor before winning the governorship, left office in January with an approval rating nearly 20 percentage points above water.

A new poll in Colorado released this week suggested Hickenlooper would be far ahead of the rest of the already-crowded field of candidates for the Democratic Senate nomination if he were to join that race.

HICKENLOOPER WEIGHS IN ON THE DEATH OF JEFFREY EPSTEIN

Hickenlooper faced a large uphill climb to meet the two Democratic National Committee thresholds – campaign contributions from 130,000 individual donors and at least 2 percent in four qualifying polls – to make the stage at the next two debates, which will be held next month and in October.

Democratic presidential candidate and former two-term Colorado Gov. John Hickenlooper speaks with Fox News in the spin room, following the second round of primary debates, in Detroit on July 30.

And the clock’s ticking: He has just two weeks left to qualify for the September showdown.

Fox News also confirmed a New York Times report on Tuesday evening that Hickenlooper met privately with Sen. Michael Bennet of Colorado – a rival for the Democratic presidential nomination – when the two crossed paths while campaigning in Iowa over the past week. Aides to both campaigns have been tight-lipped about what the two discussed.

Bennet – he was superintendent of Denver’s schools under then-Mayor Hickenlooper – also refused during an MSNBC interview on Wednesday to divulge the topic of their conversation.

But Bennet described his former boss as a phenomenal governor and mayor and added, “I don’t see any reason why he wouldn’t be a phenomenal senator, but he’s got to make his own decision.”

Bennet, who also faces a steep climb to make the upcoming debates, said he’d stay in the race even if he doesn’t qualify for the showdowns.

Hickenlooper had a lackluster second quarter of fundraising, bringing in just $1 million during the April-June period. And six weeks ago, much of his senior staff left the campaign over differences with the candidate over the future of the effort.