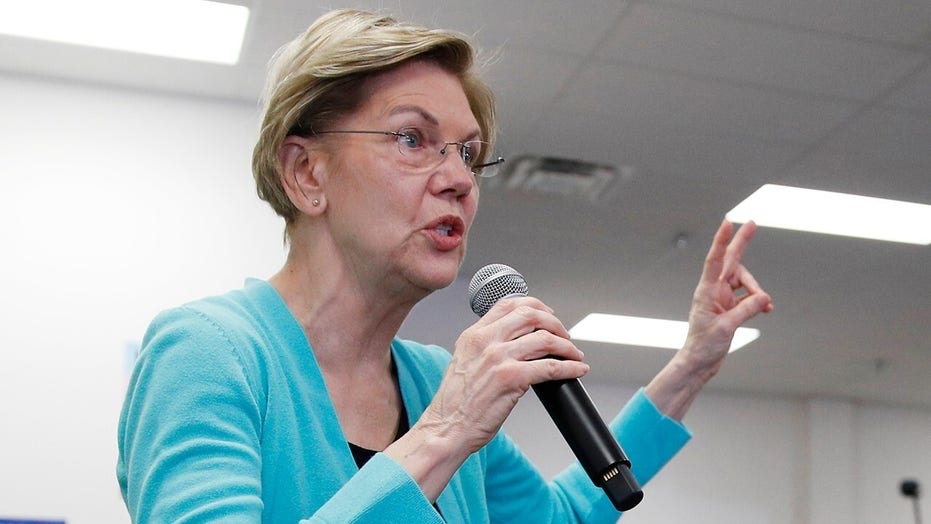 Warren: If all candidates want to get rid of super PACs count me in, I’ll lead the charge

The Democratic presidential candidate’s brutal take-down of rival Mike Bloomberg at this week’s prime-time nomination debate not only won her rave reviews, the progressive senator from Massachusetts also cashed in on the breakout performance.

“Since I stepped on the #DemDebate stage, our grassroots campaign has raised more than $5 million,” she touted on Twitter. “We’ve not only reached our critical goal of raising $7 million before the Nevada caucuses—we're now raising it to $12 million.”

The infusion of cash – her team also highlighted that Warren’s hauled in $17 million since the start of February – came just in the nick of time.

According to her campaign finance report for January – which was filed late Thursday night just ahead of the Federal Election Commission deadline – Warren was down to just $2.3 million cash on hand at the start of this month.

She's not alone in draining the piggy bank in the race for president. While Warren was the closest to going into the red, Sen. Amy Klobuchar of Minnesota was also running low, with just $2.9 million in her campaign coffers.

But the centrist senator from Minnesota is also replenishing her campaign bank account. Klobuchar’s campaign tells Fox News that they raised $12 million from the Feb. 7 debate in New Hampshire through Sunday. Klobuchar’s strong performance in that debate helped boost her to an impressive third-place finish in the first-in-the-nation primary.

Former South Bend, Ind., Mayor Pete Buttigieg was down to $6.6 million cash on hand as of Feb. 1.

Buttigieg – who deadlocked with Sen. Bernie Sanders of Vermont for victory in the Iowa caucuses and came in a close second to Sanders in New Hampshire – has been cramming in as many fundraisers as his schedule allows the past week and a half. And Thursday he announced he aimed to raise $13 million by Super Tuesday.

“Can you chip in right now to make sure that we’re able to sustain our momentum,” he asked supporters in a fundraising email sent on Friday.

Former Vice President Joe Biden had $7.1 million in his campaign coffers at the beginning of the month. The former vice president – in a fundraisings email to supporters on Friday – stressed that ‘we’re racing up against the clock” and “we can’t fall short.”

The four candidates – who all went on spending sprees in January to put up ads and build out staff – are facing off against three very well-financed rivals.

Sanders – fueled by a massive intake of small-dollar contributions from grassroots donors – had nearly $17 million cash on hand as of Feb. 1. His campaign reported hauling in $25 million in January and touted that they brought in $2.7 million in the 12 hours following Wednesday night’s debate.

And then there are the billionaires.

Former hedge fund manager turned environmental and progressive advocate Tom Steyer has pumped more than $200 million into his White House run. But that’s nothing compared with former New York City Mayor Mike Bloomberg. The multi-billionaire business and media mogul shelled out an eye-popping $460 million of his own money from late November when he announced his candidacy through the end of January.

The cash crunch comes at a critical time – as Super Tuesday is just a week-and-a-half away. Roughly a third of all Democratic presidential nomination delegates are up for grabs on March 3, when 14 states – including giants like California and Texas – hold contests. And it costs a lot of money to flood the airwaves with ads and put troops on the ground in the Super Tuesday states.

While outside groups such as super PACs are lending a helping hand to the fiscally challenged candidates, the well-financed contenders obviously have an advantage heading into the contests in the delegate-rich states.

And that’s a concern to many in the Democratic Party who worry that a cash-heavy Sanders could continue to roll through the primaries.

“The financial picture of these candidates offers yet another indication that Bernie Sanders is the favorite to amass an insurmountable delegate lead by early March. The other candidates have a short and rapidly closing window to prevent that scenario,” warned veteran Democratic operative Chris Moyer.

“Given their relative lack of money, they will have to rely much more on strong debate performances and electoral success in Nevada and South Carolina to shape the media narrative heading into Super Tuesday — which at this point can be just as important in swaying voters as paid ads,” explained Moyer, a veteran of the 2016 Hillary Clinton campaign and the 2020 presidential campaign of Sen. Cory Booker of New Jersey.