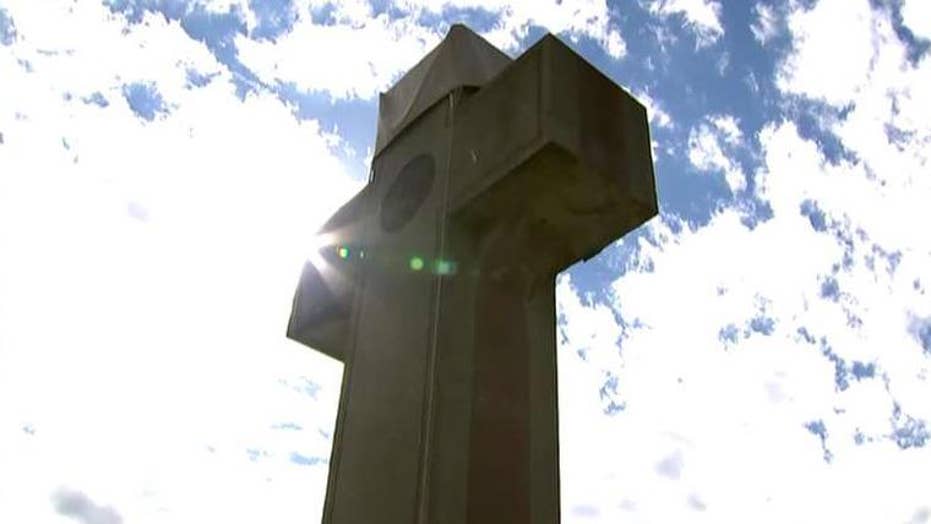 Opponents say the massive Peace Cross in Bladensburg, Maryland violates the Establishment Clause of the First Amendment to the Constitution; supporters say the memorial honors service members and the constitutional ideals they died to defend.

Peter Jackson’s documentary “They Shall Not Grow Old” brings to life the men who actually fought in World War I. The silent, grainy, gray films from a century ago have long felt too remote and distant to convey the power, intensity and suffering that the war entailed. But Jackson changed all that. He added color, adjusted the film’s speed, and even hired actors to voice the dialog of the men as revealed by forensic lip readers.

Alvergia Guyton and Mary Laquay may not be Peter Jackson, but they have done the country a similar service in bringing to life their uncles of the same era.

John Henry Seaburn Jr., Alvergia’s uncle, fought in a segregated African-American regiment of the U.S. Army that was placed under French command – the famed “Red Hand Division.” He died of wounds received in combat.

TODD STARNES: HOW DO AMERICANS REALLY FEEL ABOUT WAR MEMORIALS (AS ATHEISTS FIGHT TO TEAR THEM DOWN)?

Mary’s uncle, Thomas Fenwick, descended from a Revolutionary War patriot. Thomas died of pneumonia after being gassed in battle days before the war’s end in 1918.

These men are long dead, having sacrificed their all for the cause of freedom. If their mothers and The American Legion had not determined to build a visual reminder of their service and sacrifice, John Henry and Thomas would be more silent and forgotten than the black and white film strips recently restored by Peter Jackson.

Yet Alvergia Guyton and Mary Laquay face the very real prospect of seeing a concrete and bronze memorial to their heroic uncles destroyed. A federal court ruled last year that the memorial is unconstitutional; later this month, the Supreme Court will hear oral arguments to determine its fate.

The Bladensburg World War I Veterans Memorial sits mere miles from Washington, D.C. In 1925, The American Legion dedicated what one mother called her son’s “gravestone,” a cross-shaped memorial erected to the memory of 49 Prince George’s County, Maryland men who died in the Great War.

Opponents of the memorial wish to not only erase the memory of the service of men like John Henry and Thomas, but to rid the public square of any such display that includes religious imagery. They want the memorial altered, destroyed or removed from public property.

In their minds, a cross-shaped memorial erected by mothers deprived of their sons, establishes a state religion and therefore violates the Constitution – never mind the reality that Gold Star mothers in Maryland chose the shape of a cross to resemble the marker marking the graves of their sons in Europe.

Their choice of the memorial’s shape didn’t violate the Constitution then and it doesn’t now.

The Founders drafted our First Amendment to protect religious freedom in at least two ways. While the Establishment Clause prevents the government from coercing us into supporting a state-approved religion, the Free Exercise Clause preserves our right to live our lives according to our beliefs without interference by the government.

Unfortunately, four decades ago the Court created an unsustainable standard for adjudicating certain religious liberty cases; known as the Lemon Test, it has led to unworkable and absurd results.

The Lemon Test asks a number of subjective questions – Is there a secular purpose for the state action? Does the state activity have the principal or primary effect that neither advances, nor inhibits religion? Does the state act excessively entangle government with religion? – that have the effect of giving passersby a heckler’s veto over Veterans memorials, like this one, that happen to feature religious symbols or language.

FILE - In this May 7, 2014 file photo, the World War I memorial cross is pictured in Bladensburg, Md. (Algerina Perna /The Baltimore Sun via AP, File)

We propose that the Supreme Court abandon Lemon and adopt an alternative – a more historically-grounded test that protects religious liberty by preventing the compulsion and suppression of religious exercise. This approach would restore the balance between restraining government and setting citizens free to exercise their religion.

Without this clarity in the law, teachers will still confiscate candy canes in the classroom, and officials will still count how many reindeer are displayed on public property to justify the presence of a creche.

And then there are veterans memorials like the one in Bladensburg. It should not take five years of litigation and a four-volume appendix to conclude that a memorial to veterans is constitutional. Yet it has, and if the current decision stands, hundreds of memorials across the country – including those in Arlington National Cemetery – face the prospect of being sandblasted, defaced or destroyed.

The Bladensburg World War I Veterans Memorial is in keeping with finest traditions of American history. We honor the sacrifice of brave men and women upon the altar of freedom with memorials because we will otherwise forget their service.

Americans should honor the way Alvergia and Mary’s grandmothers chose to remember the service and sacrifice of the 49 men from Prince George’s County, Maryland who died in World War I. For families like theirs, the memorial should remain standing.