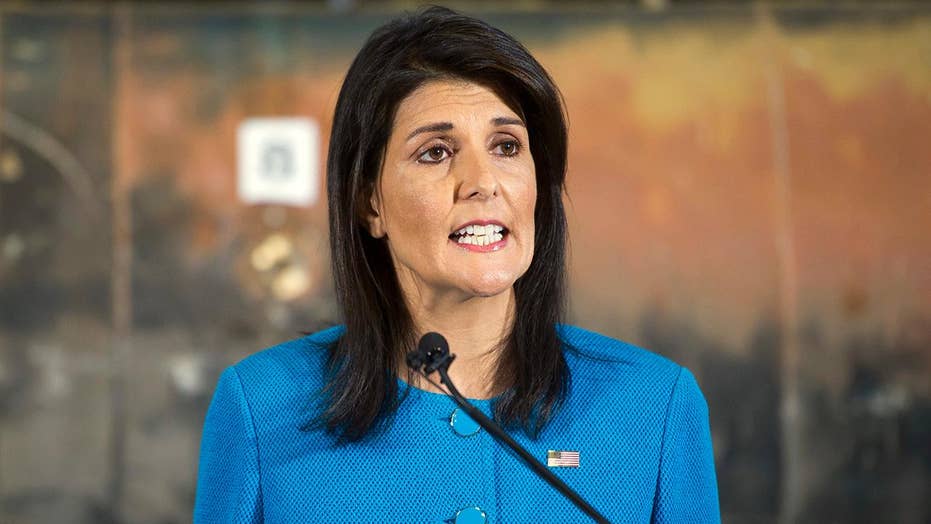 Democrats are trying to stack the deck with female candidates for the 2020 presidential race, desperate for a do-over of Hillary Clinton’s failed 2016 attempt to put a woman in the Oval Office for the first time. But if President Trump continues to have the kind of success for the American people in the next three years that he’s had in his first year in office, it’s doubtful that 2020 will see the first female president.

In fact, it’s becoming more plausible that when our country does elect its first female president, that woman may very well be Republican Nikki Haley.

As U.S. ambassador to the United Nations, Haley’s handling of recent events set her apart as a rising star. Her performance has shown that she has what it takes on the international stage to represent America abroad. Like the president, she refuses to let the U.S. to be bullied by other countries.

This week Haley announced a $285 million cut in the 2018-2019 U.N. operating budget. This comes after President Trump threatened to cut off U.S. funding to countries that voted in favor of a U.N. resolution that called on the U.S. to drop plans to move our embassy in Israel to Jerusalem and condemned the U.S. for recognizing Jerusalem as Israel’s capital. The final vote was 128-9 in favor of the resolution. Another 35 nations abstained on the vote and 21 nations didn’t vote.

Women had a pretty good year in 2017, but since President Trump is the president, our friends on the left would have their membership in the angry feminist club revoked if they ever admitted this truth.

Haley said: “We will no longer let the generosity of the American people be taken advantage of or remain unchecked.” Harvard law professor Alan Dershowitz praised the budget cut saying: “It’s about time we sent a message to the U.N., which has become a place of hate when it comes to the U.S. and Israel.”

Haley was a successful two-term governor of South Carolina. She especially won praise for bridging the racial divide in the aftermath of the mass shooting at Emanuel AME Church in Charleston, when nine black church members were gunned down by an avowed white supremacist.

Last month Politico ran an article headlined “Why 2020 Will be the Year of the Woman,” noting:  “In 2016, women composed nearly 60 percent of the Democratic presidential primary electorate, many of whom are understandably pining for the karmic justice of defeating Trump with shards from a glass ceiling that Hillary Clinton could not break.”

Given Nikki Haley’s scorching speech at the U.N. last week standing up to Israel’s opponents and standing out as one of the more effective leaders in the Trump administration, a strong case can be made that 2017 is the real “Year of the Woman.”

This year also saw the fear lifting for women to speak out when they’ve been victims of sexual misconduct, because now men in power are being held accountable for their behavior.

Women had a pretty good year in 2017, but since President Trump is the president, our friends on the left would have their membership in the angry feminist club revoked if they ever admitted this truth.

That aside, let’s not forget that 42 percent of women had no interest in voting to break the glass ceiling for Hillary Clinton in 2016. And we’re fooling ourselves if we think they’re going to vote to break it in 2020 just because another liberal woman shows up on the ballot.

Nevertheless, the liberal feminists are persisting. Democratic Senators Kirsten Gillibrand of NewYork, Kamala Harris of California, Amy Klobuchar of Minnesota and Elizabeth Warren of Massachusetts are all being talked about as possible 2020 Democratic presidential contenders. There’s also been speculation about Oprah Winfrey and Facebook executive Sheryl Sandberg, though neither has shown any sign of planning to run.

It seems as though the Democrats are just throwing whatever viable liberal female names they can out there, in hopes one of them will stick and that will be enough to make the glass come crashing down on Election Day. History has a way of repeating itself. It didn’t work in 2016 for Hillary and it won’t work in 2020.

The first female president – the one who makes history and blasts through that glass ceiling – won’t be a token woman elected out of anger for past elections lost or past presidents despised. The first female president will be elected on her own merits – because of her accomplishments, her intelligence, her strength, her substance and her ability to lead our nation. She will stand out, not blend in.

Nikki Haley has already set herself apart as one of the most effective leaders in this administration. She’s fearlessly stepped up, stood out and proven she's not afraid to make the tough calls. She does anything but blend in, which is why she is far more likely to see the Oval Office long before any of the liberal feminists taking a number and standing in line for 2020.