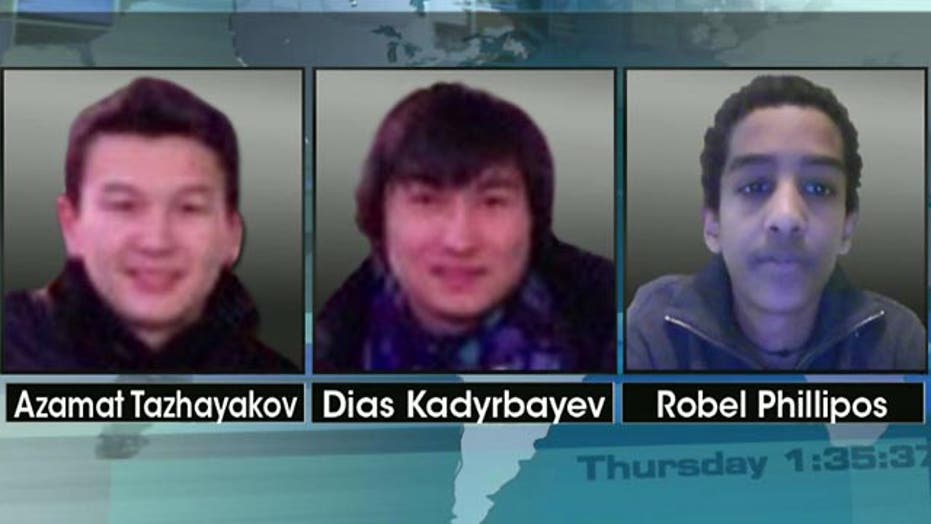 In the aftermath of the Boston Marathon bombings, Robel Phillipos, a high school and college friend of Dzhokhar Tsarnaev, reportedly called his friend and former college classmate Dias Kadyrbayev, mentioning that their buddy Dzhokhar Tsarnaev looked a lot like one of the  suspects.

Kadyrbayev then texted Dzhokhar about the similarity, receiving back a text that read, “lol [laughing out loud]” and “you better not text me. Come to my room and take whatever you want.”

But that ominous communication from the man now charged with killing three people and maiming hundreds in Boston did not prompt his friends call the police.

Instead, Kadyrbayev allegedly reached out to a third friend, Azamat Tazhayakov.

Then, the three of them allegedly went to Tsarnaev’s University of Massachusetts dorm room. They took his computer, his backpack, laptop and other clues that may have substantiated his guilt.  Then two of them helped dispose of the evidence.

A report on FoxNews.com sums up the situation as it now stands: “Phillipos, faces up to eight years in prison for ‘knowingly and willfully’ making materially false statements to federal investigators — a charge that carries stiffer penalties than those faced by other two suspects arrested Wednesday, Kadyrbayev and Tazhayakov.”

The latter two each face a five-year prison term if convicted of obstruction of justice for allegedly removing items from Tsarnaev’s dorm room.

Legal experts say the disparity proves the old axiom that “it's not the crime, it's the cover-up.”
The alleged behavior of Phillipos, Kadyrbayev and Tazhayakov could lead some to believe that they had information related to the attack, before it happened—that they were co-conspirators.  For how can we explain them suddenly learning that an individual they knew had murdered people and might murder more people, but doing nothing to prevent it?

Yet, these three were not the only ones who stayed mum about Tsarnaev.

Neighbors of Dzhokhar and his brother Tamerlan, interviewed after Dzhokhar was in custody and Tamerlan was dead, also said that they thought they recognized the alleged bombers from photographs distributed to the public, but did not call police.

Presuming the three young men (Phillipos, Kadyrbayev and Tazhayakov) are not terrorists, what psychological forces could explain these three allegedly helping a suspected mass murderer cover his tracks, while other people stayed silent about him and his brother?

What made them all interfere with an investigation or do nothing to aid it?

Yes, there were heroes aplenty in Boston.

There were bystanders who did not stand by, rushing into the chaos of the explosions and extracting the injured.

There were doctors who rushed to their operating rooms. There were runners who ran to help the fallen.

Yet, what do we make of those who could have spoken up, in the days that followed the bombing, but did not?

The common thread these people may share could be that, absent anyone watching, many, many people feel little connection with their communities and are willing to risk very little to stand up for them and preserve them.

Like it or not, they act in a hyperbolically self-focused manner—to preserve personal friendships over public safety and their own privacy over the public good.

In their heart of hearts, many people are profoundly ambivalent about how much they care to identify with “the state,” especially those who enforce its laws.

While those from nations with unreliable governments and predatory security forces may be especially loathe to actively join law enforcement initiatives, I believe this stance has only become more prevalent as the government of the United States has infantilized its population. Our government  is sending a subliminal message, suggesting that a supremely powerful nanny state can parent us all, that we need never grow up, nor rise to the occasion in our own lives or in the lives of others.

In stark terms: real adults take action when it’s needed; children wait for their parents to give the all clear.

I noted in the aftermath of the Boston bombings that Massachusetts Governor Deval Patrick, a man who threatened to jail for a year anyone who drove on the streets after a recent snowstorm, warned everyone in the Boston area to stay inside, lock their doors and open them only for uniformed officers.

This sort of edict does nothing to promote individual initiative, nor to telegraph a partnership of equals in the relationship between a state and its citizenry.

His instructions and tone were consistent with the dynamic I speak of:  in-keeping with the paralysis of some who might, otherwise, have felt like being true patriots just days after Patriot’s Day, by doing the right thing--: picking up the phone and calling the cops on killers.

We already know that the “bystander effect” can silence and stymie people who witness horrible violence, yet draw their shades or drive right on by.

People are, frighteningly, able to walk past a person having seizures on the street, if others seem inclined to walk past him, too.

We already know that video games and “reality” TV can hobble real reality and make it seem less compelling.

We already know that the Web, in general, and social media, in particular, can make people think they are connecting, when they are really disconnecting and becoming estranged from the community.

Consider this description for the content of an upcoming symposium at Suffolk University, in Massachusetts: "The invention of the Internet has opened an entirely new world of communication and, therefore, organization.  With so much power now in the hands of the individual, one questions whether we need institutions anymore."

The fragile concept of individuals acting with autonomy, but on behalf of large groups, including this culture, means we need to do everything we can to preserve and nurture it.

We need to save it from the psychological quicksand on the path of thinking like children being cared for by an all-powerful mother.

Individual initiative, in service to others, can be taught—and should be taught—in schools.  I am not speaking here of nebulous community service requirements, by the way.  I am speaking of envisioning scenarios that will require quick and decisive action, and teaching kids to be the ones who lead.

When Mayor Michael Bloomberg in New York tries to outlaw large sugary sodas, and Governor Patrick in Massachusetts tries to outlaw driving in the snow, and parents are told they have no right to know that their 15-year-old daughters are triggering abortions with Plan B pills, and misguided Senators and Congressmen in Washington try to outlaw the guns and ammunition people can use to defend themselves, they teach the opposite of autonomy.

They do nothing to connect people to their government as powerful individuals, in their own right, with their own rights.  And they risk dissolving them into the status quo of silence and inaction.