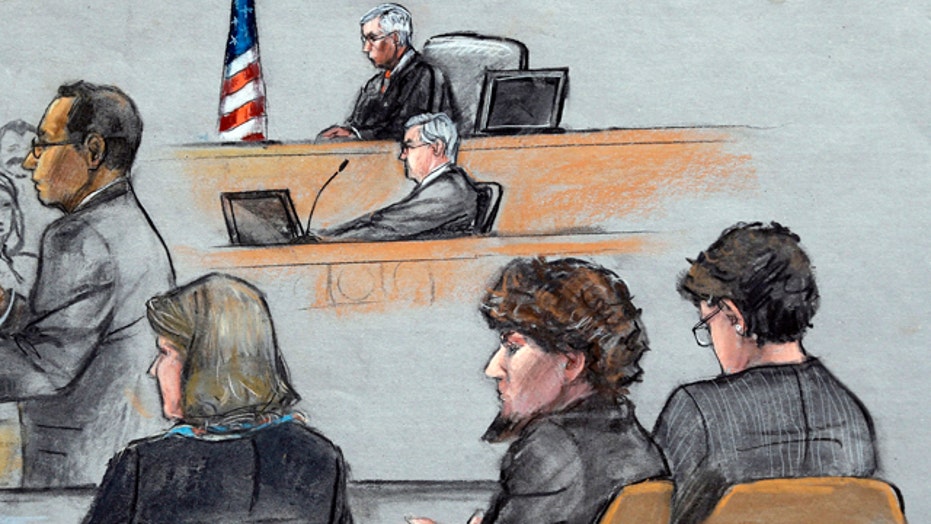 Will Tsarnaev jury agree to the death penalty?

Now that a Boston jury has found Dzhokhar Tsarnaev guilty of all 30 charges against him in the Boston Marathon bombing, these same jurors must render another determination -- life or death.

This is a decision that can haunt jurors for the remainder of their lives. Do they want to play a direct role in the killing of another human being? Can they live with their conscience, one way or another?

This one is much harder. This is a decision that can haunt jurors for the remainder of their lives. Do they want to play a direct role in the killing of another human being? Can they live with their conscience, one way or another?

This is a decision that can haunt jurors for the remainder of their lives. Do they want to play a direct role in the killing of another human being? Can they live with their conscience, one way or another?

These jurors have not seen the placards carried by protestors outside the federal courthouse which read, “The death penalty is murder.” But surely they know the sentiment expressed. They also know the attitudes of the community in which they reside. Once the jurors make their decision and the trial concludes, they will return to their homes and their lives.

And their neighbors will know.

In a recent poll, the vast majority of Bostonians said Tsarnaev should be sent to prison for life, not condemned to death. The numbers are startling, given how Boston has been terrorized and victimized by such horrendous acts of violence: 62 percent preferred a life sentence, while 27 percent chose death.

But the collective opinion expressed in the poll is reflective of Massachusetts’ long reputation for liberal views, especially when it comes to capital punishment. There have been no executions there under a state death penalty law since 1947. The fact that this is federal case is of no consequence. The jurors are pulled from the Boston area.

The decision by these jurors on whether to execute Tsarnaev must be unanimous. They will wrestle with their own beliefs. But they may also be influenced, consciously or subconsciously, by the feelings and judgments of those who surround them beyond the courthouse steps.

It is called “the conscience of the community”. It can be both subtle and powerful. The defense team may be glad their five attempts to move the trial out of the city and state were rejected.

All twelve of the jurors have been “death penalty qualified.” That is, during questioning before trial they said they were open to sentencing Tsarnaev to death. Those who could not do so were excluded. This is a legal requirement in any capital punishment case.

However, a close inspection of these jurors reveals that some have stronger opinions, if not convictions, on the subject. For example, one male juror said, “Death can sometimes seem like an easy way out.” A middle aged female juror advised that when she was younger she was against the death penalty, although she is more open to it now. An older woman said she always assumed she was against the death penalty and she would lean against it, but her position is not set.

These three jurors might be the most likely ones to vote against death. Remember, it takes only one juror to refuse to impose lethal injection in order to send Tsarnaev to prison for the rest of his life.

The defense probably wishes that a woman who remains as an alternate juror was serving among the twelve who will deliberate. She announced she was personally opposed to the death penalty, but knows she has to follow the law even if she doesn’t like it. Prosecutors likely dodged a bullet there.

The federal criminal code identifies what specific factors should be considered in determining whether a sentence of death is justified. If the “aggravating factors” outweigh the “mitigating factors”, then jurors shall sentence the defendant to death.

Expect prosecutors to show evidence of the following aggravating factors: Tsarnaev used weapons of mass destruction, committed acts of terrorism, engaged in substantial planning and premeditation, intentionally killed and attempted to kill more than one person, harmed victims that were particularly vulnerable (minors), and committed crimes that were “especially heinous, cruel, or depraved”.

Defense attorneys will counter with evidence of mitigating factors: Tsarnaev had no prior criminal record, was mentally and emotionally disturbed because of trauma he had suffered, was intellectually underdeveloped, had an impaired capacity to appreciate the wrongfulness of his conduct, and was under “unusual and substantial duress”. Most of all, his lawyers will argue that their client was an unwitting pawn of his older brother, who was far more culpable.

The Blame the Brother Defense

In the penalty phase, jurors will hear and see contrasting pictures of Tsarnaev. Prosecutors will portray him as a heartless monster and dedicated terrorist who cared nothing whatsoever about the innocent, precious lives he so callously took.

But Tsarnaev’s lawyers will mount a “blame the older brother” defense, portraying Tamerlan Tsarnaev as the sole architect of the Boston bombings –a domineering sibling who manipulated, brainwashed and controlled his younger brother. In other words, Tamerlan was the real villain, while Dzhokhar was the nescient dupe who was forced to participate. Yes…it is a long shot, but the defense has little else to argue.

The defendant chose not to testify in the guilt phase of the trial. That, of course, was a no brainer. Tsarnaev would have been destroyed on cross examination.

However, the penalty phase presents a different calculous. An expression of remorse can be a powerful mitigating factor if it is perceived as sincere. If defense attorneys feel as though jurors are disposed toward imposing death, they may roll the dice and put their client on the witness stand. It is a highly risky gambit because a skilled prosecutor can eviscerate a defendant on cross examination, if given half the chance.

Which is why Tsarnaev’s lawyers must try to reduce that chance by limiting their client’s direct testimony if he takes the stand. Normally, prosecutors can only cross examine a witness within the scope of his direct examination. Therefore, Tsarnaev’s testimony would have to be tailored narrowly to an expression of his regret or remorse (assuming he has any). Anything more would open the door to a full-blown and devastating cross. But the defense must get a ruling in advance from the judge before undertaking such a perilous maneuver.

Every civic student learns it is a Constitutional right to remain silent; a defendant in a criminal case can choose not to testify. Timothy McVeigh, the Oklahoma City bomber, decided to invoke that right. He sat at the defense table and never approached the witness stand. He was executed.

While it is true that jurors are instructed they may not hold such silence against the accused, many of them do. They yearn to hear something, anything, from the defendant, and they often hold it against him if he does not speak. This may be especially true of Tsarnaev, who has appeared aloof and unmoved by the heart-wrenching testimony that has brought so many tears during the trial. Just a few words of contrition or repentance from his lips might spare his life.

When jurors retire to deliberate the fate of Tsarnaev, they will weigh the various aggravating factors against the mitigating ones. This is not a simple quantitative analysis or mathematical computation in which, for example, five factors outweigh four. It is more of a qualitative formula or a subjective estimation. A single, but vastly important, factor might well outweigh several others.

In the end, jurors in capital cases tend to go with what their gut tells them. Often, they debate which is a worse punishment for a heinous killer: spending the rest of his life in the equivalent of a cage… or lights out courtesy of a needle?

As one of the jurors in the Dzhokhar Tsarnaev case said, “Death can sometimes seem like an easy way out.” I’m betting he’ll broach that argument when the jury door shuts behind him.