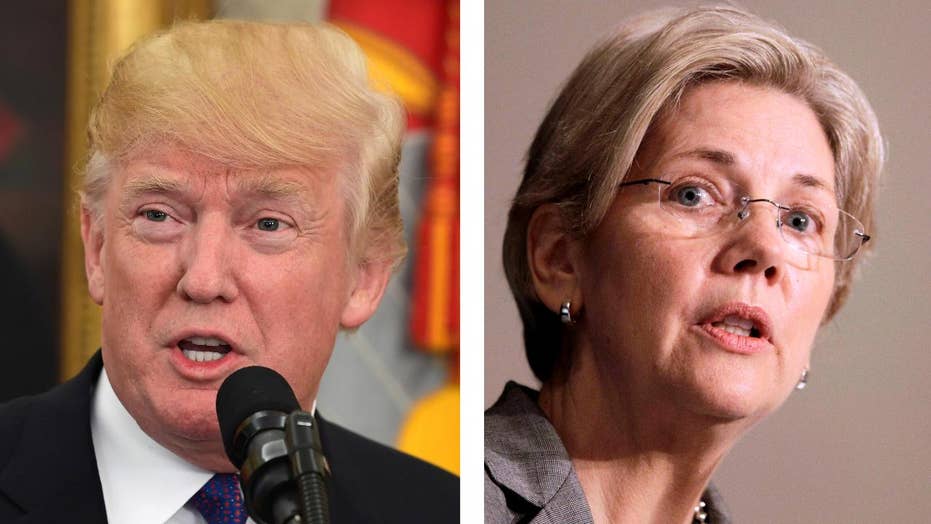 I admit, I laughed out loud when I read that President Trump had called out Pocahontas, aka Senator Elizabeth Warren, in the midst of his celebration of Navajo Code Talkers.

It was just so outrageous, so Trumpian and unprovoked. It looked like the president ran dry of things to say about the Native American World War II heroes, so inserted his little joke before lauding them for their bravery and service.

The allusion to liberal firebrand Warren appeared to have sailed over the veterans’ heads; the same could not be said of the liberal press.

I laughed in part because out of nowhere -- yet another hum-drum White House ceremony -- Trump had again set the world on fire, and in part because I could predict with 100 percent certainty what was about to rain down upon his totally welcoming head.

Almost immediately the ever-outraged Elizabeth Warren complained to CNN's Anderson Cooper that “President Trump couldn't even make it through a ceremony to honor these men without throwing in a racial slur.” That line was picked up in critical articles in the New York Times and Washington Post; the liberal intelligentsia was simply appalled.

What is rich, of course, is that the fury unleashed on Trump for referencing Warren’s pretense to Native American heritage is mountains more intense than the criticism leveled at the Massachusetts senator for making the claim in the first place.

In this era, when people are called out for “cultural appropriation” if they wear sombreros or Viking helmets for Hallowe’en, how can we ignore the fiction that Warren apparently created and that she is accused of using to advance her career?

It was during Warren’s 2012 senate race that the issue of her Native American claims first surfaced. During the course of that campaign, her opponent Scott Brown revealed that in both her applications to Harvard and Penn, “she checked the box claiming she was a Native American” and criticized her for pretending to be a “person of color.”

A reporter asked Warren about a 1998 story in the Harvard Crimson quoting a university spokesman who defended Harvard’s lack of diversity by claiming that Warren was Native American.

Overnight the senator was accused of having won her post by pretending to be something she was not.

She pushed back, saying that her mother’s family, coming from what Warren calls “Indian Territory” and the rest of us call Oklahoma, had long told stories about their Cherokee ancestry.

She never could document that heritage, nor could reporters who dug deep into her background. Even the Washington Post, running an exhaustive review of the claims and counter-claims, finally gave up and refused to rate Warren’s story.

Nonetheless, she continues to maintain that the affiliation was family lore, and she believes it. She also says that former employers, including Harvard, hired her for her talent, and not her heritage, even as they took advantage of it.  According to CNN, “They singled her out, Warren later acknowledged, because she had listed herself as a minority in an Association of American Law Schools directory.”

Whether the Massachusetts’ senator’s claims are true or not, Donald Trump has effectively latched onto what he considers a vulnerability, as he so often does. Why would he have chosen to ruffle Warren’s feathers Monday? Perhaps because she was about to become the most vocal advocate for the rogue Consumer Finance Protection Bureau (CFPB), which the Trump administration wants to emasculate.

The CFPB was the brainchild of Elizabeth Warren, who is as passionate in her hatred of banks as she is about her Cherokee heritage.

Having spent much of her childhood terrified that her father’s serial business failures might cost them their mortgaged home, Warren grew up with an intense hostility towards the financial sector. (This is true, and is generously documented in her autobiography "A Fighting Chance.") Her suspicions and dislike of bankers multiplied throughout the financial crisis, which she (erroneously) pinned on a lack of regulation.

Hence, she saw the CFPB as a vital new weapon against the misbehavior that caused the financial meltdown. Because of her distrust of the power and reach of banks, she insisted the new agency be totally independent of Congress and the White House. As such, it is without oversight or accountability and, we now know, prone to abuse.

The Trump administration has installed OMB head Mick Mulvaney as acting chair in the wake of former head Richard Cordray’s surprise resignation. The move is being challenged by Leandra English, appointed by Cordray. As a court battle brews, we will be relitigating the value and structure of the CFPB. Warren will take the lead in that discussion.

What better way to undermine Warren’s passionate defense of the CFPB than by reminding voters of her questionable claims of Native American blood, which sound somewhat silly. Consider this pearl, extracted from a 2012 NPR interview, “I am very proud of my heritage. These are my family stories. This is what my brothers and I were told by my mom and my dad, my mammaw and my pappaw.”

One wag posted on Twitter, “Trump and Elizabeth Warren should bury the hatchet.” That’s not going to happen anytime soon – this is too much fun for Trump, and much too useful.