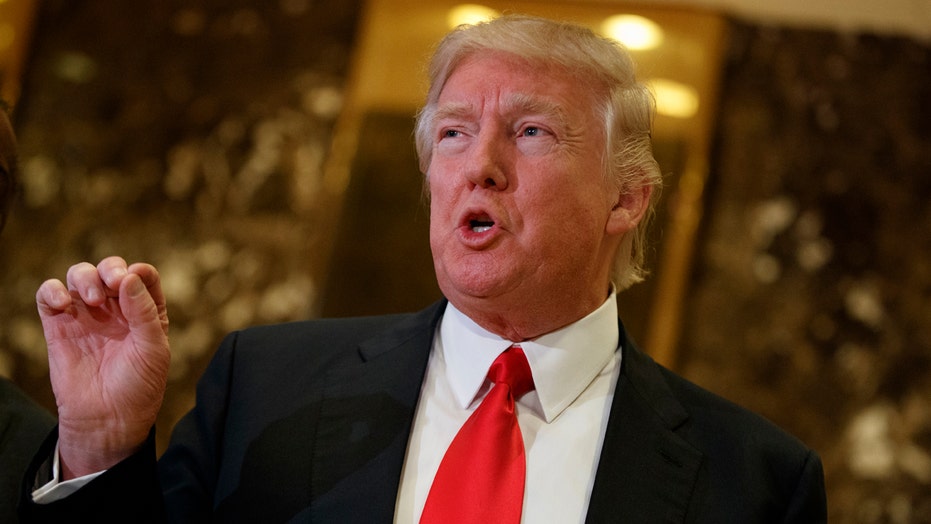 Trump team maps out schedule for first days in office

For President-elect Trump, boosting economic growth and creating more good-paying jobs recovery will not prove easy. George W. Bush campaigned on -- and delivered -- lower taxes and more limited government, but his economic expansion was no more robust than Barack Obama’s and ended with the 2007/08 financial crisis.

Mr. Trump has promised a lot that will be difficult to accomplish, because federal resources are limited. Without any new tax or spending initiatives, the federal deficit will grow as more baby boomers retire, and congress will not always cooperate.

Still public confidence is as important as government policies for inspiring growth, and he can still spell out a robust agenda during his first 100 days. Here are five things to look for in the new president's first days:

Repealing ObamaCare is easy but replacing it requires the GOP to craft programs to insure Americans with pre-existing conditions and who need financial assistance can obtain coverage.

Other challenges abound but to address those issues Mr. Trump will confront an essential reality. Americans pay 50 percent more for medical services and drugs than do Europeans, many of whom like the Germans have private insurance systems similar to ours.

Federal and state programs are two-thirds of health care spending, and those often permit service providers to drive up prices rather than contain costs. More competition, as congressional Republicans prescribe, may help but the Germans have found they simply must regulate prices to stem profiteering by pharmaceutical companies and the like.

American businesses are terribly handicapped in global competition by paying too much for employee health care, and Mr. Trump needs to spell out how he expects to lower, not merely contain health care costs.

It is quite difficult to see how Mr. Trump can cut taxes, if as Treasury Secretary-Designate Steven Mnuchin promises, upper income Americans will see no overall tax cut but rather only rates lowered as permitted by curtailing tax credits and deductions. The top 20 percent already pay about 84 percent of income taxes, hence any meaningful reductions would virtually eliminate income taxes for most Americans. That would only encourage most voters to elect officials who spend profligately.

Trump should table a plan to simplify the personal tax code and lower rates enough to provide a modest cut for everyone. That would encourage small businesses—which generally file under personal, not corporate, laws—to create more jobs and in turn pay for the tax cut.

Eliminating special deals to lower corporate rates would boost investment by larger businesses. Rebating taxes on exports and applying those to imports, as proposed by Ways and Means Chairman Brady, would generate $100 billion in new revenue, which could fund general tax relief and infrastructure improvements.

Additional spending on roads and other public facilities could provide a quick boost to growth but Mr. Trump must avoid Mr. Obama’s pitfall of relying on slow federal and state procurement processes.

He should send to congress a plan to distribute money directly to the state and local governments with “use or lose” deadlines but subject to broad guidelines. Local governments have lots of schools, bridges and the like in queue for repair and replacement. Private accounting firms could audit spending to ensure funds are used properly.

Federal money could be spent better too. Gas taxes should fund roads not bike paths or high salaries for big city mass transit workers. Eliminating Davis-Bacon rules that union labor be used on federally-assisted projects would trim costs by 20 percent.

Mr. Obama imposed a record number of regulations—many of which impose needless constraints on growth. Some, imposed by executive order, are easy to repeal but most will require congressional action or laborious processes to write new regulations and public comment that can take years. Mr. Trump’s team should put together a list of what needs doing and send a grand deregulation bill to congress. Then it’s up to the GOP in congress to show Americans how serious it is about quick action.

Imports exceed exports by about $500 billion. That kills millions of jobs directly and lowers annual growth substantially by curtailing investments in R&D.

China accounts for about two-thirds of the trade imbalance and its undervalued currency is a problem. However, so are its high tariffs, administrative barriers to U.S. exports, pirating of intellectual property and other trappings of its socialist-market economy.

Some change can be forced with a 45 percent tariff but Beijing’s culture would inspire new, even more opaque protectionism.

In addressing China, Mr. Trump should seek balanced trade while acknowledging that its system is not about to become a western-style market economy, and work to manage trade to eliminate the bilateral trade deficit.