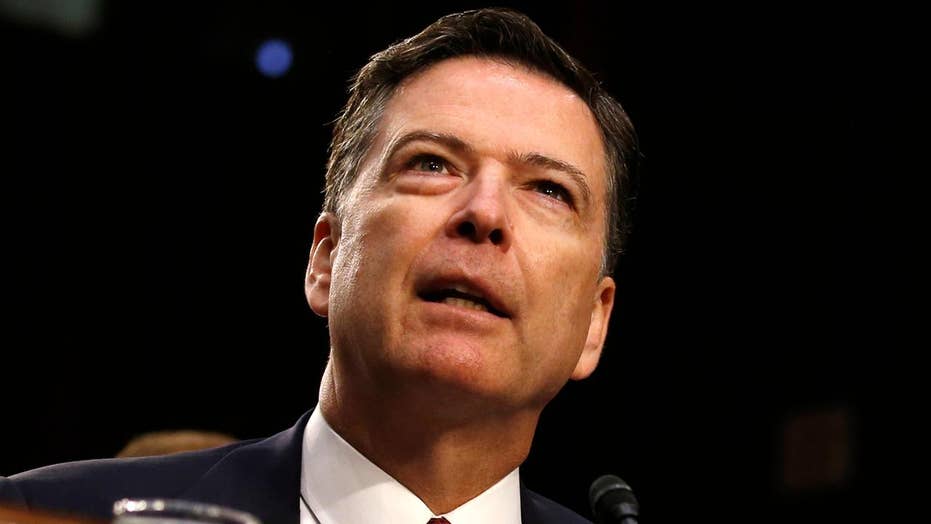 Was the press coverage of Comey hearing fair and balanced?

Did the media do its job covering the former FBI director's testimony? Fox News contributors Ellen Ratner and Tammy Bruce join the debate

Let’s be honest: nobody “won” on Thursday. Any day that the president of the United States, the Justice Department, the FBI and the national media are shown to be untrustworthy and are slimed on worldwide TV is not a good day.

As millions watched, James Comey, former head of the FBI, threw everyone but himself and his agency under the bus, but from his testimony we know that he, too, is ethically compromised, as was the FBI.

What Russia’s news media is calling “Comey Day” will not be celebrated in the years to come.

Where do we go from here? As pundits on the left and right continue to burrow into Comey’s written testimony, his answers, his twitches and psyche, claiming victories and vindications, most Americans might be experiencing the kind of hangover you get from drinking too many mojitos. All that sugar and tequila tastes great going down, but there’s a nauseous aftertaste the day after. For sure, it will be a while before we want to go through it all over again.

Unhappily, the multiple investigations into theoretical “collusion” between Trump aides and shadowy Russians will plod on, Democrats will continue to search for evidence that Trump tried to obstruct the inquiries, Republicans will hunt down leakers like bloodhounds on the scent – and most of us will go back to work pretty convinced that it is all a giant waste of time. We will have concluded, based on the hearings and the anonymous sources and the rumors and speculation, that no one has hard proof of any of the allegations. And never will have.

Just as Republicans will forever see Hillary Clinton as guilty of multiple criminal misdeeds, including obstruction of justice, and excused only because of political favoritism, Democrats will always be sure that Donald Trump pushed Comey to abandon his investigation into Michael Flynn and that somebody on his team asked the Russians to undermine Hillary’s campaign. That’s where we are, and most likely nothing will change those assumptions.

Meanwhile, America’s frustration will continue to build. The issues that elected Donald Trump – sluggish wage growth, wariness of globalization, outrage over political correctness that steps on common sense, our obviously failing infrastructure, concerns about terror – have not receded.

As in the UK, where voters shocked the establishment by calling for Brexit but then just turned on a dime and tossed out the party set to deliver on that demand, Americans could continue to surprise us. If Republicans and President Trump fail to deliver on election promises, they could be pummeled in 2018 and again in 2020.

The savaging of President Trump by the media and the smoke enveloping the White House does not give the GOP a license to stall. They are on the clock. Many in Congress are concerned that the president’s falling approval ratings will hurt their own reelection prospects come 2018, and Democrats certainly expect that to be true.

They should give American voters more credit. They are tired of the president’s careless tweeting, and they enthusiasm has waned, but they still look to Republicans to fix what is most broken.

In the latest Morning Consult/Politico poll, voters list economic and security issues as their top concerns; they also credit the GOP as better equipped to deal with those concerns. On jobs, the GOP is favored 44% to 38%; on the economy the advantage is 44%-37%. On national security, voters also give the GOP the edge: 47% to 35%, while on immigration Republicans come out on top as well: 44% to 39%.

That doesn’t mean the GOP can relax. The third most important issue for voters, not surprisingly, is healthcare. Here, despite the unraveling of Obamacare, Democrats are the clear winners: 48% to 35%.  We are facing a hard truth: once the country enjoys an entitlement, it never wants to let it go.

Republicans have not exactly covered themselves in glory here. After years of blasting the not-so-Affordable Care Act, the country was stunned that the GOP’s cupboard was bare when it came to a replacement plan. It is true that no one should see legislation being made, but in this case the resulting sausage is even uglier than usual.

Many have thought the Republican leadership erred in first targeting the repeal and replacement of ObamaCare. It was a mistake only if they can’t come up with a reasonable compromise that makes life better for the majority of the country. And then sell it to voters. Given the soaring premiums flowing from ObamaCare, that should not be impossible.

Democrats are also winners on handling the environment; after President Trump bowed out of the Paris accord, this is a headliner, but historically climate change does not rank high on the list of Americans’ concerns. The GOP has done an especially terrible job of explaining why the Paris treaty was not beneficial to the U.S. Rather, President Obama and the compliant media did an excellent job pretending the agreement is meaningful and helpful; it is, in fact, neither. But Americans don’t know that.

The country needs strong leadership to remind us that our nation has survived much greater tests than a president’s furious tweeting or James Comey’s vengeance or Hillary Clinton’s bitter “excuses” tour. Right now, that must come from Republicans; they are the party in charge and they must take the reins.

The best way to allay Americans’ concerns about the durability and effectiveness of our messy Democracy is to show it in action. Mitch McConnell, Paul Ryan and others in leadership positions need to move the Trump agenda forward.

Their futures, and the future of the country, depends on it.