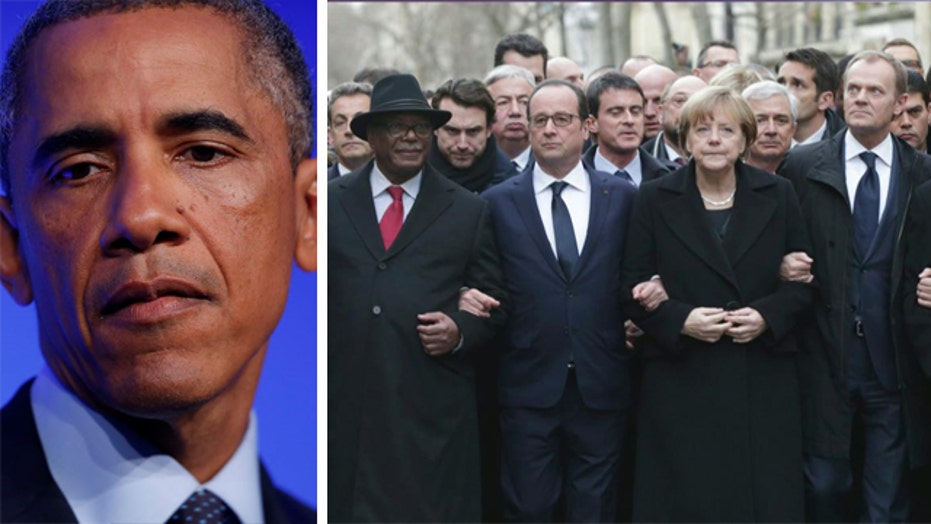 Some 40 world leaders marched together in a unity rally Sunday in Paris in what the New York Times banner headline dubbed a “Huge Show of Solidarity Against Terrorism.” Forty world leaders were present, but not President Obama, who was conspicuous by his absence. Not only did the leader of the free world decline to participate, Vice President Joe Biden couldn’t be bothered either, or Secretary of State John Kerry (who was busy hectoring India’s head of state over climate change), or Attorney General Eric Holder -– who was actually in Paris for an anti-terrorism summit.

If only the world had convened to protest “workplace violence”! Then, perhaps, Mr. Obama would have felt the need to turn out.

The no-show is yet another indication of President Obama’s vacillation in the face of Jihad.  What is it about confronting radical Islam that so rattles the president? Time and again he has skirted calling acts of savagery – from ISIS, or Al Qaeda, or whatever other monstrous group ascends the stage – the work of Islamic terrorists. Even when sending our nation’s condolences to the French people, he could not bring himself to blame the Charlie Hedbo murders on radical Muslims.

His reluctance to call out the jihadists who have so spectacularly waged war on the west is bizarre, especially for a fellow credited with finely tuned political antennae.

As Americans reeled in horror after witnessing the beheading of James Foley, Obama had to remind us that “ISIS is not Islamic” because “no religion condones the killing of innocents ...”

That may be true, but the thugs that have raped and pillaged their way across Syria and Iraq, believe they are Islamic. The fellows who murdered cartoonists at Charlie Hedbo – yelling “Allahu Akbar” -- did so because they insulted Mohammed – not Jesus. Walk like a duck, talk like a duck ...

Monday, A adefensive White House spokesman admitted they goofed in not sending a high-level emissary to Paris. There was some suggestion that there was not enough time to prepare the kind of security protection normally provided POTUS or other important U.S. dignitaries. Other heads of state presumably dealt with similar considerations, and decided the unity effort trumped their personal concerns.

Meanwhile, Attorney General Eric Holder was in Paris, attending meetings with his counterparts. But even he declined to join in the demonstration.

One wonders, was Obama watching football? It was a big day for the NFL; was he waiting to see another Chris Christie Dallas Cowboy hug-a-thon?

Or was it that Obama doesn’t like the idea of linking arms and marching solemnly with other world leaders. It is true that he does not do solemn well; taking selfies and having fun seems more his style. Maybe he is not comfortable being just one of many. We don’t know.

What we do know is that Obama’s famed political intuition is breaking down. Or, with no more elections in his future, he just really doesn’t care anymore (which many have hypothesized.)

Sunday’s miss was not as egregious as his skipping out to the links in Martha’s Vineyard shortly after speaking with the family of slain James Foley, but it’s close. Pictures of the president yucking it up with his golfing buddies minutes after addressing Americans about the gruesome beheading defined a new low in what the president calls his poor “optics.”

The problem is, it’s not just optics. Obama’s back-foot approach to confronting Islamic terrorism, and his unilateral (politically motivated) pronouncement that the war on terror is over, has cost the country plenty. Pulling troops out of Iraq and tripping over his chemical weapons “red line” in Syria helped spawn the rise of ISIS.

His recent declaration of the war’s end in Afghanistan may well turn out the same. Will the U.S. stand by and allow the Taliban to regain control of that unfortunate country? How many attacks on young schoolgirls will it take before we go back in? Or will the U.S. simply cede our role as the world’s good cop?

Similarly, do we feel safer in our own country with a leader who refuses to confront the reality of Islamic terrorism at home? Who cannot admit that the Ft. Hood murderer is a Muslim extremist? A leader whose quest for legacy means he is eager to free terrorists in order to shut down Gitmo?

Before the UN, Obama affirmed that “ the United States is not and never will be at war with Islam.” Rightly so. But, in that same UN speech, Obama said “it is no exaggeration to say that humanity’s future depends on us uniting against those who would divide us along fault lines of tribe or sect; race or religion.” President Obama had the opportunity to demonstrate just that unity in Paris; too bad he didn’t show up.