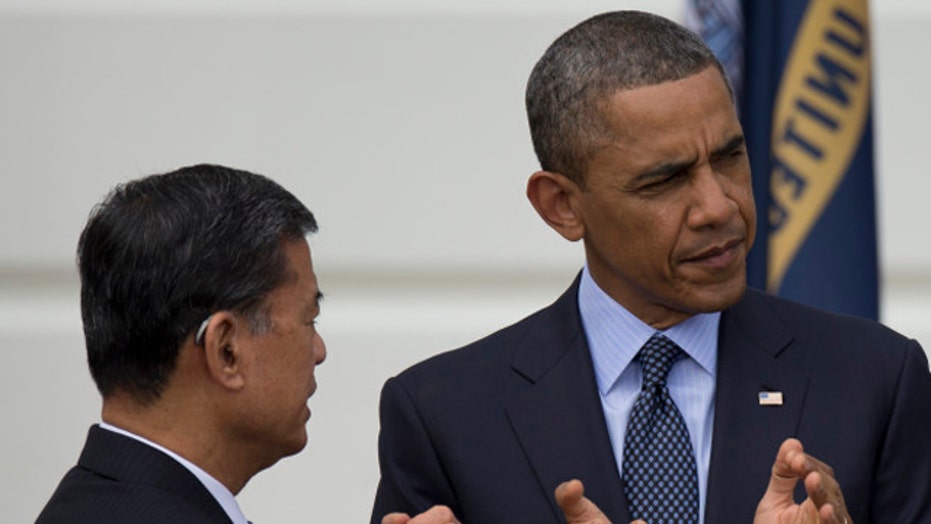 For the past five weeks, America has heard testimony from courageous whistleblowers, seen media exposés, and now has proof from the acting  Inspector General's (IG) report -- all of it pointing to one central and unfortunate truth: the Department of Veterans Affairs is a dysfunctional, corrupt, and severely mismanaged department that is failing America’s veterans.

The Twitter-sphere has aptly dubbed it the #VAscandal.  But at this point, it’s no longer a scandal—it’s a national disgrace of the highest order. The release of Wednesday's preliminary IG report on the Phoenix VA confirms our worst fears and deepest held beliefs—that delayed medical care and manipulating records is “systemic throughout” VA.

According to the report, Phoenix VA officially stated that veterans were waiting 24 days on average for care at their facility but they were actually waiting 115 days. The names of 1,700 waiting veterans at the Phoenix VA simply vanished, as if they never existed. Moreover, the IG has expanded the investigation to 42 VA facilities, not just the previously reported 26—underscoring an even more poignant hashtag: #NotJustPhoenix. The IG report goes on for pages upon pages with similar outrageous findings.

Bottom line: VA lied. Veterans died. And now it’s time for heads to roll and Congress to step up.
Just one week ago, the push for greater accountability at the U.S. Department of Veterans Affairs (VA) was gaining steam. With more facts emerging, and before this IG report, the House of Representatives passed the VA Management Accountability Act (H.R. 4031) as a first step toward reform at the dysfunctional department.

But now that good start is being jeopardized by a lack of action in the Senate, owing to a cynical political game on the part of the Obama administration and Senator Bernie Sanders of Vermont, chair of the Senate Veterans Affairs Committee.  A cynical game that, in light of today’s findings, should have every red-blooded American up in arms.

The bipartisan House vote for H.R. 4031 was stunningly lopsided, something we rarely see in today’s gridlocked Washington. The bill passed 390-33, with 160 Democrats and even Minority Leader Nancy Pelosi voting in favor of more accountability at the VA.

The support for the VA Management Accountability also stems from the bill’s directness, clarity and simplicity. Unlike the typical incomprehensible mishmash of logrolling and favor-seeking we see in most legislative fixes these days, H.R. 4031 is under 3 pages long, and entails a simple common-sense reform: it gives the VA secretary the authority to remove and replace executives who fail to perform. Period.

So after such a remarkable bipartisan endorsement from the House, what happens in the Senate? Sanders has declared he wouldn’t allow a vote on the bill, which would need to go through legislative hearings to study the proposal and determine its “implications.”

As a reminder, the bill is 3 pages long and the House has already held hearings.

As veterans wait on secret lists, have Harry Reid and Bernie Sanders had a chance to read the bill yet?  You bet they have. So why would Sanders slow-walk the bill? Based upon his recent public comments, he appears to be siding with career bureaucrats—i.e., the same people who have driven the VA into a ditch—over the needs of veterans.

Meanwhile, the Obama administration has already signaled opposition to H.R. 4031, suggesting the bill would open the government to the threat of litigation from fired employees.

So how can we expect this to play out? The Obama administration’s tepid response—marked by expressions of deep concern and the “firing” of a single VA undersecretary who was already set to retire in just a few weeks—suggests they’re hoping the scandal will burn out if they don’t give it too much attention.

In a few weeks, when the VA scandal drops from the front pages (which won’t happen if the organization I lead has anything to say about it), they’ll dismiss it as “old news” and cynically argue that their critics are motivated by partisan advantage. This has been the administration’s approach to previous scandals, and it’s worked before.

Meanwhile, Sanders will continue to stall the progress of the VA Management Accountability Act, and may even go so far as to reintroduce his own VA “reform” bill that failed in the Senate earlier this year. That bill would have dramatically expanded the VA’s responsibilities and provided billions in new funding—without fixing what’s wrong at the department. That’s a recipe for continued dysfunction and disaster.

The standoff on the VA Management Accountability is a case study in why Americans have lost faith in Washington. Many pundits lament the fact that Washington can’t achieve major accomplishments, but at this point most Americans would be satisfied with basic good governance. When it’s impossible to enact even the simplest and most straightforward of administrative reforms, such as the VA Management Accountability Act represents, it’s clear something is deeply wrong.

Which is why veterans, their families and taxpayers who care about government accountability should take up the cause and contact Harry Reid and Bernie Sanders. Demand that the Senate give the VA Management Accountability Act (sponsored by Sen. Marco Rubio) and up-or-down vote. Demand that senators go on record as either being for the bureaucrats or for our veterans.

Let’s not allow Senator Sanders, Senator Reid and the Obama administration to get away with burying this scandal. It’s time to send a clear message: veterans are the ones who are “mad as hell” and we will accept nothing less than action.

Pete Hegseth currently serves as a co-host of FOX News Channel's (FNC) FOX & Friends Weekend (weekends 6-10AM/ET). He joined the network as a contributor in 2014.
ADVERTISEMENT