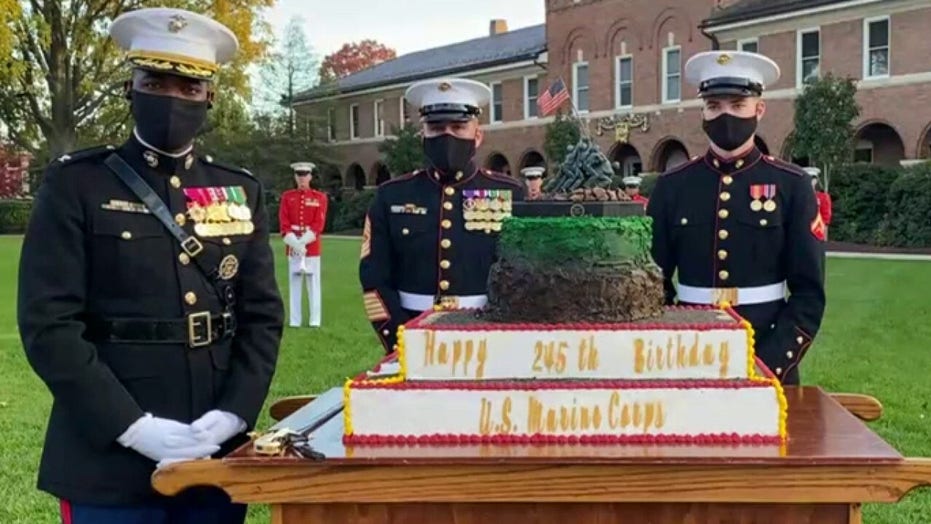 “Thank you for your service.”

Every Veterans Day, I look forward to that message from friends and family members. They all know I served, in part because so many of my stories begin with, “One time when I was in the Marine Corps…”

My response is always the same: “It was my pleasure,” and I truly mean it.

Just as often as I’m thanked for my service, I’m asked, “Why did you serve?” It’s a fair question, considering that we’ve had an all-volunteer force since 1974, so I didn’t have to do it. So when I think of how to answer that question, I reflect on my experiences from my last deployment.

In 2009, I was one of several thousand Marines taking part in Operation Khanjar, the start of President Obama’s “surge” of military forces and civilian advisers into Afghanistan’s Helmand Province.

Every day of that deployment, I carried a gun or had one within reach, patrolling in heavy body armor in areas infested with IEDs and insurgents.

FILE -- The author in the district of Nawa in Helmand province, Afghanistan.

For months, I’d get just four or five hours of sleep each day, but not always in a row. Instead, I was usually woken up by someone shaking me by the shoulder telling me we had to go on a patrol, the whistle and crack of rockets and machine-gun fire zipping over the walls of our patrol base, or the rumble of a helicopter circling overhead.

Whatever it was, I’d bolt up like I’d been sleeping on a spring and it felt like a scab had been ripped off my eyeballs when I opened my heavy lids.

I was constantly dirty, my feet stunk and itched, my skin was chaffed, and my shoulders ached. I had been shot at, sworn at, spit at, and had dodged a few rocks thrown at me for good measure.

I discovered a previously unknown sense of thirst, where my mouth got so dry it felt like a wire brush had been scraped along the top of my tongue.

I swigged water from a dusty plastic bottle that was at best room temperature, but the “room” was always at least 90 degrees.

I usually ate an MRE, but had my share of boiled goat meat served on a mound of rice when I ate with our Afghan partners. The former almost always guaranteed constipation and the latter, diarrhea.

I missed an anniversary, holidays, and family milestones, including the birth of a child who I wouldn’t meet until he was three months old.

It probably doesn’t sound fun to a lot of people, so what could I possibly have been thankful for?

For Marines like me, it’s the esoteric draw to service, something I’d call “Americanism.”

You can’t define it, for it’s simply a thing of spirit. You can’t touch it for it exists only in the hearts of those who understand its call. But you can sense it in the way Americans seek a way to solve any crisis that has been thrust upon them, helping the nation gain strength and unity in the process.

Lincoln described it at Gettysburg and Patrick Henry before him. Many others have described it in one way or another since.

“Americanism” can mean many things, but for those who have worn a uniform in service to our country, it is a divine birthright that carries with it the responsibilities of guardianship, earned by those who have known and seen oppression, fueled by the strength of free men alert to the evil winds that seek to blow it out.

The Marines I served with in Afghanistan in 2009 knew that sense of Americanism. That’s why they abandoned their selfish interests to deploy to a foreign land to embark on a collective effort more significant than anything they had ever before confronted in their lives.

In doing so, they became part of a tribe that transcended class, age, geography, religion, or education; a tribe that carried the pride not only of their nation but also of their Corps and its centuries of honor and sacrifice.

Their service – their commitment to Americanism – means that when the warriors of that magnificent tribe grow old, they know that they will never have to just read with envy about the brave deeds and accomplishments of other men, because others will read about what they had done. They did their job, and did it well. They represented the best of Americanism.

It was my honor – indeed, my pleasure – to have served with them.

On this Veterans Day, and every day, I’m thankful to have served.

Frank “Gus” Biggio served on active duty in the United States Marine Corps from mid-1993 until December 1997 after graduating from Denison University. Nearly ten years after first leaving the service, he rejoined the Marine Corps in October 2007. With his country at war, the same itch that drove him to volunteer in the 1990s drove his desire to serve again. He is the author of "The Wolves of Helmand" (Forefront Books, November 10, 2020).