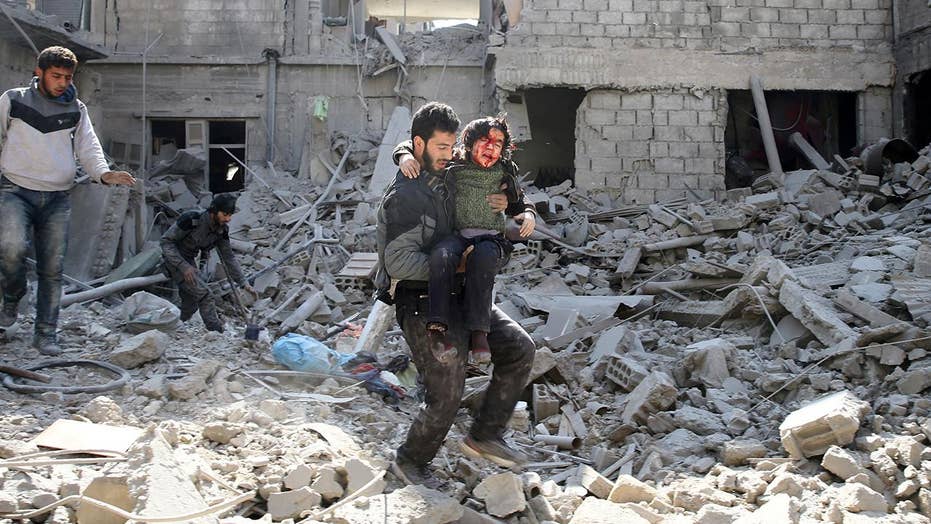 Atrocities in Ghouta, Syria: What to know

The latest tragedy unfolding in Syria is all too familiar – and getting worse. The U.S. is watching as Syrian President Bashar Assad and his backers, Iran and Russia, commit war crimes against a long-besieged population that dares to continue to oppose him.

But behind the canvas of suffering, increasingly there is a deeper issue: a policy of U.S. passivity that is eating away at our global posture and interests.

The target this time is a besieged opposition enclave known as Eastern Ghouta, on the outskirts of the capital, Damascus. Assad once again seeks to maximize civilian suffering to compel a surrender. The U.S. is again portraying helplessness.

The cost in lives is horrifying enough. Nearly 400,000 people live in this enclave, according to U.N. figures, and they are dying by the score under merciless air attacks, deprived of aid supplies and medicines as Assad intentionally targets hospitals.

U.S. passivity in the face of Assad’s violence not only deepens the humanitarian crisis, it also harms American national security. It strengthens jihadists’ claims that we are aligned with Iran and its campaign of sectarian slaughter. It undermines American credibility around the world at a time when multiple adversaries, including North Korea, Iran, and Russia, are probing American will to defend our interests.

The U.S. cannot claim to be containing Iran or standing up to Russian President Vladimir Putin while capitulating to Assad. Assad's gains are Iran's and Russia's gains – and our losses.

The U.S. cannot claim to be containing Iran or standing up to Russian President Vladimir Putin while capitulating to Assad. Assad's gains are Iran's and Russia's gains – and our losses.

America’s policy avoids entanglement in a messy conflict in the short term. But it will lead to worse dangers and larger conflicts in the future.

The Trump administration is trying to do better by imposing sanctions to compel a change in Assad's behavior. The Defense and State Departments are undermining even this tenuous approach, however.

Defense Secretary James Mattis said “we are not getting engaged in the Syrian civil war.” His statement signals that the U.S. has no intention of using force in support of diplomacy, thereby encouraging Assad to continue his indiscriminate violence.

Secretary of State Rex Tillerson’s diplomatic approach in Syria conveys the same message. It capitulates to Assad, Iran, and Russia by bypassing all of the confidence-building measures – such as the delivery of humanitarian aid – that would be required to get opposition groups to the negotiating table.

The U.S. has repeatedly hoped in vain that diplomacy will stop or contain the slaughter. American and U.N. diplomats have tried to use diplomacy to “freeze” the conflict on local levels when violence has precluded further talks. Their hope has been to transition back to negotiations after providing civilians a temporary respite from the bombing and enabling aid organizations to deliver some supplies.

None of it is working. Assad has hijacked this diplomatic approach, and the U.S. and United Nations have become complicit in the use of starvation as a weapon of war. Aid organizations route their deliveries through the Assad regime, which continues to block deliveries or redirect  supplies to regime clients. The effect has been to give Assad’s sieges diplomatic cover.

The U.S. has already watched history repeat itself in Homs, Aleppo, Darayya, and towns that made fewer headlines. But the U.S. hasn’t changed course. Instead, it is merely rebranding the freezes as “de-escalation zones.”

Assad has not de-escalated. He has continued to kill Syrians who oppose him by the thousands and put unknown numbers into prisons even when they do surrender. Eastern Ghouta will be no different.

America’s diplomatic approach undermines other strategic interests. A successful “freeze” of the Syrian conflict, even if it occurred, would leave in place Iranian forces and Iran’s proxies including Lebanese Hezbollah. It would prevent future military operations against Al Qaeda, which is embedded in opposition-held areas.

These outcomes have already occurred on local levels in southern Syria, where Iran’s proxies and Al Qaeda are entrenched beneath the cover of the U.S.-backed “de-escalation” zone.

The U.S. has lost sight of the relationship between diplomacy and war. American diplomats dealing with the Syrian crisis lack the leverage and credibility necessary to conduct effective diplomacy. The U.S. has used few other tools of national power to support them and has refused to contemplate using military force beyond self-defense or tactical retaliation for the use of chemical weapons.

Assad will continue to pursue all-out military victory as long the U.S. remains thus on the sidelines, and all diplomatic efforts except surrender will fail.

The U.S. is setting a precedent in Syria that will harm our ability to prevent future wars through deterrence and diplomacy. American adversaries are watching.

President Trump is conducting more effective diplomacy in Korea by signaling that he would consider using military force, hoping to incentivize North Korea to choose talks. But North Korea and China watch U.S. policy around the world and will wonder whether the U.S. has the necessary will to risk massive war in Korea.

U.S. behavior in Syria signals that we do not have the will to defend our interests or commit the resources necessary to achieve our stated goals.

The American homeland, American allies and American partners are less safe as a result.

Jennifer Cafarella is Lead Intelligence Planner at the Institute for the Study of War. She is the co-author of "Jabhat alNusra and ISIS:  Sources of Strength" (February 2016) and "Syrian Armed Opposition Forces in Aleppo" (February 2016), as well as the author of “Jabhat al-Nusra in Syria: An Islamic Emirate for al-Qaeda” (December 2014).