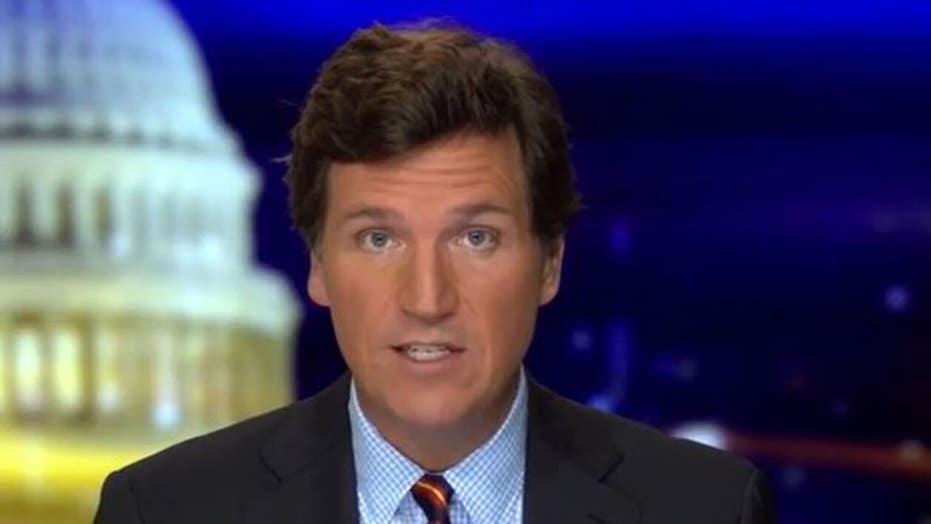 Editor's Note: This article was adapted from Tucker Carlson's opening commentary on the Oct. 15, 2020 edition of "Tucker Carlson Tonight."

Not everything you hear is untrue and not every story is complex. At the heart of the growing Biden-Ukraine scandal, for example, is a very straightforward question: Did Joe Biden subvert American foreign policy in order to enrich his own family?

In 2015, Joe Biden was the sitting vice president of the United States. Included in his portfolio were U.S. relations with the nation of Ukraine. At that moment, Vice President Joe Biden had more influence over the Ukrainian government and the Ukrainian economy than any other person on the globe outside of Eastern Europe.

Biden's younger son, Hunter, knew that and hoped to get rich from his father's influence. Emails published Wednesday by The New York Post, documents apparently taken directly from Hunter Biden's own laptop, tell some of that story.

"Tucker Carlson Tonight" have obtained another batch of emails, some exclusively. We believe they also came from Hunter Biden's laptop. We can't prove that they did, we haven't examined that computer. But every detail that we could check, including Hunter Biden's personal email address at the time, suggests they are authentic.

If these emails are fake, this is the most complex and sophisticated hoax in history. It almost seems beyond human capacity. The Biden campaign clearly believes these emails are real. They have not said otherwise. We sent the body of them to Hunter Biden's attorney and never heard back. So with that in mind, here's what we have learned.

On Nov. 2, 2015, at 4:36 p.m., a Burisma executive called Vadym Pozharskyi emailed Hunter Biden and his business partner, Devon Archer. The purpose of the email, Pozharskyi explains, is to "be on the same page re our final goals ... including, but not limited to: a concrete course of actions."

So what did Burisma want, exactly? Well, good PR, for starters. Pozharskyi wanted "high-ranking US [sic] officials" to express their "positive opinion" of Burisma, and then he wanted the administration to act on Burisma's behalf.

"The scope of work should also include organization of a visit of a number of widely recognized and influential current and/or former US [sic] policy-makers to Ukraine in November, aiming to conduct meetings with and bring positive signal/message and support" to Burisma.

The goal, Pozharskyi explained, was to "close down for [sic] any cases/pursuits" against the head of Burisma in Ukraine.

It couldn't be clearer what they wanted. Burisma wanted Huter Biden's father to get their company out of legal trouble with the Ukrainian government. And that's exactly what happened. One month later to the day, on Dec. 2, 2015, Hunter Biden received a notice from a Washington PR firm called Blue Star Strategies, which apparently had been hired to lobby the Obama administration on Ukraine. "Tucker Carlson Tonight" have exclusively obtained that email.

"Hello all ..." it began. "This morning, the White House hosted a conference call regarding the Vice President's upcoming trip to Ukraine. Attached is a memo from the Blue Star Strategies team with the minutes of the call, which outlined the trip's agenda and addressed several questions regarding U.S. policy toward Ukraine."

So here you have a PR firm involved in an official White House foreign policy call. How could that happen? Good question. But it worked.

Days later, Joe Biden flew to Ukraine and did exactly what his son wanted. The vice president gave a speech slamming the very Ukrainian law enforcement official who was tormenting Burisma. If the Ukrainian government didn't fire its top prosecutor, a man called Viktor Shokin, Biden explained, the administration would withhold a billion dollars in American aid. Now, Ukraine is a poor country, so they had no choice but to obey. Biden's bullying worked. He bragged about it later.

The obvious question: Why was the vice president of the United States threatening a tiny country like Ukraine to fire its top prosecutor? That doesn't seem like a vice president's role. Well, now we know why.

Viktor Shokin has signed an affidavit affirming that he was, in fact, investigating Burisma at the moment Joe Biden had him removed. Shokin said that before he was fired, administration officials pressured him to drop the case against Burisma. He would not do that, so Joe Biden canned him.

That's how things really work in Washington. Your son's got a lucrative consulting deal with a Ukrainian energy company, you tailor American foreign policy -- our foreign policy-- to help make him rich.  Even at the State Department, possibly the most cynical agency in government, this seemed shockingly brazen.

During the impeachment proceedings last fall, a State Department official named George Kent said it was widely known in Washington that the Bidens were up to something sleazy in Ukraine.

"I was on a call with somebody on the vice president's staff and ... I raised my concerns that I had heard that Hunter Biden was on the board" of Burisma, Kent recalled. This, he noted, could create a perception of a conflict of interest.

So how did the vice president's office respond to this concern? According to George Kent, "The message that I recall hearing back was that the vice president's son, Beau, was dying of cancer and there was no further bandwidth to deal with family-related issues at the time."

Family-related issues? This was America's foreign policy being tailored to Joe Biden's son. Five years later, Joe Biden still has not been forced to explain why he fired Ukraine's top prosecutor at precisely the moment his son was being paid to get him to fire Ukraine's top prosecutor, nor has Joe Biden addressed whether or not he personally benefited from the Burisma contract.

But there are tantalizing hints. On Wednesday, former New York City Mayor Rudy Giuliani published what he said was yet another email from Hunter Biden's laptop. It's a note to one of his children. At the end of the email, there's this quote: "But dont [sic] worry unlike Pop I won't make you give me half your salary."

What does that mean, exactly? Well, we don't know. There may be more detail on the laptop, but unfortunately, we don't have access to that. But the question remains, how has Joe Biden lived in extravagance all these years on a government salary? No one has ever answered that question. And the tech monopolies are working hard to make certain no one ever does.

Thursday morning, the New York Post published another story based on the emails. This one describes a business venture Hunter Biden was working on in China. One email describes a "provisional agreement that the equity will be distributed as follows ... 10 held by H for the big guy?"

The big guy? Is the big guy Joe Biden? If so, how much did Joe Biden get and how much of that came from the Communist Chinese government? Those are real questions, this man could be elected president in three weeks. But Twitter doesn't want you to wonder. It won't allow you to ask those questions. Twitter restricted the New York Post story as "unsafe," like it was a lawn dart or a defective circular saw. And that was enough for the Biden campaign.

All day Thursday, they deflected questions about Joe Biden's subversion of our country's foreign policy by invoking Twitter's ban on the New York Post story. So the tech monopoly censors information to help their candidate, that candidate uses that censorship to dismiss the story. One hand washes the other.

It doesn't matter who you plan to vote for Nov. 3, you should be terrified. Democracies cannot exist and never will be able to exist without the free flow of information. That is a prerequisite and without it, we're done. But companies like Facebook and Google and Twitter do not care because they don't believe in democracy. They worship power and they don't need to be consistent. Melania Trump's private phone conversations, the president's stolen tax returns, they were happy to publish all of that. But if you criticize the Democratic candidate, their candidate, you are banned.

"Facebook and Twitter have policies to not spread things that are utterly unreliable, that have been debunked, and where their origin is untrustworthy," Sen. Chris Coons, D-Del., said Thursday. "They're practicing their own internal controls, as I wish they had over the past four years ... An active Russian disinformation campaign in 2016 had an influence on that election. They are trying even harder in this election. I'm glad that they are managing the content on their own websites."

Chris Coons is a liar.

Not one word of this story has been debunked, not one word in those emails has been "debunked." And if it is debunked, we'll be the first to report it because we're not liars. But did you catch the phrase he wanted you to hear: "Russian disinformation"? That's what they're claiming these emails are. And it's all over the Internet, in fact-free, conspiracy-laden conjecture crazier than anything the QAnon people ever thought of.

But none of their garbage, their lunatic lies about Russia is ever censored by the tech monopolies. It's not "unsafe" because it helps Joe Biden. Therefore, you can read it.

And where are the real journalists, now that we need them more than ever? They're gone. They're cowering. They're afraid. They don't want to upset power. Jake Sherman of Politico, who claims to be a news reporter, actually apologized on Twitter for asking the Biden campaign about Hunter Biden's emails. These people are craven. They have no standards. They have no self-respect. Like their masters in Silicon Valley, they worship power alone.