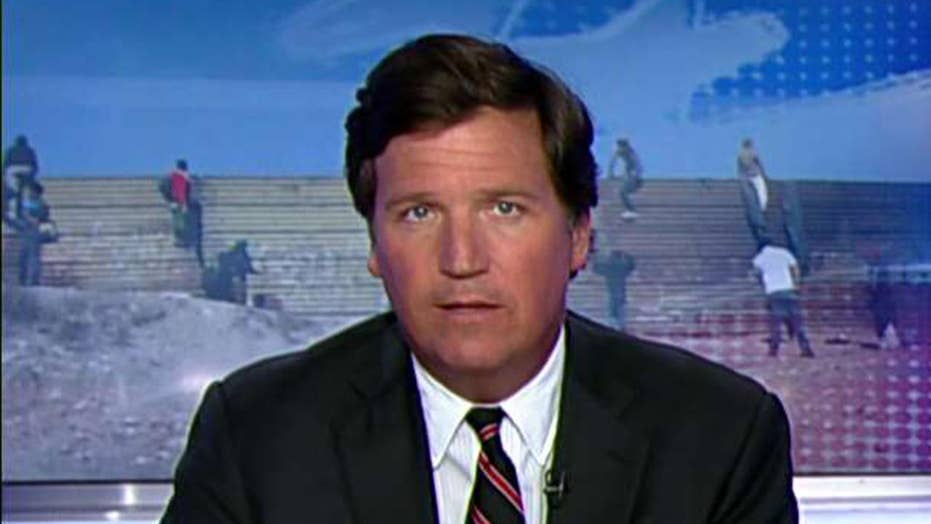 In a televised address to the country Tuesday night, the president made his case for why America needs a wall on our southern border, and why that wall is so important that it’s worth shutting down the federal government to get it. Democrats remained unmoved. Their leaders in Congress on the Democratic side, Chuck Schumer and Nancy Pelosi, delivered the party’s initial response.

Their words were then echoed with mechanical precision by Democrats up and down the chain, from sitting members of Congress, all the way down to the left-wing lady muttering in your local dog park. “Talking points” doesn’t do justice to the rhetorical discipline here. It was like watching a 3-D printer at work, churning out carbon copies of stilted propaganda, one after the other, after the other -- a miracle of replication. You might even call the Democratic response, “manufactured.”

" I’ll state that this is a manufactured crisis that’s been manufactured by the Trump administration," said U.S. Rep. Raul Grijalva, D-Ariz.

"What the president is doing is manufacturing a crisis," said U.S. Sen. Tim Kaine, D-Va.

"This president just used the backdrop of the Oval Office to manufacture a crisis," Senate Minority Leader Chuck Schumer said.

So, the Democrats have brought back "manufacturing."

One thing to know about our national media: if Democratic leaders are saying it, reporters are saying it, too. No matter what it is. You often hear conservatives complain that our media are “liberal.” That’s giving them far too much credit. What they really are is obedient, like Shih Tzus begging for a snack. If Nancy Pelosi called for invading Canada tomorrow, all the news anchors would be telling you how Ottawa is the real threat. They’re flunkies, humorless little functionaries doing their sad little jobs. They’re so dumb. They have no self-respect.

OK, we showed you the mindless lies they’re telling you. What are Democrats actually proposing as an alternative to the border wall? We can answer that with some authority because on January 3, House Democrats passed their own proposal that they say would secure the southern border.

What would it do? Nothing that isn’t being done already. The Democratic bill provides the same funding for partial fencing, border security technology, hiring more customs officers, and so forth, that we already have. In other words, the Democratic “border security plan” is the status quo. Their argument is that things work fine right now. Instead of spending another dollar to secure our border, Democrats in Congress have just proposed spending $12 million to investigate reparations for slavery, just to give you a portion of a sense of their priorities.

To Democrats, everything is more important than border security. That would be fine if our current security was working. It’s not. It’s likely that more 20 million people are already living in our country illegally right now. That’s more than two-and-a half times the entire population of New York City. The actual number may be bigger. We don’t really know -- and that's the point. It’s totally out of control.

Democrats feel good about letting in poor people from around the world. These are people who don’t make a lot of complicated demands about health care, dental or unfunded pensions or what their kids should be doing for a living. They’re not whiny, like Americans. They’re not living reminders of how politicians have failed to fulfill their promises. No. They’re just grateful to be here. They’re immigrants. Democrats love people like that. In fact, they’ve come to love them much more than they love you.

The problem isn’t that the Border Patrol doesn’t have the right technology. The problem is that our politicians don’t care to fix it. If they did, they could solve the problem in an afternoon. Borders are not complex. It’s not like we’re trying to cure pancreatic cancer here. "Our best minds are stumped." Hardly.

What worked for Hadrian will work for us. It works for Israel right now, and a lot of other places. Walls work. That’s why people still build them. Everybody knows that. This is all a charade. We should at least admit what’s happening.

What you saw Tuesday night wasn’t two parties bickering over the best way to solve a shared problem. No. In this case, one side’s problem is the other’s side’s solution.

And then there’s the emotional payoff of. Democrats feel good about letting in poor people from around the world. These are people who don’t make a lot of complicated demands about health care, dental or unfunded pensions or what their kids should be doing for a living. They’re not whiny, like Americans. They’re not living reminders of how politicians have failed to fulfill their promises. No. They’re just grateful to be here. They’re immigrants.

Democrats love people like that. In fact, they’ve come to love them much more than they love you. Rep. Alexandria Ocasio-Cortez, D-N.Y., said that out loud Tuesday night:

"The women and children on the border that are trying to seek refuge and seek opportunity in the United States of America with nothing but the shirt on their backs are acting more American than any person who seeks to keep them out ever will be," she said.

So, people who show up here and ignore our laws are more American than you are. That’s how Democrats feel. Keep that in mind as you watch this debate.