There was a brief moment – a small window – at the beginning of this week when it seemed possible that our media establishment might look inward and learn something useful about itself. Humiliation, as always, is the best teacher, and they were definitely humiliated.

In the space of just a few days, two separate high-profile news stories turned out to be utterly fraudulent. First, BuzzFeed announced that former Trump lawyer Michael Cohen had been coached to commit perjury by the president of the United States. The cable news caucus immediately erupted in glee — “Finally, we got him!” — until Robert Mueller’s office weighed in to point out that the story, thrilling as it sounded, wasn’t, strictly speaking, true. That was embarrassing.

Then, just 24 hours later, our entire ruling class united as one to crush a group of Catholic school boys from Kentucky, who had apparently behaved disrespectfully toward an American Indian man in Washington. A short video clip on social media appeared to tell that story. The only problem was, there were other, much longer videos of the same event, and they revealed a very different truth. The students from Covington Catholic didn’t harass anyone. In fact, they were the ones being harassed. Ouch.

Various media luminaries swiftly deleted their scolding tweets. Some even apologized for getting it wrong. Self-awareness made a rare appearance in the national press corps.

But the moment passed quickly. It’s always painful to concede your mistakes, especially the mistakes you make because you’ve allowed mindless stereotypes, rather than facts, to shape your understanding of the world. Nobody wants to do that. It’s much easier to blame others. Hence, the media did.

On Tuesday, the Washington Post ran a story that summed up the new consensus on the Covington students. Here it is: "A viral story spread. The mainstream media rushed to keep up. The Trump internet pounced."

Got it? The real villains here aren’t the journalists who pushed for innocent kids to be expelled from school and punched in the face. The real bad guys are the people who were offended by the fake story. They’re the ones who, quote, “pounced.” That’s what bad people do in Washington Post headlines. They pounce.

So, having absolved themselves of any wrongdoing, and having recast themselves as the real victims here, the media went back on the offensive against the Covington students. One of those students, a boy called Nick Sandmann, made the mistake of going on NBC. The "Today" show's Savannah Guthrie asked him the following questions:

"Do you feel from this experience that you owe anybody an apology? Do you see your own faults in any way?"

"Have you looked at that video and thought about how it felt from the other’s perspective? In other words, there were a lot of you, a handful of the others. Do you think they might have felt threatened by a bunch of young men kind of beating their chests?"

"Do you think if you weren’t wearing that hat, this might not have happened or it would have been different? ... There’s something aggressive about standing there, standing your ground."

“There’s something aggressive about standing there." Failing to move is a hostile act. We can’t have people standing still in public places. “Get a move on, son." That’s what NBC is telling us.

Just kidding. NBC is fine with people standing around, most people anyway. Go ahead and make the case for loitering laws and see what happens. NBC will attack you as a fascist before you finish the sentence. NBC just doesn’t think that people like Nick Sandmann should stand in place. It’s “aggressive.”

George Orwell imagined a world like this 70 years ago, in his book "1984." For the disfavored, Orwell wrote, "The smallest thing could give you away. A nervous tic, an unconscious look of anxiety, a habit of muttering to yourself. To wear an improper expression on your face was itself a punishable offense. There was even a word for it: facecrime."

This isn’t an argument about facts and evidence and truth. It’s an argument about identity. The Kentucky students are being attacked for who they are, not what they did or didn’t do. The sooner the rest of us understand that, the sooner we’ll understand what is at stake here. Everything is at stake, most specifically our ability, collectively, to live in peace in a multi-ethnic society.

Nick Sandmann committed facecrime last Friday. There was just something about his face, something aggressive and sneering. And for that crime, some of our superiors don’t believe that Nick Sandmann ought to be allowed to speak in public.

"There was this attempt to kind of give a fuller account of the young man," MSNBC pundit and Princeton professor Eddie Glaude explained. "And I think a lot of folks were asking the question, when — why do we always do this, in these sorts of cases, when white boys are involved? ... We give privilege to these white kids. He can sit down with Savannah Guthrie and redeem himself, but then there are all these other folks that we presume aren’t so innocent."

"Privilege." That’s the real problem here. Nick Sandmann has too much privilege. So says the tenured Princeton professor with the cable contract. That professor works nine months a year for a guaranteed salary that puts him in the top two percent of all wage earners in this country. His day job has so few demands that he can spend most days sitting around a TV studio wearing makeup. Yet, he is still the victim of Nick Sandmann’s privilege. The Ivy League professor has far less privilege than Nick Sandmann, who is a Catholic school student from one of the country’s poorest states. Way less privilege. Doesn’t even compare. That’s the case they’re making.

Let’s be honest. This entire conversation is not really related to what happened outside the Lincoln Memorial last Friday. The people who are angriest at Nick Sandmann and his classmates don’t actually care what happened. They don’t even know. They haven’t watched the video, and they don’t plan to.

This isn’t an argument about facts and evidence and truth. It’s an argument about identity. The Kentucky students are being attacked for who they are, not what they did or didn’t do. The sooner the rest of us understand that, the sooner we’ll understand what is at stake here. Everything is at stake, most specifically our ability, collectively, to live in peace in a multi-ethnic society. 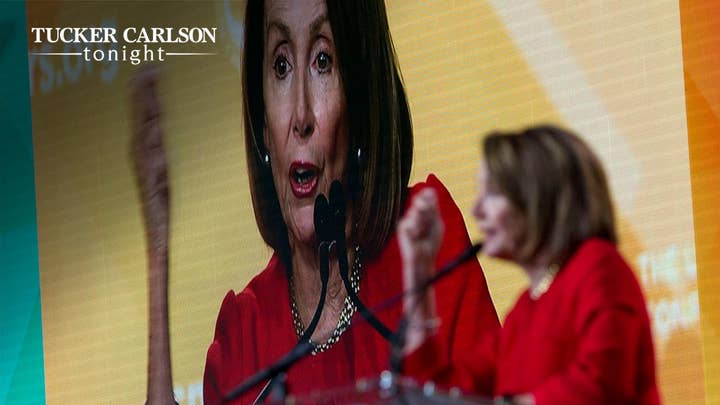 There is no longer an overwhelming majority group in this country. It’s a diverse country, as we’re often told. There’s nothing wrong with that. But it takes thoughtful leaders to pull it off. The presumption of equality is a prerequisite for diversity. Once people start believing that some groups are inherently inferior to other groups — “They have more privilege." "They shouldn’t stand still in public." "There’s something about their faces we don’t like." — When people start thinking that, the whole project falls apart. People start hating each other.

They’re not hating each other for their opinions. We could fix that. People’s views evolve over time. Political divisions can heal and often do. But fights over identity do not; they are different. Identity does not change. It can’t be moderated or controlled. It’s inherent. We’re born that way. When we go to war over who we are, it’s a permanent battle. It is a disaster that lasts for generations.

Identity politics will destroy this country faster than a foreign invasion. You should know that as you listen to them push it relentlessly, as they will obviously do.