Tucker: Joe Biden's 'holy war of liberation' is nothing new

You may have missed it, but Joe Biden devoted part of his very first day in office to addressing one of this nation's most pressing problems: Girls' sports.

The main problem with girls' sports, obviously, is that they lack diversity: Only girls get to play. That's wrong, and Joe Biden plans to fix it; to break the turf ceiling, if you will.

Now, for the first time in history, men will be allowed to compete in, for example, girls' field hockey, and then change in the girls' locker room afterward. Joe Biden has signed an executive order requiring it. Even Barack Obama didn't do that.

This makes Joe Biden a #civilrightshero. There's been a lot of talk recently about women's empowerment, but it takes a real leader, a once-in-a-generation moral visionary, to go further than that and use federal power to humiliate and endanger women on behalf of biological men. That is next-level feminism. That is real empowerment.

That's the Joe Biden program, and he's been planning it for years. This is what he said last February:

BIDEN: Well, no, the animating promise of this country, that all men and women are created equal, has never been fulfilled.

By "equal," Joe Biden means "identical". There are no differences between men and women, that's the position. Those gender categories we've heard about since the dawn of recorded history are fake. So there's no reason to protect women from men under any circumstances, because the whole idea of men and women isn't real.

Not everyone believes this, of course. Science isn't always popular (or the peasants don't understand it). There are still troglodytes out there in the year 2021 who are trying to keep men out of women's sports. Yes, Donald Trump is gone. But that doesn't mean hate has taken a holiday. 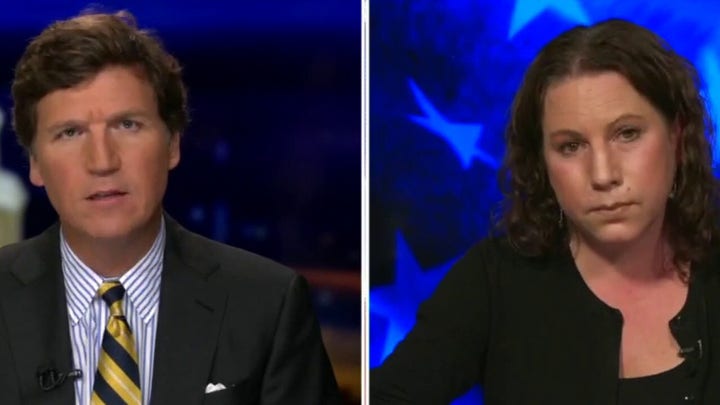 But Joe Biden is not intimidated by that. He doesn't care that pretty much no one in America agrees with him or even understands what he's talking about. When Joe Biden watches girls' gymnastics, as he frequently does, and doesn't see a single biological man walking the balance beam or swinging from the uneven bars, he doesn't just sit back and accept the status quo. He acts with force and certainty.

Now, activism like that may seem modern, but it's not new for Joe Biden. For 60 years, he has been fighting transphobia. Way back in the summer of 1962, decades before it was fashionable, Joe Biden confronted a vicious transphobe called Corn Pop, who wanted to keep men out of the girls' changing room at a public pool in Wilmington. It was a different time back then, but Joe Biden wouldn't have it. He threatened to beat Corn Pop with a six-foot chain, and that was just the beginning.

Decades later, Joe Biden flew all the way to South Africa to free Nelson Mandela from prison. Most of us assumed he was risking his life to fight the racist policies of the South African government. What we didn't know was that Joe Biden was actually fighting a more insidious foe, gender apartheid. Robben Island was men-only, segregated by sex, if you can imagine.

But the fight isn't over yet. Joe Biden's holy war of liberation continues. Even now, in this supposedly liberated time, groups of women still saunter to the ladies room together in restaurants across America with not a single man joining them in the stall. That happens, believe it or not. It happens right now. There are still sexually segregated public showers in this nation, not to mention dressing rooms in retail stores, that men aren't allowed to enter.  And what about your house? How many boys slept over at your seventh grade daughter's most recent slumber party?

We need to start asking ourselves questions like these. It's time to look within, America. Until we can all agree that eight-year-old boys can be strong, independent, sassy women, we're all part of the problem. Joe Biden understands that.

BIDEN: The idea that an eight-year-old child or a 10-year-old child decides, 'You know, I decided I want to be transgender. That's what I think I'd like to be. It'll make my life a lot easier. There should be zero discrimination.

Joe Biden has a solution. Sixty years ago, he fought Corn Pop with a chain to protect the right of biological men to be present when girls change into their bathing suits, and he'll bring that same moral clarity to your daughter's lacrosse team.

Leadership like that will change this country. In time, you won't hear people claiming to be the first female this or first female that because honestly, in a truly liberated society, who can say what's female? Why shouldn't Mike Pence announce that actually, he was the first woman to serve as vice president? Who could call him wrong?

Not us. We don't do hate speech here.

This article is adapted from Tucker Carlson's opening commentary on the Jan. 22, 2021 edition of "Tucker Carlson Tonight."