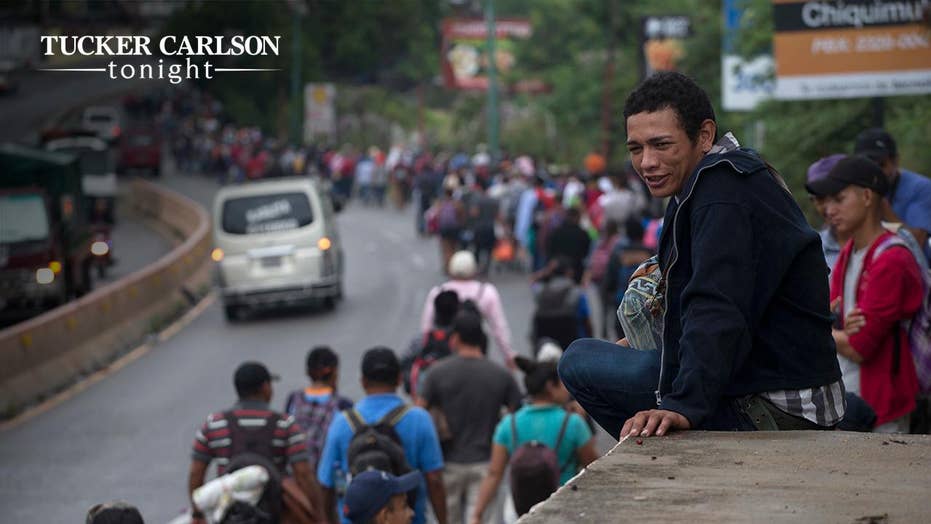 On Thursday, Tucker Carlson investigates the Democrats’ attacks against immigration reform as the U.S. and Mexico make an agreement to stop the immigrant caravan. Then later, Tucker questions Google’s refusal to aid in national defense. Plus: Antifa member verbally assaults a 9/11 widow.

A caravan of impoverished migrants is now making its way up from Central America through Mexico. Their plan is to present themselves at our Southern border and demand entry into our country with all the benefits, of course, that that entails.

The White House has vowed to stop this caravan using the armed forces, if necessary, but it keeps coming. Have you heard something like that before? Well, in fact, you have.

Something very similar happened just a few months ago. We watched another migrant caravan snake its way up from Central America. It finally arrived and then the news coverage essentially stopped. But what happened next? Well here's what happened next.

Hundreds of those people in that caravan are still here in the U.S. And if recent history is any guide at all, very few of them will ever leave. Once you reach this country and claim asylum, you're usually home free. Our media don't often cover that. But the rest of the world is watching and knows it very well. And that's why they keep coming.

The most recent estimates suggest that a caravan's worth of uninvited migrants arrives at our border every few days. Why is this happening? Because an entire political party is inviting it and encouraging it. They believe unchecked immigration will strengthen their hold on power. They're perfectly aware that you don't like this, but they don't care.

Just this week, Nancy Pelosi said it would be "Immoral" to build a wall that might stop poor people from flooding into this country.

"We have to do something other than building a wall, which you said very well. In my view, it's immoral, expensive, ineffective, and not something that people do between countries."

Did you catch that? Securing the border is just "Not something people do," not something decent people do, anyway. Bigots do it, so do moral reprobates and anyone else who derives pleasure from cruelty.

Democrats are morally outraged. Well, they're always morally outraged. And the point of their moral outrage is pretty clear. America has no right to decide who lives within its borders. Americans lack the moral standing to make that decision. We are too sinful.

Illegal immigrants come here because we deserve it. We meddled in their wars in the 1980s. We had the gall to get addicted to the drugs they send us. We once had segregation in the American South, whatever. The point is this is a fallen country. Twenty-two million illegals within our borders is just the beginning of our penance. Latin America is listening to all of this and they are getting the message, and that's why they're on their way.

Last fiscal year, 94,000 families from Honduras, Guatemala, and El Salvador were detained at the U.S. border. Not one of these people had a right to come in, but they were not deported. Almost 100 percent of them are still here and most will never leave. We are powerless in the face of this.

Congress could fix it but Congress refuses to fix it. The system is broken by design. Voters know this, of course. It's one of the main reasons they voted for Donald Trump two years ago. They don't hate immigrants, obviously, but they do believe America has a right to decide which immigrants to admit. All countries have that right, don't they?

That would be an interesting debate. The Democratic Party and their lackeys in the media don't want to have that debate because they know they would lose. So instead, they try to bully the population into silence. Here's a good example from this exchange on CNN:

In other words, shut up racist. You probably heard that before too like every day for the last two years. You hear it a lot because it's an effective political tactic. But it only works if you fall for it. You should not fall for it.

Most Americans are not racists, not even close. They're decent people. They love their country. They want their country to continue. And they know that will not continue without real borders.