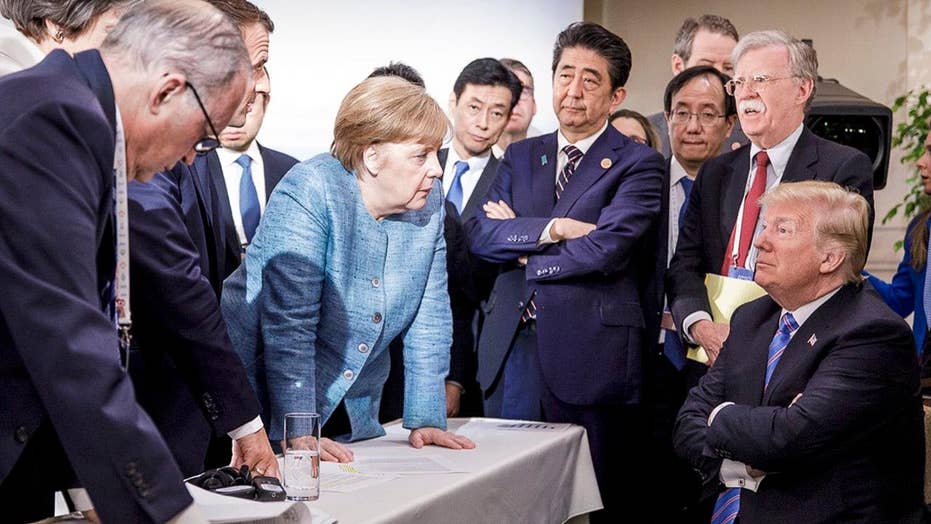 Media in meltdown mode over Trump's trip to G7 summit

Beverly Hallberg, president of the District Media Group, examines the overreactions by the press.

President Trump’s weekend trip to the summit of the Group of Seven industrial nations in Quebec and his upcoming summit Tuesday in Singapore with North Korean dictator Kim Jong Un are good illustrations of his determination to bring about peace through strength and fair trade practices in relations with other countries.

But the president sees the two different set of skills as interconnected. The more trade the U.S. carries out with other nations, the greater the chances to find an alternative to military action. However a refusal by nations to remove direct threats to our interests will get a response comprised of the full might and fury of U.S. power.

President Trump’s trip to the G7 summit highlights free economic activity as the greatest way to improve the human condition, but with the caveat that all parties must operate fairly for this to work. The president also sees that many countries and companies take unfair advantage of the United States and he is willing to fight to create a level playing field.

This was in play with the war of words over trade in the run-up to the G7 summit. The feuding continued during the summit and afterward, when President Trump threatened Saturday night to place tariffs on foreign cars imported into the United States.

This brings us to the biggest wild card President Trump brings to the world stage: he is a change agent. It would even be fair to say he creates chaos and misdirection – and then looks for an advantage. This drives many of his critics to distraction.

President Trump also told reporters that he would no longer accept “ridiculous and unacceptable” tariffs imposed by other nations on good imported from the U.S. and threatened to “stop trading” with nations that would not lower their tariffs.

“We’re like the piggy bank that everybody’s robbing – and that ends,” President Trump said.

After Canadian Prime Minister Justin Trudeau used a summit news conference to criticize tariffs President Trump placed on steel and aluminum imports from Canada, Mexico and the European Union, President Trump refused to support a joint statement with other G7 nations (Canada, Britain, France, Japan, Italy and Germany) at the summit in Canada.

The U.S. president tweeted from Air Force One – as he headed to his Singapore summit – that Trudeau is “Very dishonest & weak” and wrote that the Canadian prime minister had made “false statements.”

On the topic of his summit with Kim Jong Un in Singapore, President Trump said he will walk away if there is no good deal to be made over North Korean nuclear weapons.

The president said he will use the summit to size up Kim’s willingness to denuclearize and that “I think within the first minute I’ll know” if something good will come out of the summit.

President Trump has made clear that he is not seeking to overthrow Kim or his communist regime. The president understands that absent a clear and present threat to U.S. security, it is not generally wise for America to be involved in regime change in other countries.

The president also understands that we can and should encourage countries run by dangerous, oppressive and corrupt leaders to work to give their people more freedom. Both President Trump and Secretary of State Mike Pompeo have done this. For example, they spoke directly to the people of Iran about the mistreatment they have suffered under the mullahs who rule the nation.

President Trump has shown he will assert the power of the United States when it is in our national interests to do so. But he will not seek out foreign adventures to spread American style democracy around the world. However, America can and should retain our role as the shining city on a hill for the world to emulate. There is still no other country even close to our level of progress in freedom, prosperity and individual liberty.

One welcome aspect of President Trump’s leadership style is his belief we should reward our friends and punish our enemies. This has been somewhat lacking and even backwards in recent administrations, as in the Obama administration’s treatment of Iran as a partner for peace and Israel as the problem in the Middle East.

This brings us to the biggest wild card President Trump brings to the world stage: he is a change agent. It would even be fair to say he creates chaos and misdirection – and then looks for an advantage. This drives many of his critics to distraction and even his supporters and allies are often hard-pressed to handle it.

But when you are dealing with longstanding problems and well-entrenched interests, metaphorically knocking over a few apple carts or a conference table or two can break that deadlock.

Having a strategy to pursue those openings is essential and the Trump administration does, as its stellar National Security Strategy that came out early in the Trump presidency shows.

The strategy lays out an America First version of the peace through strength doctrine that served us so well in the Reagan years. The current negotiations with Kim Jong Un are a perfect example of this in action. Tough words from President Trump about his unwillingness to accept an aggressive and nuclear-armed North Korea changed the dynamic and now denuclearization is an actual possibility.

Peace through strength and fair trade are an excellent one-two punch and they work well together. Play nice and we can be friends in a mutually beneficial way economically. Aspire to self-determination and we will support you. Act against U.S. national interests and you will see the other side of the coin. The Trump administration has a plan and it is working successfully around the world.