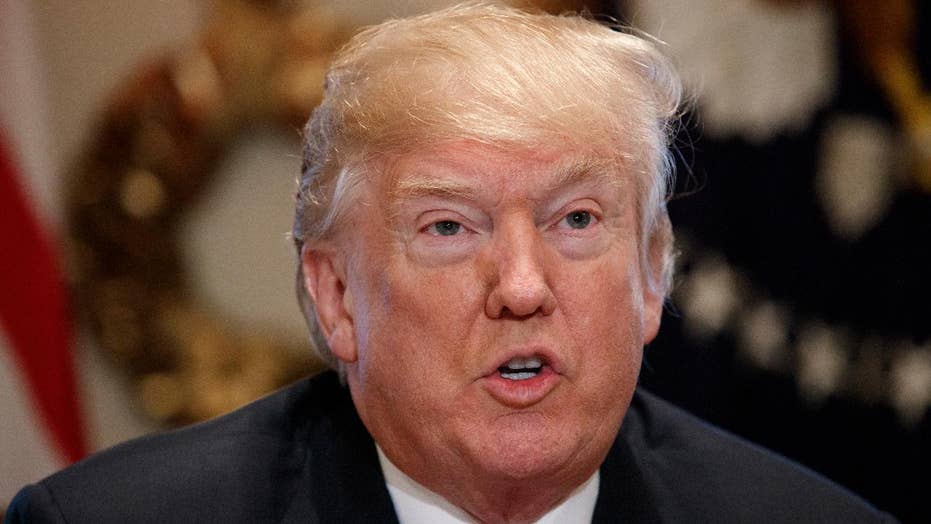 Blake Burman has the reaction from the White House.

Historic tax cut legislation that President Trump signed into law Friday will give us the chance to see what happens when an entire nation of 326 million people discards the failed policies of big government and managed stagnation, and instead rewards hard work and innovation.

Within hours of final passage of the Tax Cuts and Jobs Act in Congress this week, companies all across America announced billions of dollars in new investments, pay increases, employee bonuses and plans to hire new workers.

And with a reduced business tax rate – along with provisions that incentivize companies to bring home an estimated $2 trillion in earnings stashed overseas – the good economic news should continue well into 2018.

The fundamental premise of the coming economic boom is simple: millions of free individuals are better able to work, save, invest and create when the burden of government is lifted from their shoulders.

The fundamental premise of the coming economic boom is simple: millions of free individuals are better able to work, save, invest and create when the burden of government is lifted from their shoulders. Heavy taxes and capricious and harmful regulations enacted by unelected and unaccountable bureaucrats are a weight on the economy that hurts business expansion, job creation and wage growth.

The massive amount of red tape produced by regulation upon regulation costs our nation’s economy a staggering amount – $1.9 trillion a year. That’s about 10 percent of the U.S. economy. Put another way, the regulatory burden is about the same as the total amount of money collected each year in federal income taxes.

So far, federal agencies under the Trump administration have imposed only three new regulatory actions, while issuing 67 deregulatory actions. That’s progress on a historic scale and it’s received too little attention.

In addition, the Trump administration has withdrawn or delayed 1,579 planned federal regulatory actions. This will save Americans $570 million per year. It stands in stark contrast to federal red tape costs of up to $15.2 billion year imposed by the Obama administration in just its final eight months.

The Declaration of Independence sets out government’s highest purpose in America: to secure unalienable rights –“Life, Liberty, and the Pursuit of Happiness.” At its best, government allows us to live in freedom and peace.

But too much government, as Alexis de Tocqueville warned in the 1830s writing in “Democracy in America,” can reduce citizens to “…nothing better than a flock of timid and industrious animals, of which the government is the shepherd.” Tocqueville called this threat to freedom “soft despotism.”

Americans know how to use freedom and are attracted to places where freedom is high and opportunity allows us to flourish. That’s why people vote with their feet to escape high taxes and regulatory burdens in some states and move to other states.

For example, the U.S. Census Bureau’s new population estimates show that among the half-dozen most-populous states, Texas and Florida grew at more than double the national average from 2014 to 2017.

California, Pennsylvania and New York grew less than the national average. Illinois – former President Obama’s home state – managed to lose population, shrinking by more than 80,000 people, many of them moving to Texas.

Under the new tax cuts and Trump administration deregulatory actions, our nation will become more like Texas and Florida and less like the slow-growth states. The American spirit of creativity and hard work will be unchained and help to – if I may borrow a phrase – Make America Great Again.

Large government with powerful and highly educated unelected elites calling the shots is sometimes described as the “administrative state.” The administrative state is at odds with the U.S. Constitution, which established a representative democracy with checks and balances to prevent a concentration of power that could erode liberty.

The administrative state’s strength can be measured by looking at: overall federal spending as a share of the economy; the number of federal regulators and the thousands of pages in the rule books they administer; and key tax rates.

Together, these factors provide a useful gauge of the federal government’s power – call it the Soft Tyranny Index.

The steady growth in federal power during the course of our nation’s history has been reversed only four times in the past 57 years. This happened after:

• The red tape reductions and tax cuts enacted during President Reagan’s two terms in the 1980s.

• The years following the Republican takeover of Congress in 1994 when President Clinton famously declared that “the era of big government is over.”

Assigning a numeric value to tax rates, the number of regulations and regulators and federal spending shows that as a result of the tax cuts signed into law Friday by President Trump, he is on track to lead a reduction in the Soft Tyranny Index as significant in his first term as that accomplished by President Reagan in his entire two terms in office.

As a result of paring back federal taxes and regulations, Americans will enjoy several years of strong job and wage growth. For anyone under 40, that’s likely something they’ve only heard about from their parents or learned about in school.