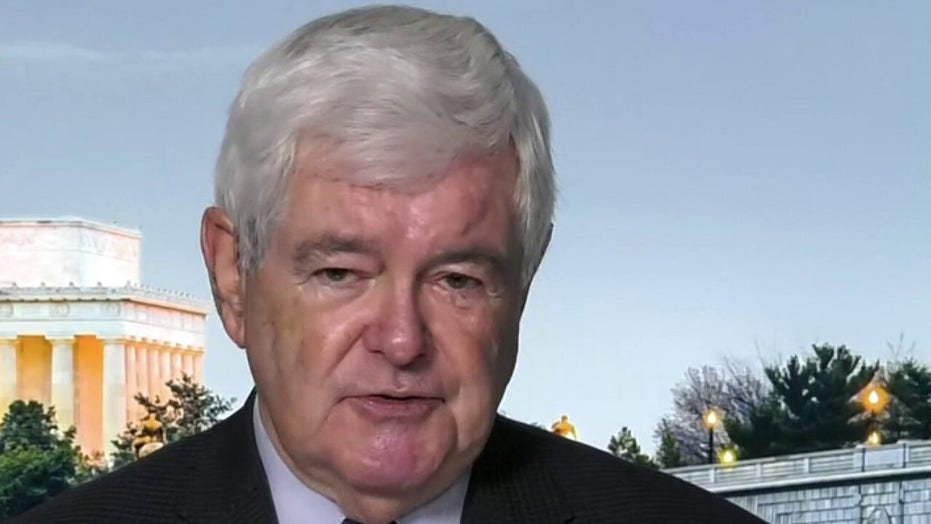 Newt Gingrich lays out what Trump's final campaign message should be

Former House Speaker Newt Gingrich stresses that President Trump should focus on the economy, the 'corruption of the Biden family' and winning the argument that the U.S. response to COVID-19 'has worked.'

In 1964, Republican presidential candidate Barry Goldwater asked Ronald Reagan to deliver a nationally televised speech on behalf of his campaign. The speech was called “A Time for Choosing.”

In his address, Reagan made the point that freedom was at stake — that we’re always taking a step toward either more freedom or more tyranny. Reagan noted that, for several thousand years, man had gradually worked to create the rule of law; to establish the right of a free people who insist their liberties come from God, not government; and to limit the power of those who would exploit us, bully us, and dominate us.

In 2020, we have seen the re-emergence of tyranny in America to a degree that I would have thought impossible were I not living through it.

Across the country, Democratic leaders and their allies have trampled rights, censored speech, and hidden the truth from the American people.

Americans have a choice on Election Day to continue further down this tyrannical path or step back from the brink and recapture our God-given freedoms. I discuss this choice — the stakes of the election — on this week’s episode of my podcast, “Newt’s World.”

Most egregiously, Democratic governors have abused their power during the coronavirus pandemic, discarding the Constitution to impose arbitrary bans that crush our liberty.

In Nevada, for example, Democratic Gov. Steve Sisolak reopened casinos with few restrictions but severely limited the number of people who could go to church.

In New York, Democratic Gov. Andrew Cuomo targeted New York City’s Orthodox Jews in what can only be described as an anti-Semitic attack.

In Michigan, Democratic Gov. Gretchen Whitmer banned people from using their boats — although her husband thought he was the sole exception.

And then of course there’s the elite media, which has become a collection of propaganda outfits dedicated to protecting Joe Biden and other Democrats — even from confirmed reports of corrupt business dealings. Imagine if Bob Woodward and Carl Bernstein were told in 1972 not to pursue the Watergate scandal — after all, what’s a little corruption among friends? That’s what the media is doing today.

In short, what we’re witnessing is an undermining of the United States of America — not just by the above forces but also by Black Lives Matter rioters and Antifa anarchists.

NEWT GINGRICH: A 2020 ELECTION FABLE -- THE BUNNY RABBIT, THE BEAR, AND THE BEES

In this environment, the 2020 election is occurring at one of the most amazing and consequential times in modern history. Indeed, this election is the most important one since 1864, when America would have died if Abraham Lincoln were not re-elected.

A victory for Donald Trump would be an American populous uprising against all the large systems that would sell out to the Chinese, give up the American dream, and suppress the political right.

But will President Trump be re-elected? I think so. If you examine the crowds at the president’s rallies, you’ll find not only a significant number of people who have never before voted but also many Democrats. Plus, in virtually every state-wide poll, we see Trump at a minimum doubling his share of the African American vote.

Furthermore, we’re discovering that a number of people may not like Trump but are totally unimpressed with Biden.

Voters have to ask themselves whether they really trust a man who hides in his basement and a San Francisco radical running the country — especially when we’ve seen President Trump oversee a historically strong economy and not get involved in any more wars.

Perhaps most importantly, recall that on Election Day in 2016, Nate Silver and the New York Times said Hillary Clinton had an 85 percent chance of winning. Look what happened next.

But we can’t assume that history will repeat itself, although I expect it to. All Americans who care about the future of their country must go out and vote and urge their friends and family to do the same.

I hope you will listen to this week’s episode to hear what’s truly at stake on Election Day.

I also hope you will listen to my next episode, set to air Wednesday, when I will react to the results of the election and give my thoughts on what to expect going forward.