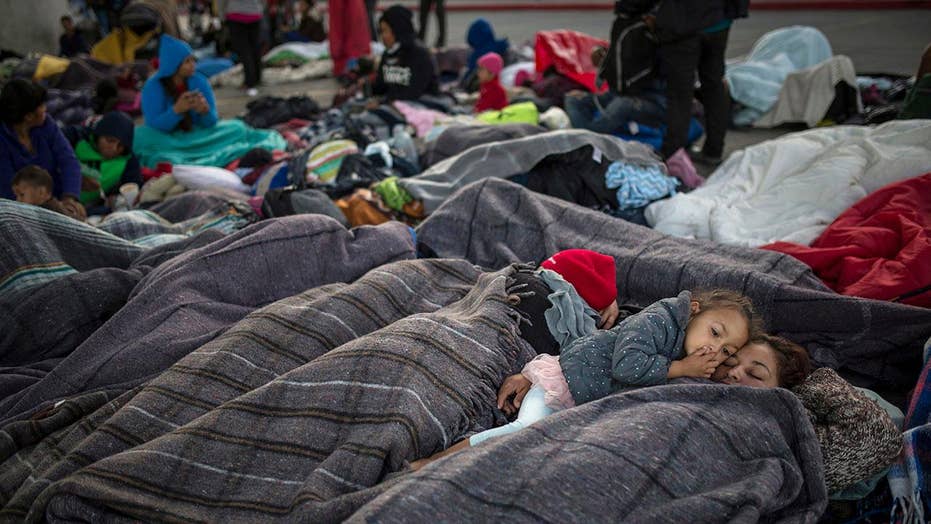 Tijuana asks the world for help as thousands of migrants crowd the border town; panel reaction on 'The Ingraham Angle.'

President Trump was right to order troops to our border with Mexico to reinforce our overworked law enforcement officials and protect our sovereignty.

For nearly 100 years, the U.S. Border Patrol has defended our boundary with Mexico against terrorism, drug trafficking and illegal immigration – three serious threats to U.S. security.

The U.S. military and the Border Patrol have a history of working closely together.

In 1989, President George H.W. Bush deployed U.S. military forces to the border to work in concert with the Border Patrol to strengthen our defenses against increasingly problematic infiltrators. This organization was named Task Force 6, now Task Force North, and has continuously provided the U.S. Border Patrol with intelligence, support and necessary shows of force.

Those who believe the president’s deployment of troops to the border was a political stunt ignore this history – and ignore the fact that both Republican and Democratic presidents have presided over U.S. military operations along the border.

The reality is that every president and presidential candidate has promised to do something about illegal immigration and border security.

Why does President Trump now receive criticism for securing our borders? Three reasons:

First, whatever President Trump does, the left reflexively supports the opposing position.

For example, when the president canceled the Iran nuclear deal, the left supported the Iranian mullahs who crack down on innocent protesters.

When President Trump moved the U.S. Embassy in Israel from Tel Aviv to Jerusalem, the left supported Hamas terrorists who attacked Israel.

And when the president called out illegal immigration, the left supported MS-13 gang members, who kill and rape U.S. citizens.

Now, instead of supporting our Border Patrol and military, the left is supporting illegal immigration – along with drugs, crime and terrorists that invariably flow with that tide.

Second, the progressive left no longer sees America as the beacon of hope for the rest of the world.

Instead of embracing nationalism and patriotism, leftist progressives are bent on highlighting our divisions – whether they be race, sex, religion, or any number of characteristics, as long as they can be used to sow division.

This vision is designed to weaken America and undermine our identity to the point that Americans can no longer remember what we were. Why? Because most leftists have never been proud of our country, and driving wedges further weakens unity.

Troop deployments are just another sign of positive action, as opposed to the political rhetoric most politicians rely upon.

Remember the “fundamental change” Obama promised? That change was the dismantling of American ideals.

The left’s plaintive wail today is not only the echoing sound of protesters kneeling in the streets and screaming on November 9, 2016 – the day after President Trump was elected; it is also the sound of the aircraft carrier turning on a dime.

Through resolute action, such as reinforcing our border, President Trump is undoing President Obama’s eight-year drive to dismantle American ideals.

The reality is that every president and presidential candidate has promised to do something about illegal immigration and border security.

Whether it is Senate Minority Leader Chuck Schumer, D-N.Y.; Democratic presidential candidate Hillary Clinton; or President Obama – all have all espoused the same calls as President Trump to secure our borders.

Just as he did by fulfilling his promised to move the U.S. embassy in Israel to Jerusalem, President Trump is delivering on his promise to secure America’s borders. This is the difference between filling speeches with empty platitudes to get elected and meaningful action to keep a campaign promise.

President Trump’s use of troops on the border is the right move. No amount of leftist protestations should distract us from the fact that the primary purpose of our military is to provide security to America.

And that’s exactly what the men and women in our military are doing.