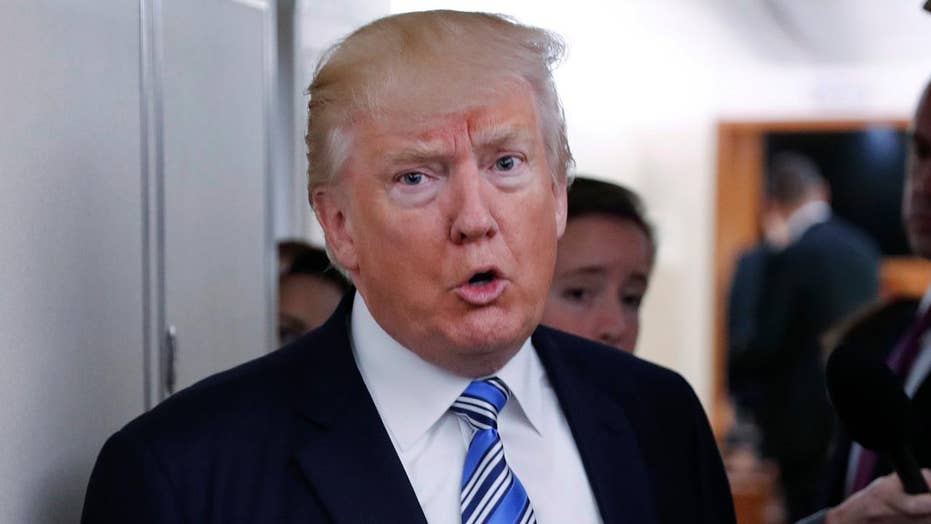 The White House is attempting to turn to the focus from the intelligence to the fact that it leaked; John Roberts has the roundup on 'Special Report'

We should have seen it coming. You don’t threaten to Drain the Swamp! without awakening some pretty surly bottom feeders. It is clear that the political establishment simply hates President Trump. That goes for Republicans almost as much as Democrats.

From Day One various pols on the right have been quick to jump on the anti-Trump bandwagon. Cheerleader of the group: John McCain, who was nastily demeaned by candidate Trump and who has since leapt to the opposite side in every single controversy, getting his own back. Other defectors include Marco Rubio, Lindsay Graham, Rand Paul, John Kasich… wait – notice any connective tissue here? Right – all of them ran against Trump and were demolished with varying levels of ugliness. The only reason Ted Cruz isn’t on the list is that the ever-calculating Texas Senator figures that by being the last guy in Trump’s corner, he may inherit his leftover supporters when The Outsider President walks off into the night. Or whatever.

For lots of Trump backers, absolutely every single thing he has done since occupying the Oval Office is understandable. Those millions who voted for him never expected or wanted him to behave like any other candidate, or president. He was expected to break some glass, and turn convention on its head. That was his appeal.

They knew he’d make mistakes. Polling shows they really don’t care when he does.

The Washington Post is appalled that he spoke to the head of Taiwan, describing the outreach as an “intentionally provocative move.”

Big deal, say his backers. Absolutely none of his voters care about his tax returns; they’re delighted he might even be able to hold off the feds and they wish they could, too.

As for the Russia story, they’re not buying it. Did a Trump campaign apparatchik conspire with the Russians to hack the DNC and spill damaging (but real) information about Hillary Clinton? Good for them, they say. After all, Hillary has only herself to blame for using a secret server and for conspiring with party officials to cheat Bernie Sanders. Everyone knew she was a crook; the Podesta email dumps just confirmed it.

As for firing James Comey, right-wing supporters of President Trump never trusted the ex-FBI head; they blame him for the fact that Hillary Clinton is still “at large.”

What about the newest breaking news: Comey says Trump pushed him to drop the inquiry into Michael Flynn’s talks with the Russian ambassador? The real story for millions of Americans is that someone illegally “unmasked” Flynn. Anyway, they figure Comey is just sore he was fired. After all, if Trump really asked him to obstruct justice, the noble Comey would have resigned, right?

As to Trump – he fired Flynn. In his mind, that was the end of it. Can’t we imagine him slapping Comey on the back and saying – why not give it a rest?

And then there’s the story about Trump leaking classified information obtained from Israel to the Russians. Israel doesn’t seem upset; McMasters claims it was no big deal. Why the uproar? Is it any worse than Hillary sending classified information to Anthony Weiner? Call me crazy, but I’d rather count on the Russians to treat sensitive information wisely than the pervert ex-Congressman. Talk about a potential blackmail target!

Donald Trump is not only fighting off the political establishment, he’s also fending off unprecedented onslaughts from the media. Every utterance is ridiculed, every action critiqued. If he manages, on his upcoming trip to the Middle East, to broker the beginnings of a peace accord, he will be accused of costing PLO terrorists their livlihood. Or something.

New York Times publisher Arthur Sulzberger Jr, sent an email to readers who cancelled their subscriptions defending the paper’s decision to hire a conservative columnist, Bret Stephens. In a recent column, Stephens says Trump’s “views are often malevolent, and his conduct might ultimately prove criminal. But we, too, are protected, for a time, by the enormity of his stupidity.” That’s the Times’ choice for a conservative voice.

People loathe and distrust the media, so its concerted attack on Trump does not bother his supporters. The intelligence community is another story. The constant leaks from the White House and the surveillance of the Trump campaign team is worrisome.

After all, James Clapper, former NSA chief under Obama, told Congress his agency was not spying on Americans. It was a bald-faced lie, but he was never dismissed; indeed, he is one of the most vocal intel opponents lined up against President Trump. He is the person out there denying that Obama wiretapped the Trump camp. Why on earth is he credible?

It’s frightening. The intelligence community has enormous power. The chattering classes are full of dire talk about “constitutional crises” and Trump’s casual disregard of national security, but it’s rogue intel operators, spying for political purposes and leaking damaging information about the president, that should concern us all.

Where do we go from here? My guess: there’s a good chance that the incessant undermining of the Oval Office might drive the president to resign within a year.

As he has pointed out more than once, he had a good life before running for office; he doesn’t need this.

That will be a tragedy for the nation, because the Trump agenda can actually help American workers, rebuild our competitiveness and boost growth. Moreover, if the establishment can run Trump out of town, it will prove for once and all how deep that dark swamp really is.