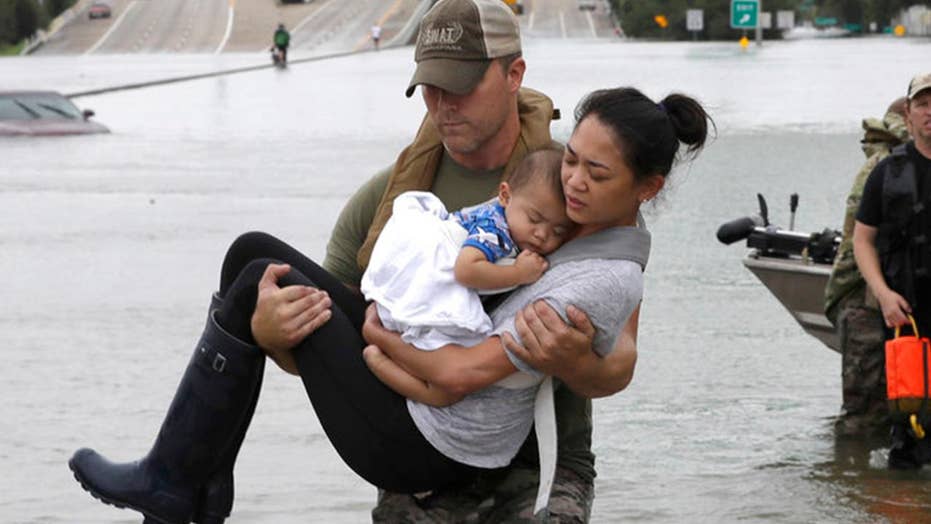 In the wake of Hurricane Harvey’s destruction, ordinary Americans throughout Texas are pulling together to help with rescues, shelter, food and support. Here are some examples of the heroism

Regardless of background, ethnicity, religion or political affiliation, everyone in the country can agree on one thing: We are a country divided.

These days it feels that every topic of political conversation leads to a heated argument, with personal attacks and low blows. And we are tired of it. Fighting doesn’t solve anything.  It just leads to more fighting. Only by coming together, working through our differences, and focusing on ideas instead of insults, can we form the more perfect union we know the United States can be.

It may seem impossible to do this, but we know for a fact that it is not. After all, if I, Harlan Hill, a staunch supporter of President Donald Trump, and I, Danielle McLaughlin, a liberal political commentator, can write a column together, certainly the multitude of groups within our country can attempt to have a calm, progressive, and constructive conversation about how to collectively address the most pressing issues of the day.

Our unity for this column, and our renewed commitment to civil discourse, was inspired by the Day of Jewish Unity on Sept. 15. The Jewish organization Acheinu (a division of the educational organization Dirshu) is encouraging Jews around the world to come together on that day to pray for peace and to pledge to refrain from divisive, pointless, or harmful speech.

The Jewish world is an apt metaphor in many ways for our country: There are various groups and subgroups who have different beliefs and agendas and who often are at odds with one another. And yet, these groups are able to put aside their disagreements to come together in peace and prayer. We knew we could too.

We both believe that the United States is the greatest country on Earth. The City on a Hill of de Tocqueville, echoed by Reagan and Kennedy.  A place of opportunity, strong in its diversity, and assured in its freedoms. Why else would so many people be trying to immigrate here?

Now, we may disagree on immigration reform. One of us may want to build a wall and the other might not, but we can at least agree that we have to formulate new, bipartisan solutions for border security and immigration.

Better policy and more robust -- and just -- laws will never come to pass if we are unable to hold a civil conversation. This does not mean we cannot disagree with one another, even passionately.  It means that we must commit to disagreeing with open ears, open hearts, with critical thought, and with words that inform rather than insult.

Through civil discourse and a pledge to work towards common goals rather than tear each other apart, we can begin the important work of improving our communities and our country, together. These common goals include economic growth, beneficial trade, fighting terrorism, standing up to nation states that seek to undermine the international order, ensuring a working social safety net and a health care system that enables quality coverage at low cost, protecting our national security, and encouraging the entrepreneurial spirit that burns brighter in America than anywhere else in the world.

We have always been strongest as a country when we stand together. We face existential and economic threats from Russian aggression in Europe, the balance of power and security in Asia, and the terrorism of ISIS, to name just a few. When we show a weak façade and a disunited front, we invite those who would wish us harm to exploit those divisions.

For these reasons, though we are not Jewish, we will be participating in the Day of Jewish Unity. Similarly, we ask you to engage in a positive and civil conversation with someone from across the aisle. Just try it; you may be surprised at how much you have in common.

No progress towards unity can be made without words of unity.  We commend Acheinu for organizing this global movement and for providing us an opportunity to recommit to better, more productive dialog.  We hope you will too.

Danielle McLaughlin is an attorney, political commentator, author, and columnist based in New York City.