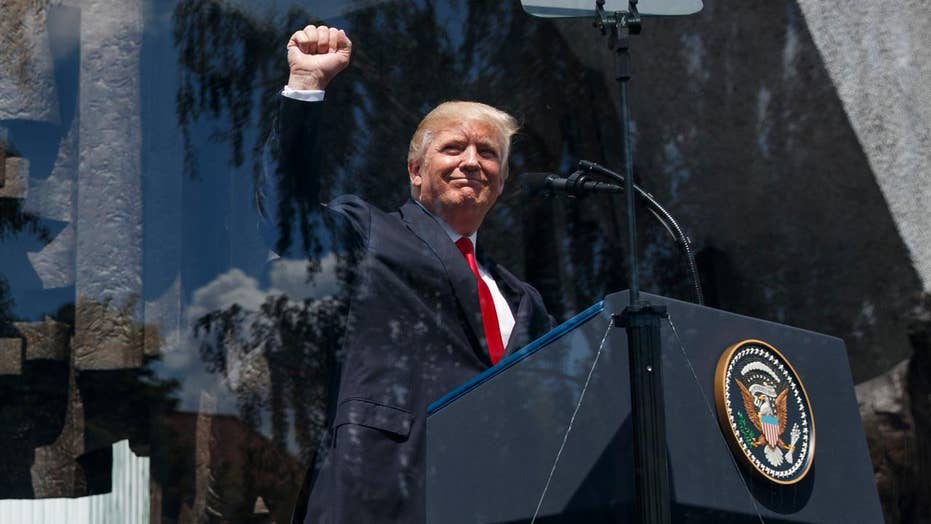 Ronald Reagan is nodding.  If anyone doubted President Trump’s grasp of history, doubt no more.   Today, on the site of the Warsaw Uprising, in the heart of democratic Poland, President Trump gave the most powerful speech of his presidency.

In an echo of Reagan’s “tear down this wall” speech given 30 years ago last month, President Trump declared Poland’s defense of freedom and Western values an enduring “symbol of hope.”  He honored the Polish people, their character and their patriots in a time of shared threats.

Then, he did more.  As Reagan challenged the Soviet communist ideology, predicting it would end on the “ash heap of history,” Trump extended his Middle East call to unity.  He declared “radical Islamic terror” an “oppressive ideology” doomed by its own inherent evil and “violence against innocents.”

President Trump traced Poland’s recurring defense of liberty, its own and ours.  He reflected on Polish heroes, like Tadeusz Kosciuszko, who fought in the American Revolution, beside George Washington.

He chronicled Poland’s unbowed faith, perseverance, and reverence for liberty that kept them unified as borders were erased and redrawn in successive wars.

He spoke with passion about the Warsaw Uprising, Nazi and Soviet inhumanities, faith in family, and devotion to universal values.  He spoke of the quest for truth and giving one’s life for something higher.

Of Polish and American patriots, he said:  “We can still hear their voices; they echo down through history.”

President Trump focused on what Ronald Reagan did 30 years ago: the human spirit, and how a free and faithful people will never to be broken – by anything.

Poland had showed us all how to stand “in solidarity against oppression,” he said, from Jewish resistance in Warsaw to Pope John Paul II’s and Lech Walesa’s fight against the Soviets.

Lech Walesa was in the audience.  My mind flashed back to 1982 and 1983.  In those years, I visited Soviet-dominated Poland, then under martial law.  I was a student then, studying Solidarity – the independent labor union turned opposition party.

The Trump speech was like a flashback.  He referenced the Poles putting sandbags up each night to protect Jerusalem Avenue under Nazi siege, removing them by day. It put me in mind of Gdansk, 1983, where homes were raided and people dragged away.  In Gdansk, Poles put bunches of flowers under a giant cross beside the shipyards – in protest.  Every day, the flowers were removed.  Every night, they returned.

Another flashback.  As the president spoke of shared values, shared threats and shared sacrifice, chants erupted.

Thousands of Poles chanted “USA, USA, USA” - chants of gratitude and for a shared commitment to faith, freedom and democracy.

These chants were rooted in history, from Kosciuszko’s gift to our revolution, through our shared sacrifices in two World Wars and in ending Soviet domination, to Afghanistan and Iraq to now.

It took me back to a day in 1983 when thousands of Poles chanted as they marched from Lech Walesa’s church to the cross at the Gdansk shipyards.

I asked a Polish friend, “What are they saying?”  She looked at me, and smiled.  She said, “Reagan will show you.’”  He did.

Trump is onto something, his foreign policy more consistent by the week, and I suspect Reagan is nodding.