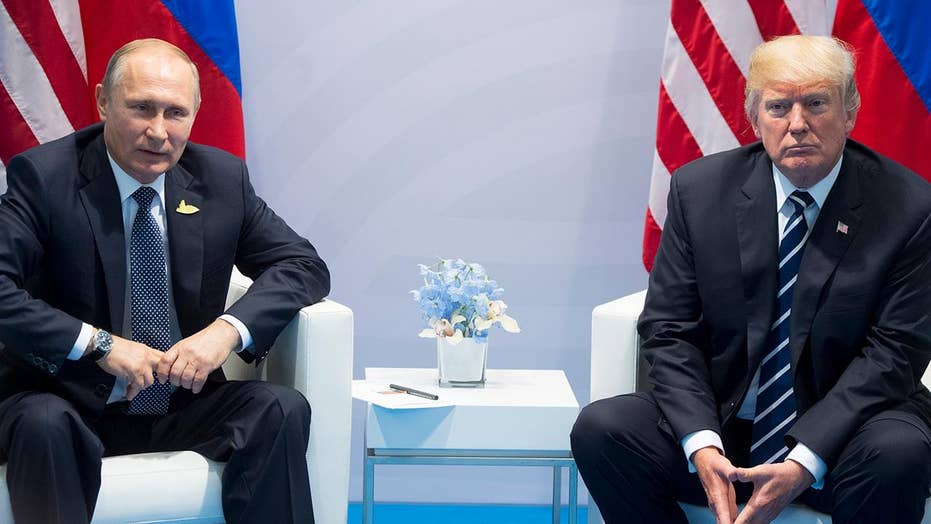 Expectations and objections for the Trump-Putin summit

Insight from Jonathan Swan, who covers the White House for Axios, and Michael Gordon, national security correspondent for the Wall Street Journal.

Heading into his summit in Finland Monday with Russian President Vladimir Putin, President Trump has an important goal: improve relations with the world’s second-ranked nuclear power – but only if doing so will benefit the United States.

“Getting along with Russia would be a good thing, not a bad thing,” the U.S. president said in April – a sentiment he has voiced many times before and since, going back to his days as a presidential candidate.

President Trump – despite what his critics say – is not a naïve fool who will sell out the United States and our allies and make ridiculous concessions to Putin. And he understands that improving relations with Russia and changing Russian behavior is no easy task. But he also believes it’s worth a try.

The plain truth is that Russia is too big and too important a nation for any U.S. president to simply refuse to deal with. And because of that, it’s to our mutual benefit for America and Russia to no longer be enemies.

Sure, our interests don’t overlap enough to consider a wide-ranging partnership or an alliance. But we can work together on some things, even if we will inevitably be opposed on others.

The truth is, the bitter distrust and hatred shared by many in Moscow and Washington today should have ended with the Cold War. But unfortunately, this didn’t happen. Russia and America now find themselves trying to repair the most broken of relationships.

I can’t help but wonder if this might have all been avoided. History tells us there could have been a different path, especially for Russia, if a fundamental question was answered once and for all: what is Russia’s place in the world?

Right now we seem destined to repeat a dangerous cycle of U.S.-Russia tensions reminiscent of the darkest days of the Cold War.

Does Russia belong in the West, thanks to a shared cultural and religious foundation, joining institutions like the European Union or even NATO?

Or is Russia so unique that it is a civilization separate from the West, thanks to its large territory straddling Europe and Asia? Does that mean Russia and the West will be locked in a clash of civilizations for all time?

Having grown up in the early 1990s, I was one of many Americans who cheered for Russia to join the West – hoping to see an end to decades of strife with America and its allies, and a real conclusion to the Cold War.

This might even be what President Trump himself refers to when he talks about wanting a better relationship with Moscow. He surely remembers a time where the future seemed bright and it looked like West and East might no longer be divided.

It may sound foolish today to hope for good relations between the U.S. and Russia. But history tells us that the most bitter of enemies can become allies in a fairly short amount of time. Our friends and foes change with the years.

Look back to World War II – just a blink of the eye in the timeline of history. Germany, Italy and Japan were America’s mortal enemies – and the Soviet Union was our ally.

No one knows the exact number of people who died in that horrible conflict, but estimates are that over 60 million people lost their lives. Yet today, German, Italy and Japan are our allies – while Russia is our adversary.

And right now we seem destined to repeat a dangerous cycle of U.S.-Russia tensions reminiscent of the darkest days of the Cold War.

As he works to improve relations with Russia – cautiously, pragmatically and with his eyes wide open – President Trump should keep five important truths in mind heading into his summit with President Putin.

First, the Cold War never really ended – there was just a brief intermission.

A rogue Russia seems ready to confront the West at every turn. From invading parts of its old empire twice, to rebuilding its military might over the last decade, to attacking the foundations of our democracy through cyberwarfare, Moscow has made it clear: it will pursue its interests with great vigor – and isn’t afraid to take on America.

Second, the breakup of the Soviet Union was the geopolitical event of the last 50 years.

The Soviet flag stopped flying over the Kremlin on Christmas Day, 1991. That was a historic Christmas present to our nation – the ultimate victory for us and our allies.

We should recall how the left cheered when President Obama tried to reset U.S.-Russia ties. They should, at the very least, give President Trump the space to see what is possible.

But the breakup still leaves the most bitter of tastes in most Russians mouths. Think how most Americans would feel if our nation suddenly broke up into 15 separate countries, as the Soviet Union did. How could this be anything but a traumatic experience?

One of the most powerful empires of all time died overnight, leaving Russia economically broken and beaten – a nation that experienced one of the most rapid collapses in all of human history.

There is a bitterness in the hearts of many of Russia’s leaders, including Putin. A quest to reclaim past glory is clearly on his mind. And history tells us that can be a very dangerous thing indeed.

Third, no matter what those on the left say, America is clearly in a commanding position in any confrontation with Russia.

Russia is in a state of relative decline that won’t be easy to halt. Its economy is a tinderbox, thanks to Western economic sanctions, poor planning, and oligarchs who are more inclined to fill their own pockets than turn Russia into the economic powerhouse it should be.

As Sen. John McCain, R-Ariz., pointed out some years ago, Russia is more of a giant gas station than anything else, with no global brands or truly innovative products to sell or showcase.

With declining demographics and real questions over who will succeed Putin when he leaves office, Russia is clearly a troubled state – and no match for a resurgent America.

Fourth, despite a history of rocky relations with the U.S. going back to the Russian Revolution in 1917, there are areas of shared interest for our two nations to build on.

For example, both nations should work to end conflicts in Syria and Ukraine, which have been the cause of recent tensions in the U.S.-Russia relationship.

Moscow and Washington also have clear reasons to extend the New Strategic Arms Reduction Treaty (START), which is set to expire in the next few years.

Both nations should also work together to establish rules of the road and a clear set of norms in cyberspace. Neither side has any interest in seeing conflicts waged on the Internet break out into a shooting war between nuclear superpowers.

Fifth, Washington must view the U.S.-Russia relationship in the context of a rising China – the true threat to America’s national interest for decades to come.

Moscow and Beijing share strong ties now. But over the long term, Russia is surely concerned about the future, as China grows ever stronger on its doorstep.

As China become more powerful and prosperous, it has sought to undo the post-World War II order in Asia. China feels that arrangement is outdated because it was crafted when China was weak and broken, part of a century of humiliation that must be atoned for.

From claiming parts of the sea as its own “blue-water territory,” trying to subjugate and diminish Taiwan’s democracy, and using its newfound economic military muscle to dominate Asia, Beijing seeks to turn the vast Indo-Pacific region into its own sphere of influence.

China, at some point, could turn its attention to the nearly empty stretches of land in Russia’s Far East, some of which were part of Chinese empires of the past. With vast tracts of land filled with nearly limitless natural resources on Beijing’s doorstep, Moscow would be wise to be wary – and consider stronger ties with America as an insurance policy of sorts.

As China and America buried decades of strife to take on the Soviet Union, we may someday see Moscow and Washington work together in the same way to contain Beijing’s future aspirations.

Finally, no matter what happens at the Trump-Putin summit Monday, all Americans should be rooting for President Trump. All of us benefit when there is dialogue between even the most bitter of adversaries – especially ones that have thousands of nuclear warheads that could turn our planet into atomic ash.

We should recall how the left cheered when President Obama tried to reset U.S.-Russia ties. They should, at the very least, give President Trump the space to see what is possible. But we know they won’t. And that is a real shame.