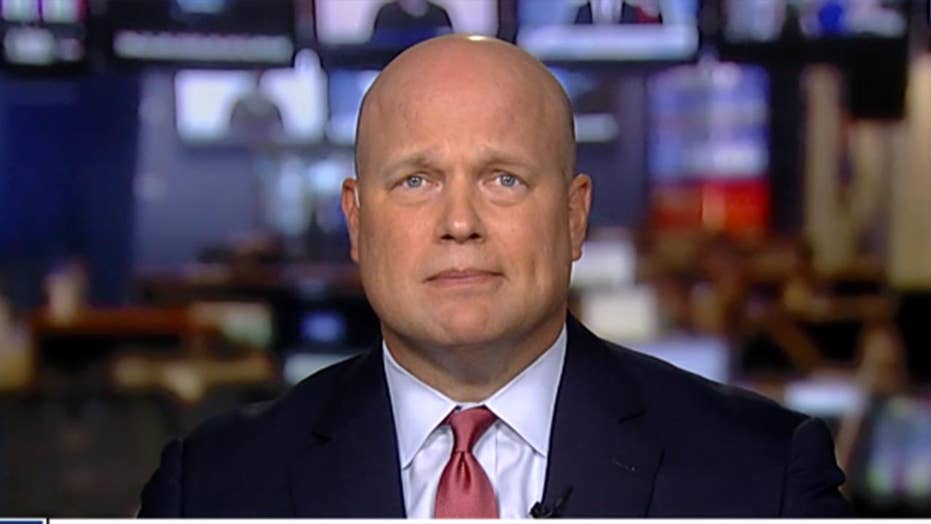 "I still can't find any facts that suggests the president did anything wrong," says Matt Whitaker, former Acting Attorney General, discussing if impeachment is "dead on arrival" in the Senate without the whistleblower's testimony

As the House Intelligence Committee begins the public hearing portion of its impeachment inquiry against President Trump on Wednesday – an inquiry that has been only approved by partisan Democrats who control the chamber – Americans are asking themselves: what does this mean for the future of our country?

We are entering an incredibly divisive moment in American history. Democrats will continue to move the factual “goalposts” and deny the president fundamental due process and fairness – bedrock constitutional principles at the foundation of our country.

Democrats in the House will cherry-pick the witnesses and thereby paint an inaccurate picture of what the president is alleged to have done.

ADAM SCHIFF, DEMOCRATS 'HAVE NOTHING ON THE PRESIDENT, TOP REPUBLICAN SAYS

There has been no witness – other than the rough transcript of the July 25 phone call between President Trump and Ukrainian President Volodymyr Zelensky – that has offered a firsthand account of what President Trump did regarding Ukraine military aid and a possible investigation into former Vice President Joe Biden’s corruption.

The real question after this week is which side’s narrative will be stronger.

The Democrats’ allegation that the president attempted extortion or bribery (very high bar, requiring direct evidence)? Or the Republicans’ belief that the president was required through our mutual legal assistance treaty with Ukraine to request that the country look into potential corruption by Biden and his son Hunter, who was highly paid to serve on the board of a Ukrainian natural gas company?

But the broader question that the American people should ask is: Is it the highest and best use of the time of the House of Representatives to spend weeks looking for any actual evidence of the president violating the law? And should the Senate be tied up for a month or so conducting a trial if the president is impeached less than one year before our next presidential election?

Should Congress instead pass the U.S.-Mexico-Canada Agreement on trade? Should our elected lawmakers take action to reduce suicides among military veterans? Should Congress help our farmers compete on the world stage and assist small businesses and entrepreneurs with a regulatory and tax burden that is quite frankly too high?

Where are statesmen and stateswomen in Congress? Why aren’t Democratic leaders speaking out against this partisan impeachment charade, knowing the permanent damage it is going to inflict on our country?

I know that America’s founders would never have imagined the situation that House Speaker Nancy Pelosi and House Intelligence Committee Chairman Adam Schiff, both California Democrats, have created by choosing this path to undo an election of a duly elected president of the United States.

Someone once told me early in my career that politics is a sport played with blunt instruments. We should fully expect that – if this impeachment effort has any success in hurting President Trump’s reelection in 2020 – an impeachment inquiry will be the blunt instrument of future elections.

We will not be better off as a republic if the president is impeached on a purely partisan vote in the House.

Many Democrats in the House do not come from competitive districts, and quite frankly aren’t concerned about what this impeachment will inflict on the entire country. They appear to only want to protect their left flanks from potential primary challenges.

Impeaching President Trump on completely partisan grounds is bad for our country and has a long-term consequence of being a new blunt instrument that cannot be returned to the sidelines.

How ironic it would be if the Democratic bloodlust to destroy President Trump winds up giving him four more years as president.