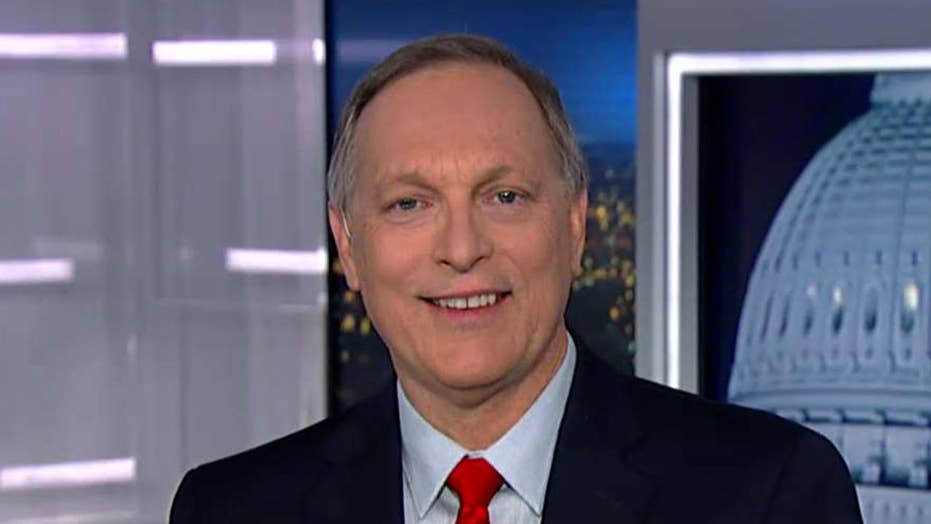 Rep. Biggs: White House not given ample time to prepare for impeachment hearings

Democrats have not thought through what history will say about their impeachment obsession, but I suspect that, years from now, people will say something like, “Are you kidding me?”

Even though Democrats and their accomplices in the left-wing media seem oblivious to the tendentious proceedings that they have accelerated, they certainly seem to sense that something is off. That must be the case, because House Intelligence Committee Chairman Adam Schiff, Judiciary Committee Chairman Jerry Nadler, Speaker Nancy Pelosi, and their obsessively attacking minions are reaching for legitimacy. But you can’t quench this dumpster fire.

Instead of evidence of wrongdoing or criminal conduct from witnesses, Democrats have tried to build a case on gossip and rumor propelled by animus toward the president. The so-called fact witnesses were anything but that. Their witnesses related what they heard from someone who heard something from someone else. The witnesses then made assumptions on the tittle-tattle.

STEVE HILTON: TRUMP FACES IMPEACHMENT BECAUSE DEMOCRATS KNOW HE'S A SUCCESS -- AND THEY CAN'T STAND IT

Democrats have propounded these unsubstantiated rumors and ignored that the direct evidence.  The fact is that the transcript of the July 25 call between President Trump and Ukraine’s President Zelensky is consistent with the statements from both parties who have said there was nothing improper.

The House Judiciary Committee’s recent witnesses were all law professors, three against one in favor of impeachment of this President due to their own inherent biases. Yawn.

Did any of the three lefties have direct information or knowledge of a single fact of an impeachable act? No, but they did display incredible hatred toward President Trump.

One was so partisan that she must cross the street if she encounters a Trump property. She was also dismayed that the committee might not have considered her hardship at having read transcripts on Thanksgiving Day to prepare for her role in the hearing.

The Harvard Professor on the panel told the committee that he had been an impeachment skeptic until he learned of the July 25 phone call between President Trump and President Zelensky of Ukraine. Of course, that was a big, fat lie.

The president is wise to let this historically unsound, claptrap of an impeachment run aground without him. It is irrevocably illegitimate.

In reality, he had written and tweeted many times since President Trump’s inauguration that the president was subject to impeachment for exercising his constitutional authority to pardon someone or for tweeting about people the professor liked in a way he didn’t find acceptable.

The testimony of George Washington University Law Professor Jonathan Turley was excellent, not solely because he was right in describing this as the thinnest pretext for and the fastest procedure for impeachment in history, but because he acknowledged plainly his potential biases and that he had voted for someone other than President Trump.

The Democrats are in such a rush to remove our duly elected president precisely because the evidentiary record is without merit and they are grasping at legitimacy.

The Democrats have tried to hide their lack of evidence by accelerating the process, truncating the procedures and stealthily gathering “evidence” in secret hearings in the basement bunker of the Capitol.  Instead of getting a full picture, Americans are seeing only the snapshots that the Democrats want them to see.

Last week for instance, Chairman Nadler offered (on very short notice) the opportunity for the president’s attorney to appear at the first House Judiciary hearing on impeachment —without initially revealing who the witnesses would be before the committee. Then Nadler, Schiff, and Pelosi claimed that the president was thumbing his nose at them and their incredibly “fair” process.

But, why should the president give credibility to this kangaroo court?

The Democrats are holding an impeachment inquisition in search of a crime. This is a parlor game with a predetermined outcome. Only the Democrats and the lefties in the media that rigged the game are upset that the president refuses to play along. He’ll have an opportunity to join the game if it moves to the Senate where he will see an even playing field.

The president is wise to let this historically unsound, claptrap of an impeachment run aground without him. It is irrevocably illegitimate. A fairer process awaits in the Senate.

Future generations will look at what the Democrats have done in their quest to remove the president and will understand how the left has riven this nation, without evidence, in a blatantly unfair process, for a transparently political purpose.