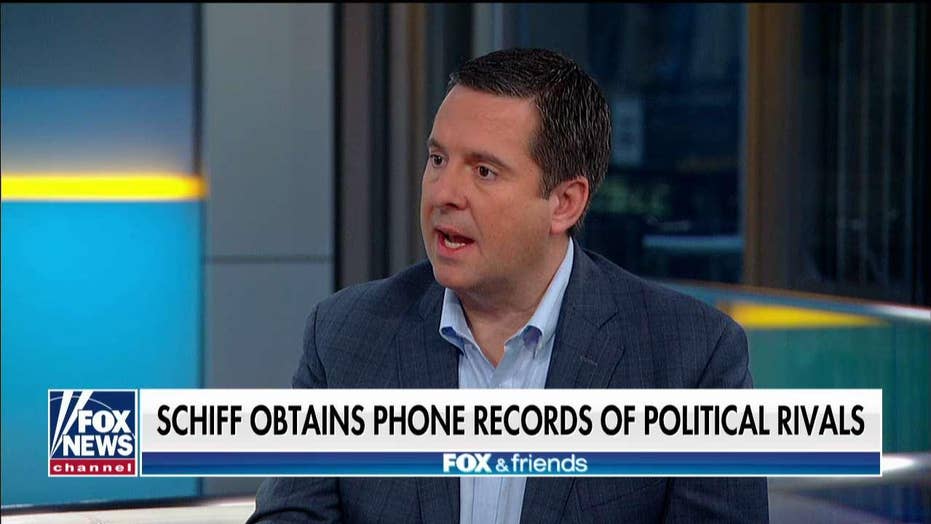 I join many Americans in being sick and tired of powerful, entrenched Democrats like House Intelligence Committee Chairman Adam Schiff breaking rules, crossing the line and never being held accountable.

This is why I’ve called for a tit for tat. I want Schiff’s phone records to be subpoenaed by the only person in Washington with the power and opportunity to do it.

On Tuesday we learned that Schiff, D-Calif., subpoenaed AT&T for the records of telephone calls between President Trump’s personal lawyers, an American journalist, and – the most troubling – Rep. Devin Nunes, R-Calif., the ranking member on the Intelligence Committee.

None of these people were notified that their call records were being subpoenaed. They were surprised to see their private phone records published in Schiff’s report arising out of the impeachment inquiry his committee conducted regarding President Trump.

It doesn’t take a constitutional lawyer to recognize that subpoenaing these call records violates the spirit of the Constitution’s Fourth Amendment, which prohibits unlawful searches and seizures.

Kimberley Strassel, writing in The Wall Street Journal, called Schiff’s obtaining phone logs of political rivals “a stunning abuse of congressional power.” She noted that Schiff is the first congressman to use his official powers to spy on a fellow member and brazenly publish the details.

Nunes said on “Fox & Friends: Weekend” Saturday that he will take legal action in response to Schiff’s action.

"I believe I am the first member of Congress ever to have [my] phone records exposed like this," Nunes said. "We're definitely going to take legal action.”

"We need to get to court to try to stop that from happening again," Nunes added.

The fact that Schiff was so brazen as to publish the subpoenaed phone logs is what bothers me the most. It signals he knows he’ll get away with it.

Well, I don’t think we should let him.

Unsurprisingly, the mainstream media have given Schiff a free pass. They’ve gleefully folded Nunes and his phone records with Rudy Giuliani, President Trump’s personal attorney, in their snowballing conspiracy theory that is fueling the impeachment inquiry.

Of course, not all media are so cowardly. Mark Levin, Tucker Carlson, Sean Hannity and Kimberley Strassel among others have rightfully called Schiff out for his abuse of power.

Sadly, in the current climate, a Wall Street Journal column or comments by a prime time host on Fox News Channel amounts to just a slap on the wrist for Schiff.

That is why I believe it is time to give Schiff a taste of his own medicine. Time for us to see Schiff’s call records and reveal if he coordinated with the whistleblower and to what extent he has put national security at risk in his campaign to impeach President Trump.

Graham replied and said doesn’t think that’s a good idea, explaining that “when members start subpoenaing each other as part of Oversight, the whole system breaks down.”

I share Graham’s concern. I want to be very clear – I think surveilling members of the opposite political party is a disgrace. But I don’t think it will stop unless we start fighting back. We need to show Mr. Schiff that he can’t just abuse his power and get away with it.

In a sense, this episode is a small illustration of the larger fight that’s embroiled Washington.

Democratic leaders like Schiff have chosen to abuse their power of oversight to politically damage a sitting president ahead of his reelection bid. Republicans, independents – even law professor Jonathan Turley, who testified before the House Judiciary Committee last week and said he didn’t vote for Donald Trump – are rightfully calling them out for it.

If we don’t push back against this impeachment sham, we all lose. The country loses. We need to signal to Democrats they will not get away with their abuse of power anymore.