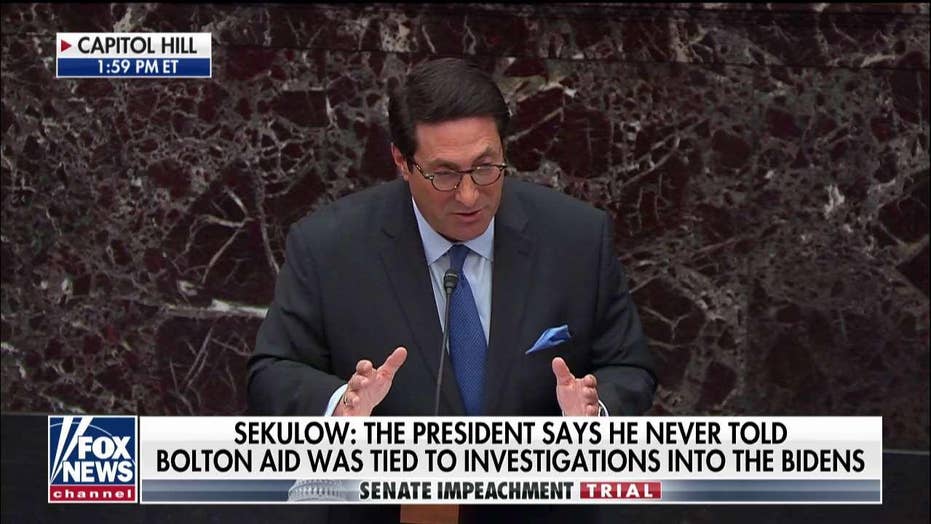 Jay Sekulow: Trump impeachment based on a policy dispute, not violation of law

The criminalization of politics, sadly, has long been part of our history. After President George Washington briefly unified the country, the future direction of our young nation was at risk during the term of President John Adams. There was such division and anger directed at Adams by newspapers and his opponents that the Federalists – yes, the party of many of the founders – passed the Sedition Act.

Under that law, criticism of the president could result in fines of up to $2,000 (a princely sum in those days) and two years in prison. The enforcement of the act took on more than partisan dimensions.

As Jon Meacham wrote in his book “Thomas Jefferson: The Art of Power”: “… so began a furiously divisive time of intensity and vitriol. Jefferson and the Democratic-Republicans believed they were no longer expecting but were instead experiencing the end of American Liberty. . . . The prosecutions under the new laws were egregious. Republican editors were arrested, indicted and tried for publishing pieces the Adams Administration deemed seditious.” A Vermont congressman endured the same fate.

Decades later, the impeachment of President Andrew Johnson was largely a fight over policy with the impeaching “radical Republicans” not wanting Democrat Johnson to fire the Republican secretary of war – one of his cabinet members. When Johnson did, the House Republicans voted to impeach him.

Most Democrats believe, egged on by their supportive media, that President Bill Clinton’s impeachment was really motivated by policy differences.

Then-Texas Republican Gov. Rick Perry was subjected to the criminalization of politics in 2014 when he was indicted for abuse of power at the hands of his political opponents.

However, nothing in our history compares to what has occurred in response to the rise of Donald Trump. The resistance to Trump is the greatest resistance to a president since the South greeted President Abraham Lincoln’s inauguration with secession.

In Trump’s case, the Washington Democrats and their sympathizers in the Justice Department and the FBI have used every legal and extra-legal avenue at their disposal against President Trump – from lying to the Foreign Intelligence Surveillance Court, to leaking their way to and through the investigation by then-Special Counsel Robert Mueller, to a partisan impeachment vote.

Along the way, due process has suffered more abuses than in any other episode in American history. While the question of whether Trump was ever going to be removed from office was never in doubt, the future of the criminalization of politics remains an open question.

It is worth noting that the Federalist overreach with the Sedition Act split the party. That split played a role in Adams’ failure to win reelection and the eventual demise of the Federalist Party.

Will Democratsarty suffer because of their actions criminalizing politics? It depends.

Republicans in the Senate cannot simply vote against impeachment. They have to make it clear that the criminalization of politics – via the abuse of courts, investigations, whistleblowers and impeachment – cannot be allowed to succeed.

Republicans must cast the last three years as an unacceptable rise in partisanship at the expense of the country. They must promise they will continue to allow people to realize their own futures instead of allowing an escalating risk that their votes will be undone by the criminalization of politics.

For their part, American voters must vote their dissatisfaction with the tactics of division as well. The Democrats must lose at the ballot box in order to understand the gravity of what they are doing. If they do not, this will not be the last impeachment in our time, but just the beginning of even more division to come.