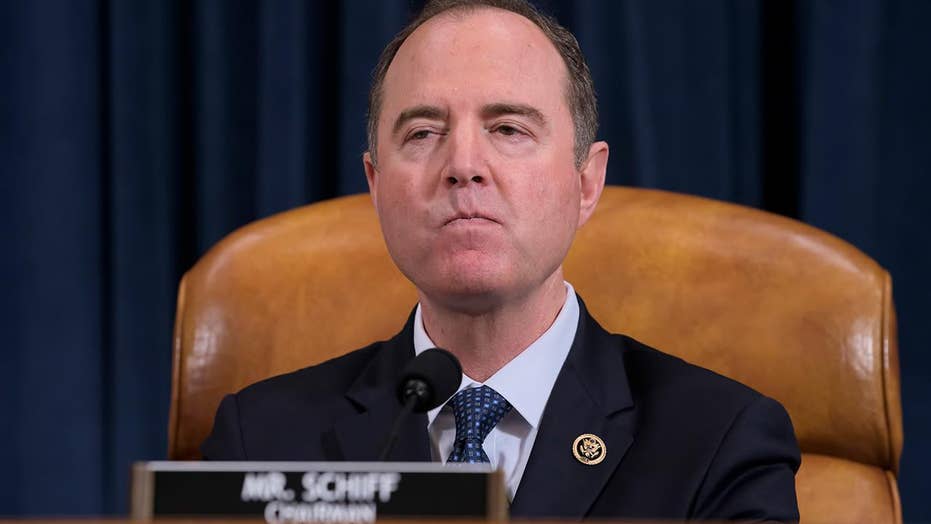 House Intelligence Committee Chairman Adam Schiff, D-Calif., is basking in the spotlight. He has gone from a small town upbringing to become the inquisitor in chief for the Democrats’ effort to impeach President Trump.

While his home state of California can’t keep the lights on and while fires burn, Schiff could be found in front of every available camera since Trump took office, claiming to have evidence that the president had colluded with Russia in order to get elected. Despite Schiff’s constant promises to that effect, not even Special Counsel Robert Mueller could bail Schiff out of his false statements.

Russian conspiracies have now turned to Ukrainian stories – and once again Schiff is at the center of it all. After the abject media failures of House Judiciary Committee Chairman Jerrold Nadler, D-N.Y., and the unfortunate death of Rep. Elijah Cummings, D-Md., Schiff finds himself right where he wants to be – in the spotlight on impeachment.

The glare of the lights, however, has not convinced Schiff that he should run his impeachment inquiry in a just way with due process. Never in our history has there been such a one-sided inquiry in which only the chairman – and Schiff alone – decides what witnesses shall appear before his committee.

In the past, both parties had subpoena rights. Now, however, Republicans have been effectively denied the ability to counter the made-for-television story Schiff wants the country to believe about this president.

Moreover, Schiff and his partisan counsel felt free to ask their early witnesses questions about the activities of the former Vice President Joe Biden and his son Hunter – apparently believing the Bidens would be exonerated.

Those witnesses indicated concerns about the actions of Hunter Biden and exposed the fact that there was an ongoing investigation into the Ukrainian natural gas company that was paying Hunter Biden to serve on its board at the time Joe Biden got the prosecutor in charge of the investigation fired. But Schiff is refusing to allow Republicans to call witnesses to delve deeper into that story. This is politics folks – not justice.

Schiff is also covering for the so-called whistleblower. Schiff claims it is for the safety of that person. However, it is more likely Schiff is concerned with his own possibly illegal activity.

The law requires any so-called whistleblower from the intelligence community (where the whistleblower on Ukraine has been reported as working) to submit his or her complaint to the director of national intelligence before meeting with any congressional staff – in this case, staffers working for Schiff.

The purpose of the law is simple. The director of national intelligence, who deals with national security, should receive unvarnished information – not politically motivated stories.

That didn’t happen. Instead, the so-called whistleblower met with Schiff’s people and was coached before making his complaint to the director of national intelligence. That could well be a crime and Schiff is obstructing any inquiry into that crime. Not only that, Schiff patently lied about his committee’s early contact with the so-called whistleblower – also a form of obstruction of justice.

I should note that Schiff isn’t ignoring California altogether. To the contrary, rather than attend one of the secret depositions of witnesses in the impeachment inquiry, Schiff jetted to California last weekend to give a speech at the California Democratic Convention.

Given the miscarriage of justice Schiff has undertaken over the last years, it was no surprise that, in front of the cameras, Schiff claimed Trump was a “charlatan.”

There was one surprise in his invective, however. Schiff proclaimed the following: “We will send that charlatan in the White House back to the golden throne he came from ….  And you know why? Because we vote. How do we build another big, beautiful wave? We vote.”

Think about that statement.

Clearly, Schiff knows that this inquiry he is running – which is firmly undemocratic and violates due process – is going nowhere, and neither is President Trump. Schiff knows the Senate will reject this latest resistance to the results of the 2016 election. It also means that Schiff knows this impeachment inquiry is just a political exercise meant to get attention for himself and to motivate Democratic voters in the 2020 elections.

The irony of Adam Schiff is that the congressional seat Schiff he holds had been previously occupied by Rep. James Rogan – one of the managers of the impeachment of President Bill Clinton. Rogan had been targeted for defeat by Democrats because of the role he played in that impeachment.

Given the constitutional implications of his acts, and the damage being done to the Republic by Schiff and his cohorts, the one person who should be targeted for defeat in 2020 is Adam Schiff.