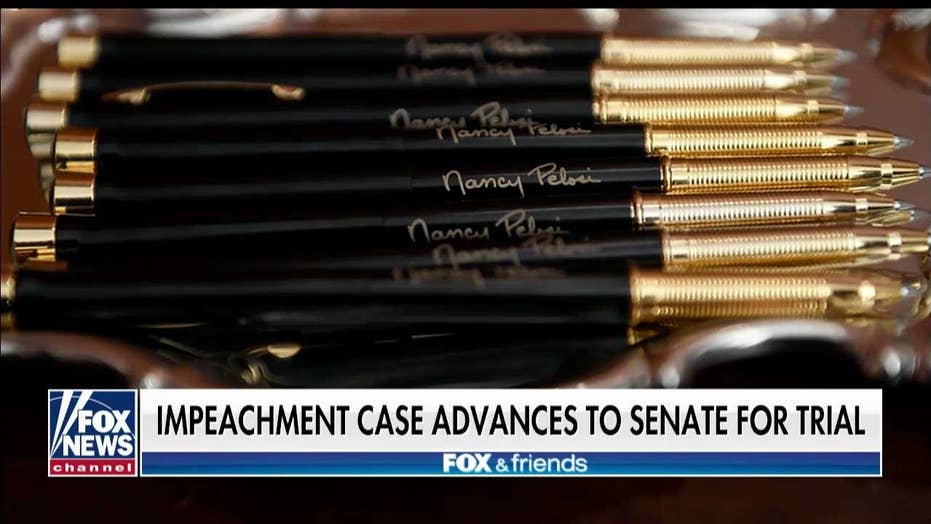 'Friends' on Pelosi's souvenir impeachment pens: Did she just sign over the House in 2020?

What a difference a year makes. Last spring, Speaker Nancy Pelosi sounded an alarm of caution over a hyper-partisan impeachment. In the fall, she flipped her position to go all-in on an impeachment scenario that would pass the House with bipartisan opposition.

Her gleeful distribution of ceremonial pens heralded the cementing of a historical asterisk next to the presidency of Donald J. Trump. It was the culmination of a three-year spaghetti-throwing operation undertaken by Democrats to weaken the president and the Republican Party, if not overturn the 2016 election.

As the afterglow of her impeachment vote victory fades into history, Pelosi may well be left with an asterisk of her own – an indelible black mark on her career. And her comments over the last several weeks reflect the realization that again, she bet on the wrong strategy and lost.

Comments about the president being “impeached for life” or that he couldn’t possibly be acquitted by the Senate because “You can’t be acquitted if you don’t have a trial…” are telling. They are the empty if not irrational words of someone who probably knows her speakership is now in jeopardy because she failed to manage the radical impulses of her conference. Pelosi embraced a shallow impeachment scheme that rested on dubious legal arguments, hearsay evidence and bipartisan opposition.

Trump’s acquittal in the Senate means an energized Republican Party, reduced credibility for the speaker and a year of Democrat House control wasted on investigations that yielded nothing.

While Pelosi has tied up all her political capital on investigations and impeachment, Trump has continued to advance on a number of key issues, including jobs and the economy. It’s having an impact.

The latest polling by AP-NORC Center for Public Affairs shows a clear enthusiasm deficit for Democrats concerning the presidential campaign. According to Real Clear Politics, three polls over the last month have also seen Democrats slip in the generic congressional ballot to within the margin of error, potentially marking a sharp shift in voter preference.

While it might not be enough to wrest control of the House away from Democrats, Pelosi’s gamble will imperil additional members of her conference, leaving her much weaker come next January.

While it might not be enough to wrest control of the House away from Democrats, Pelosi’s gamble will imperil additional members of her conference, leaving her much weaker come next January.

A decade ago, Nancy Pelosi went all-in to advance the purely partisan and controversial ObamaCare scheme. It cost her the speakership. This effort to eject President Trump from office means again resting her future on a political power play at the expense of good government. Pelosi will now spend the next year suggesting that the Senate trial didn’t count and assenting to even more investigations.

It’s the sad death spiral of a long career that will end with her sacrificing her remaining credibility and speakership yet again to ram through a radical agenda. With the Trump acquittal, Pelosi’s career will be marked not only by losing her majority over ObamaCare, including her infamous comment, “we have to pass the bill so we can find out what is in the bill,” but now a feckless attempt to upend the electoral process in reckless fashion.

Nancy Pelosi and House Democrats gave President Trump an asterisk. Yes, it will be a permanent footnote in the historical record. Pelosi’s political asterisk will be far worse. It will connote the continued erosion of confidence in her leadership and be a mark of growing irrelevancy after a career that once broke a political glass ceiling.