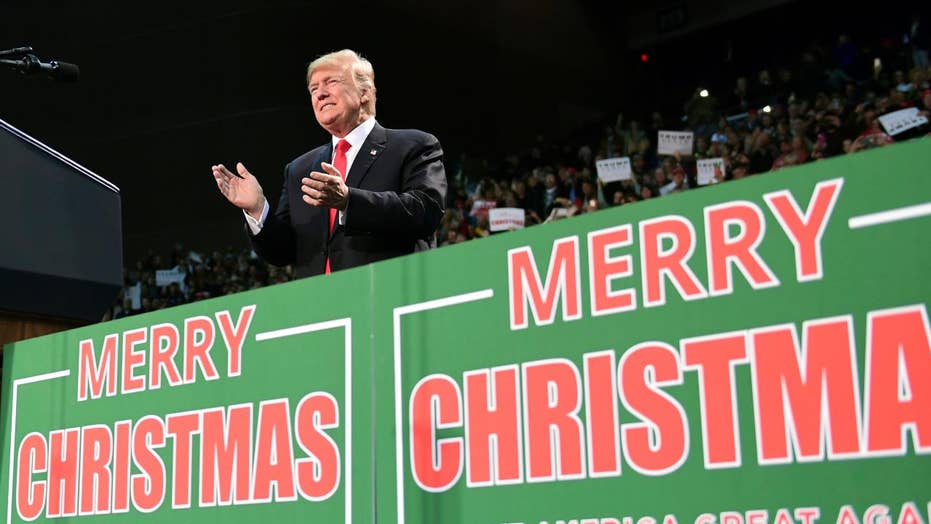 Liberal media attack Trump over use of 'merry Christmas'

CNN's Don Lemon claims the president's holiday greeting is actually a 'dog whistle' for his base.

Leave it to the mainstream media to concoct some sort of wild-eyed theory that President Trump's promise to say "Merry Christmas" is some sort of coded language for white nationalism and white supremacy.

CNN host Don Lemon was among the most high-profile mainstream media minions to advance the race-baiting narrative. Click here to watch the video.

"This is a dog whistle to the base because no one has ever stopped using Merry Christmas," the Clinton News Network host said during a Dec. 21 broadcast.

In reality, the entire CNN network is a dog whistle for race-baiting, anti-Trump, America-bashing pinheads. And I said as much on Tuesday’s edition of “Hannity” on the Fox News Channel.

The mainstream media holds fast to its belief that Christmas is supposed to be some sort of all-inclusive, one-ornament-fits-all, religiously-neutral holiday.

But CNN is not the only mainstream media outlet to get its tinsel in a twist over the president's frequent use of the words, "Merry Christmas."

Consider this headline from Newsweek: "How Trump and the Nazis Stole Christmas to Promote White Nationalism."

At first glance, I just assumed one of the copy editors had slurped a bit too much egg nog. But it turns out, Newsweek was dead serious.

"Trump has been using the so-called war on Christmas to wage a culture war that pits multicultural liberals against Christian conservatives. He began doing this long before Christmas. Meanwhile, some members of the religious right support Trump’s most nationalist, race-baiting form of political rhetoric, including his reclaiming of Christmas," Newsweek declared.

Newsweek moaned about how the president is "promoting a version of the holidays that excludes members of other religions, and that his crusade to bring back Christmas is part of a larger attempt by the president to define America as a country for white Christians alone."

"Wishing people merry Christmas' instead of 'happy holidays' is thus in line with Trump’s decision to ban citizens of Muslim-majority countries from entering the United States, critics say. It fits neatly with his refusal to condemn white supremacists when they march against diversity, and with his condemnation of athletes who protest police brutality against black men," the magazine noted.

Far be it from me to offer psychological advice, but it sounds to me like Newsweek is a few nuts shy of a fruitcake.

However, the mainstream media holds fast to its belief that Christmas is supposed to be some sort of all-inclusive, one-ornament-fits-all, religiously-neutral holiday.

And yet they don't seem to have a problem with the exclusivity of other religious holidays -- like Ramadan. Why don't we hear Don Lemon demanding that Muslim holidays be inclusive?

I believe I know the answer.

It’s because the attacks on President Trump and Christmas have nothing to do with inclusivity. It’s about marginalizing people of faith and silencing Christianity in the public square.

And in spite of what Don Lemon or CNN or Newsweek says, Christmas will always be an exclusively Christian holiday -- a moment for us to celebrate the birth of the newborn King.