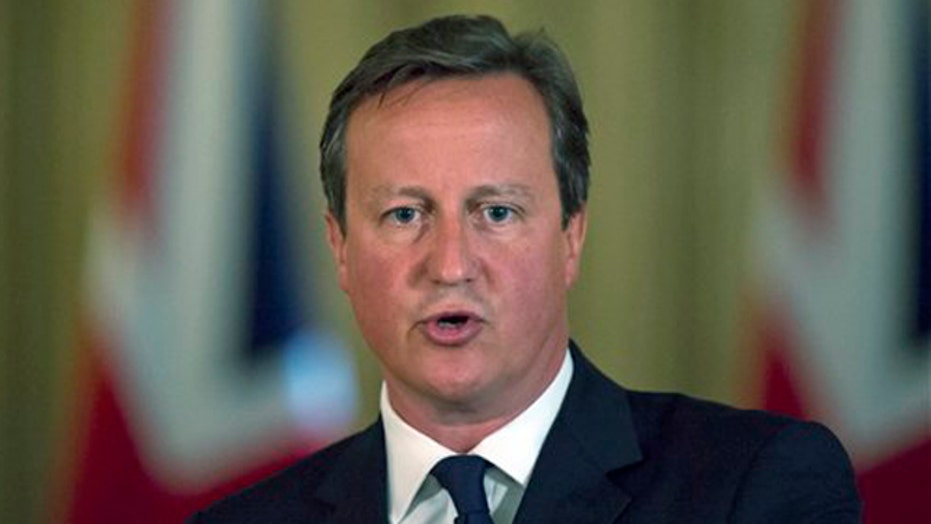 Will there always be an England? You know, the England of Buckingham Palace and Big Ben? The England of Shakespeare and J.K. Rowling? The England of afternoon tea and fish and chips? The England of the Magna Carta and a tradition of due process and free speech that was flourishing when America was still wilderness? Will this storied England always exist?Maybe not.

According to one Englishman, Nigel Farage, head of the United Kingdom Independence Party (UKIP), England’s freedom is under severe threat. As he explained in an exclusive interview with Fox News Opinion, “We’re seeing the abolition of the UK as a nation.”

The enemy of the UK, as Farage sees it, is a foreign foe. But interestingly, it’s not a foreign military foe -- it’s a foreign bureaucratic foe -- the European Union (EU).

To most Americans, the EU is a hulking abstraction; it’s an agglomeration of 28 countries and more than 500 million people, from Finland in the north to Greece in the south, from Bulgaria in the east to Portugal in the west. The capital of the EU is Brussels, Belgium, which has now become a boom city for bureaucrats, lobbyists, and favor-seekers -- think Washington, D.C. on steroids.

And somewhere, on the fringe of it all, is the UK -- it’s one of those 28 EU-member states.And that’s the problem: If the UK is just one of 28 states, submerged in a new continental superstate, how much independence can it have?

Farage estimates that 75 percent of the laws that affect Britons are now made in Brussels, not London. As he puts it, “English politics are now irrelevant to the corner store on High Street”—their term for Main Street. Important decisions are being made by “figures that nobody in England voted for, and, indeed, cannot name.”

Just last month, the EU banned high-powered vacuum cleaners, on the theory that too much energy consumption could contribute to “global warming.” This new EU directive, which supersedes national law and precedent, comes on top of earlier dictates from the EU covering televisions, washing machines, and refrigerators. And as the UK Telegraph newspaper reports, the EU will soon be going further:

"A study ordered by the European Commission has identified up to 30 electrical appliances including lawn mowers, smart phones and kettles that could be covered by the EU’s Ecodesign directive outlawing high-wattage devices."

In other words, in the view of Farage and an increasing number of Britons in the UKIP movement, the EU is more than an abstraction -- it’s a very real threat. Farage warns, “The EU is bureaucratic and anti-democratic. It is utterly taking away the ability of nations, including the UK, to determine their own future.”

“You Americans,” Farage continues, “are right to fear big government.” But, he adds, “Americans can vote to change their government.” In today’s UK, he says, it’s different: “Our situation is very much worse.”

Farage is asked: To whom is this EU government accountable? He answers with a laugh: In theory, the EU is accountable to its 505 million citizens, but in practice, the decisions get made from the EU bureaucracy. And that’s that—no appeal. Farage decries the “democracy deficit” at the heart of the EU structure, and that, he claims, is exactly what the Eurocrats want. In Brussels, they dream of unchallenged, and unchallengeable, continental dominion.

To illustrate his point, Farage holds up his British passport; the first words on the cover read, “European Union.” That is, the EU comes first, then, lower down, the UK. That might seem like a small thing -- but only to those who think that the flag and other symbols of national sovereignty are a small thing.

For purposes of comparison, we might imagine how Americans would feel if our passports were emblazoned with, say, “North and South American Union.” We might then wonder: How long would America remain America -- with all its traditions, political and cultural -- if its governance were shared jointly with, say, Mexico, Canada, Brazil, and two-dozen other countries? What would become of the U.S. if it were a distinct minority in its own hemispheric federation?

Which brings up another key issue for UKIP: the sanctity of borders. Under the rules of the EU, anyone with an EU passport can go anywhere. That open-borders policy, according to Farage, has meant huge shifts in population within the EU, disrupting social patterns and lowering wages. And it’s also led, he adds, to something even more serious: an open-borders attitude that poses a serious security threat.

According to Farage, multicultural ideology has meant that the UK -- and the West as a whole -- has been ill-prepared to do stop the threat of jihadi radicalism in general, and ISIS in particular. As he explains, “We’ve seen a huge increase in radicalization within the U.K.”

And why is that? “For decades now,” he answers, “we’ve been encouraging people not to come together and be British but to live separately, to live apart.” In other words, the authorities have been celebrating, and subsidizing, multiculturalism in the U.K. Thus in Farage’s view, the multicultural globalist ideal—also at the heart EU vision—has had a disastrous impact on the streets of London, Leeds, and Liverpool.

Indeed, Farage fears that the EU is so politically correct that it will actively stymie British efforts to fight the ISIS threat. He flatly predicts, for example, that Cameron’s recently announced get-tough policy on Islamic radicalism will be invalidated by the European Convention on Human Rights. That is, judges in some faraway place will undermine local control and security. Does any of that sound familiar to Americans?

Yet in the face of this ongoing threat to British liberty and sovereignty, Farage himself has been energetic, even entrepreneurial. Blessed with a quick tongue and a quick smile, he has built UKIP into a major force over the last two decades. His message is clear: As he says of the U.K. and the European Union, “We want a divorce.”

Amusingly, Farage himself was elected to serve as a Member of the European Parliament in 1999. Yes, he has been a Daniel in the EU lion’s den for the past 15 years. Indeed, if one goes to Farage's website, one can see him in full gadfly mode, throwing humorous barbs at the Eurocrats.

Meanwhile, Farage’s calculated cheekiness has begun to pay off back home. Just last month, a Conservative Member of the U.K. Parliament, Doug Carswell, became the first MP to join UKIP. Admittedly, Carswell is just one of 650 MP’s, but Farage predicts that his party will have a dozen or more seats after the 2015 national elections. And if the election results are close between the three major parties, Conservative, Labour, and Liberal Democrat, then UKIP could hold the balance of power in a future coalition government.

But wait just a second. We might ask: While the EU has been tractor-beaming the U.K. into its bureaucratic borg, where have those three U.K. political parties been?

Farage answers with a grim chuckle: For decades, he says, the political elite in the U.K, right as well as left, have supported the EU. Why? The left tends to support big government, the bigger and the better—for the left, the United Nations is the enduring role model. Meanwhile, the free-market right tends to support larger markets for business and transnational trade harmonization.

Moreover, it must be recalled, another factor has bolstered the case for the EU in the minds of Europeans: the horrible history of Europe in the 20th century. Indeed, two monster wars that left perhaps 60 million dead—that history has left many well-meaning Europeans thinking that the only possible solution is some sort of peacekeeping political federation, such as the EU.

So we might note that there’s the germ of a good idea here: Trade is good, the free flow of ideas is good, peace is good. But as the pundit George F. Will likes to say, “The four most important words in the English language are, ‘up to a point.’” That is, even a good idea can become a bad idea, if it is taken too far.

And that’s what has happened, Farage declares, to the EU.  The union emerged slowly in the 50s and 60s; back then, it was the European Economic Community (EEC).  The UK joined the EEC 1973, when it had just nine members; at the time, even conservative English nationalists such as Margaret Thatcher supported Britain’s entry.

Yet since then, the EEC has become the EU, and the union has more than tripled in size. Indeed, its ambitions for power have multiplied even more than that. The bureaucrats in Brussels have, for example, assigned themselves “exclusive competence” in areas of trade and commercial policy. And, increasingly, as we have seen, the Eurocrats are declaring themselves to be in charge of many other things, too.

Along the way, Margaret Thatcher, who became Prime Minister in 1979, turned against the EU. Yet the forces of “European Integration” were too strong, even for the Iron Lady. After her opposition to the EU became fully evident, she was deposed from power -- by her fellow Conservatives -- in 1990. She died in 2013. Today, Farage is insistent: “If Margaret Thatcher were alive now, she’d be a member of UKIP.”

But we might ask: What about other Conservatives? What about today’s member of Thatcher’s party? Shouldn't the Tories be standing up to these encroachments? Here, Farage is merciless in his criticism of the incumbent Conservative Prime Minister, David Cameron. Cameron, in Farage’s judgment, is nothing more than accomplice to the Eurocrats; he is more than willing to see the UK disappear into the EU labyrinth. And so Farage is running a Tea Party-ish insurgency within the Conservative Party; his target is Cameron, whom he regards as just another post-patriotic globalist.

For his part, Farage is an unabashed English patriot: His grandfather fought and was wounded in the Great War, as the British recall World War One. During World War Two, still active, he volunteered for the Home Guard, along with many others of his generation.

Interestingly, Farage’s favorite show when he was growing up in the 60s was “Dad’s Army,” a nostalgic comedy about that same Home Guard in WW2. As Farage says fondly, thinking back to that sitcom, “We Brits do self-deprecation like nobody else.” That is, the characters were mostly bumblers and dodderers who would have no chance of actually defending themselves, or their country, if the Nazi Wehrmacht had been able to cross the English Channel and invade.

And yet at the same time, Farage continues, patriotism was at the core of “Dad’s Army,” laughs notwithstanding, The men of the Home Guard, he continues, were portrayed as “ridiculously brave.” That is, they would have fought to the last man, no matter how hopeless the fight.

That’s the sort of plucky resolve that Farage himself epitomizes. Two decades ago, in founding UKIP, he took on the seemingly hopeless task of reversing the EU momentum—a gravitational force that he saw pulling his nation into centralized bureaucratic oblivion. And while it’s too soon to tell if Farage will succeed in rallying Britons to the UKIP cause, this much is clear: He will die trying.