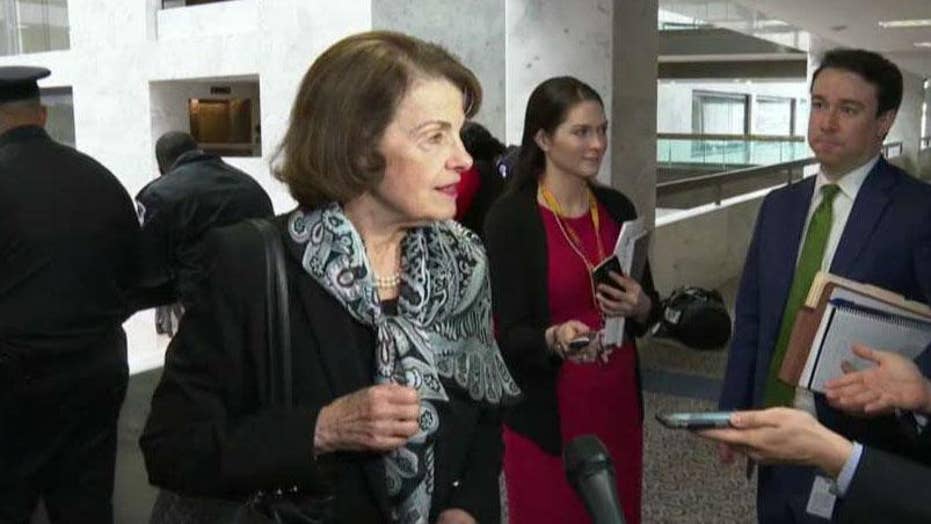 Feinstein tells kids urging her to support the ‘Green New Deal’ she doesn’t respond to ‘it’s my way or the highway.’

Doug Schoen and David Avella weigh in on California Democrat Sen. Dianne Feinstein’s exchange with a group of school kids urging her to support the ‘Green New Deal.’

Vegas oddsmakers put President Trump at a heavy favorite to win reelection with 7-5 odds. History teaches us that incumbents generally win a second term – only two presidents have lost reelection (Carter and Bush 41) since 1968. But the Trump Campaign has work to do, and the 2018 midterms demonstrated that the Democrats are resurging.

Presidential campaigns are about messaging, and the Trump team has some great messages on jobs, the economy, North Korea and tax reform, among others. But there is one message, possibly “the” message, which will win President Trump a second term, and his team didn’t even develop it. They were gifted it by the Democrats.

Trump 2020’s winning message is this: “My opponent supports the ‘Green New Deal.’”

Democratic leaders recognize how toxic the “Green New Deal” is to their party’s political success. House Speaker Nancy Pelosi and Sen. Dick Durbin have very publicly dismissed it. Just days ago, activists using children as pawns confronted Sen. Dianne Feinstein demanding her support. Her response was blunt: “You come in here and you say it has to be my way or the highway. I don’t respond to that.”

The “Green New Deal” supporters should heed the political cues, and as Sen. Feinstein told the children, “listen.” But the deal’s supporters are political novices. They made the Feinstein exchange go viral, using it as a threat to other legislators: This is what you can expect. Their leader, Rep. Alexandria Ocasio-Cortez, D-N.Y., made it clear in a tweet “we’re in charge,” and told her detractors “you’re just shouting from the cheap seats.”

This approach will not play well with blue-collar voters in swing states who despise condescension from their elected officials.

Pundits and energy experts have rightly mocked the “Green New Deal” as more a socialist manifesto than a policy. After all, it includes everything from forcing net-zero carbon emissions in a decade (impossible), to a government takeover of health care, to paying those “unwilling” to work. Notably, Michael Bloomberg and Howard Schultz, both potential presidential candidates and fervent climate change believers, have also dismissed the deal.

However, Democrat presidential candidates representing coastal elite bastions quickly backed the plan as a way of brandishing their left-wing credentials.

Sen. Kamala Harris, D-Calif., who is facing criticism for her criminal justice record as a prosecutor, has used the “Green New Deal” to point out just how liberal she now is. The same goes for Sen. Cory Booker, D-N.J., and Sen. Kirsten Gillibrand, D-N.Y. – both longtime friends of Wall Street, which is not a good look in today’s Democratic primary. Sen. Bernie Sanders, I-Vt., even made the “Green New Deal” a centerpiece of his presidential campaign launch, highlighting it in the first 30 seconds of his announcement advertisement.

Heartland Democratic candidates have been more equivocal in their support of the plan, but they have not opposed it either. Sen. Amy Klobuchar, D-Minn., called the “Green New Deal” an “aspiration,” but admitted it would “be very difficult to do.” Potential candidate Sen. Sherrod Brown, D-Ohio, is declining to sponsor the bill, but does “support a green new deal.”

From a political perspective, though, it does not matter. Expect Trump’s campaign to flood the airwaves in swing states reminding voters that his opponent supports a deal to steal their jobs.

This worked in the last presidential campaign.

In 2016, Hillary Clinton blundered: She announced her plan to eliminate coal jobs. That alone probably lost her Pennsylvania and Ohio. Yet that plan was nothing compared to the “Green New Deal’s” call to abolish all fossil fuel jobs and establish some Scandinavian socialist state.

President Trump sees this. It’s no surprise he is already attacking the “Green New Deal,” saying at a recent rally that it “sounds like a high school term paper that got a low mark.”

And it will give Donald Trump a second term.