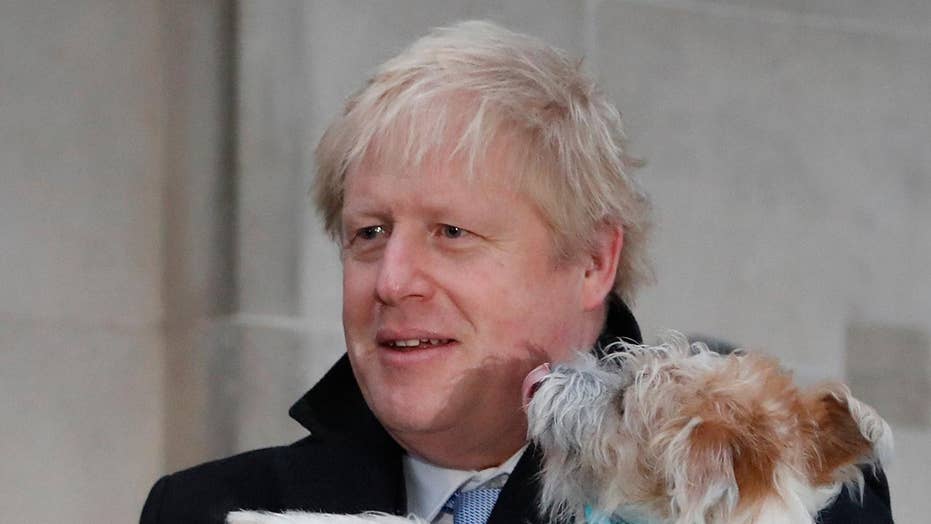 The result would pave the way for Boris Johnson to execute his Brexit plan to take the U.K. out of the European Union; senior foreign affairs correspondent Greg Palkot reports from London.

Exit polls projected that British Prime Minister Boris Johnson and his Conservative Party won a big majority of seats in Parliament in national elections Thursday. Why the victory and what comes next?

According to exit polls, Conservatives are expected to end up with 368 seats in the 650-seat lower chamber of Parliament, while the Labour Party will have only 191 seats. If those projections hold up, the Conservatives will have a majority of 86 seats.

This projected result will give Britain a strong Conservative government that should have no problem lasting five years until the next election.

Like the U.S., the United Kingdom looked like a divided country before the election. But if exit polls hold up, it seems that Britain is a lot less divided than it looked just a day earlier.

The defining issue was Brexit, the British effort to exit the European Union. While the majority in favor of Brexit in the 2016 national referendum was clear, it was also narrow. A central message of the Conservative campaign in Thursday’s election was the need to “Get Brexit Done.”

But many of the voters who backed Brexit in 2016 were Labour Party supporters. It wasn’t clear before the election that enough of them would be willing to support the Conservatives, no matter how much the party campaigned for Brexit.

The United Kingdom election results look like a lot of dramatic changes at the local level created a landslide at the national level. A Conservative win means the political map of Britain has been redrawn.

There are important comparisons to be made between the U.K. election, the 2016 U.S. election, and the recent Canadian election.

In Canada, the Conservatives won a plurality of the votes – but because they piled up those votes in the wrong areas, they lost the election.

In the U.S., by contrast, Donald Trump won enough votes in the right areas to be elected president in 2016 with an Electoral College majority, even though Democrat Hillary Clinton received more votes.

The British Conservatives followed Trump in winning over new voters and – unlike the Conservatives in Canada – won in the right areas too.

Other factors mattered as well. Britain’s Liberal Democratic Party ran a weak campaign, and this may have helped the Conservatives by discouraging voters who opposed them from voting at all.

So what comes next? On Friday Queen Elizabeth will invite the leader of the party with the most seats in Parliament – Boris Johnson of the Conservatives – to see if he can form a government. Johnson should have no difficulty at all in doing this.

For the U.S., the British results are profoundly encouraging. The fact is that Britain has rejected the pre-election, do-nothing status quo.

British voters appear to have put a Conservative government both in office and truly in power. Britain should now be able to get Brexit done by the new deadline of January 31, 2020. This, in turn, means that Britain and the U.S. will be able to negotiate a free trade area in the near future.

But a caveat is in order. With the exception of its stances on Brexit and free trade, the Conservative Party fought this election by urging more state involvement in the economy. Its policies were certainly further to the right than the Labour Party, but taxation in Britain is already at a historic high, and the Conservatives showed no interest in reducing it.

Unless the Conservative Party begins to make an effective case for conservatism more broadly, politics in Britain run the risk of drifting back to the left.

Right now, though, that caveat is just that: a caveat. The fact is that Boris Johnson took the gamble to demand, an election. If the exit polls are correct, his gamble has paid off.

There are challenges ahead, from handling Brexit to dealing with the resurgent Scottish Nationalist Party. As Winston Churchill put it, great victories always bring forth the need for greater efforts. But if the projected results are correct, Britain’s Conservatives have indeed won a great victory.

Theodore R. Bromund is the senior research fellow in Anglo-American relations for The Heritage Foundation’s Margaret Thatcher Center for Freedom.