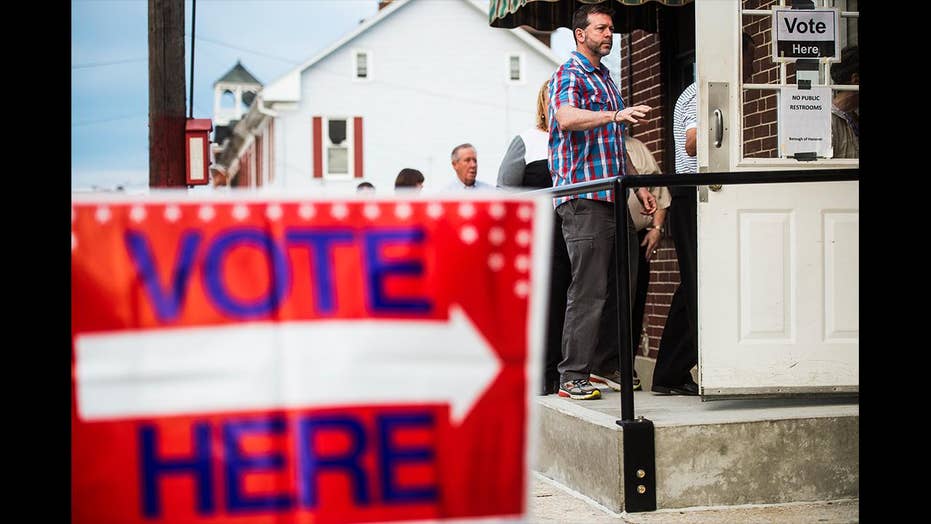 A look at five popular voting myths and an explanation of why they are not true.

All across America, millions of us cast our votes in the midterm elections Tuesday. My former boss, President Ronald Reagan, talked about this exercise in democracy in a speech he gave in 1964 titled “A Time for Choosing.”

Long before he went to the White House, our future president said in that speech: "You and I are told increasingly we have to choose between left or right. Well, I'd like to suggest there is no such thing as a left or right. There’s only an up or down."

In this politically divisive time, perhaps we should look at what divides us in this manner, rather than the traditional R or D, red or blue, liberal or conservative.

Right now in our nation we increasingly see that left and right don’t define us but instead continues to divide us.

Many conservatives still don’t want to be labeled as “Trump Republicans.” Nor do many Democrats identify with the increasing calls for incivility that some in their party are promoting.

Now, more than ever, we truly do need to decide if we want to continue the “up path” of the past two years or return to the past and undo all we have accomplished since the 2016 elections.” Up or down.” If we look at it in these terms, the choice should be clear.

If we as a people increasingly tolerant of our many differences – such as race, gender, and ethnicity – can we also try to do embrace tolerance of those with different political views?

Without looking to party, or even to a party leader, there are many indicators that we are on an upward trajectory that we should be embracing and desiring to continue.

These “up” signs include: Lower federal taxes, which benefit workers. Reduced regulations on our small businesses and job creators. The lowest national unemployment rate since 1969, including the lowest on record for Hispanics and African-Americans.

Other “up” signs are: An increased emphasis on job training and employment. The appointment of outstanding judges and Supreme Court justices. New and better trade deals. A pathway toward energy independence for our nation.

And yet additional “up” signs: A booming economy with record gross domestic product growth. A strong stock market. Reduced threats internationally from ISIS and North Korea. Increased respect for America on the world stage.

By every indication we are on an “up pathway.” Even recent signings o the Music Modernization Act and the Save Our Seas Act should show a commitment to policies reserved historically for the other side of the aisle. But not anymore.

Hypothetically removed from under the banner of the Trump presidency, I imagine this would be a desirable path for most in our nation, but somehow under his leadership, these historic accomplishments have become null and void to those who can only analyze good or bad based on party affiliation.

My hope is that instead of seeing these achievements as being left or right they will be seen as “an up” for our nation, for our economy and for the individuals who contribute to it.

This momentum upward only continues if we elect people to Congress who will support President Trump and his policies. Otherwise, the momentum of the past two years comes to a screeching halt and we will quickly make a downturn – in the economy, in our safety and on the world stage.

Some seek only to stop progress, to obstruct success and be contrary to all that is positive and good. Yet they are not offering their own pathway forward. This benefits no one.

A “down vote” in the midterms is a vote for those who side with Hillary Clinton, who believe that civility is only appropriate when you are in power or are winning.

A “down vote” is for those who, like former Obama administration Attorney General Eric Holder, believe that when your opponents go low you to “kick ‘em.”

A “down vote” is for those who believe we should listen to U.S. Rep. Maxine Waters, D-Calif., and hunt people down and get in their face and intimidate and harass them because they are working for our country as public servants in the Trump administration.

A “down vote” is for House Minority Leader Nancy Pelosi, D-Calif., to once again become speaker of the House. As speaker, she would focus the House on investigations and obstruction of the president’s agenda – an agenda that is working successfully for the American people.

There is no “up” when looking backwards or even sideways to destroy those around you. “Up” only happens with forward-looking vision and a proactive action plan. That’s what we currently have and need for it to continue.

The outcome of the midterm elections will help determine, in part, the future direction of our nation. If you can’t bring yourself to side with the right or identify with the party of the president, then consider your vote an “up vote,” rather than a partisan vote.

Our country is headed in a positive and prosperous direction. Let’s not have that be ended by protests and harassment, and obstructive and oppressive policies that threaten to bring us all down.

I increasingly believe the party lines we see in the media are artificially drawn and emotionally exaggerated. We see protests in the streets and mobs going after law-abiding citizens who happen to have a different political point of view, but I refuse to believe this represents a majority of thought.

The people I know on both sides of the aisle aren’t engaged in this type of behavior, but instead are patriotic and hardworking. They don’t let the labels of left and right isolate or identify them, but instead they get up every morning and are committed to moving themselves and those around them forward to a better future.

These people want a future that is not defined by party but by their own self-determination and dedicated perseverance. Election Day is a “rendezvous with destiny” and I hope many people have joined me in voting for the “up path.”