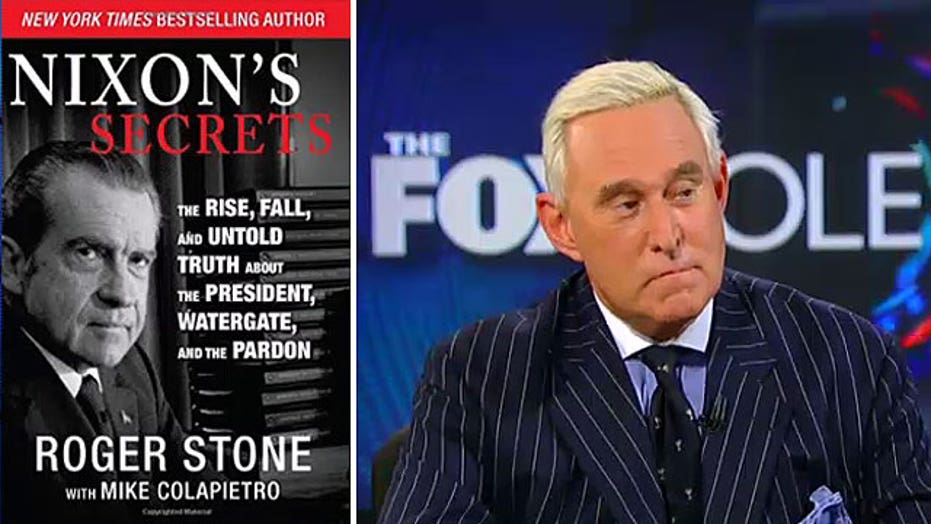 Roger Stone discusses his book, 'Nixon’s Secrets: The Rise, Fall, and Untold truth about the President, Watergate, and the Pardon'

Once, when Roger Stone was one of the most feared and loathed Republican political consultants in America, he boarded the campaign bus of the candidate he was working for at the time, spotted the reporters present, and unabashedly declared: "I'm here. Who needs to be spun?"

It's actually one of the less florid stories that gets retold about Stone, who has been described, variously, as the "professional lord of mischief ... one of [modern politics'] fiercest warriors, with the battle scars to prove it" (The Weekly Standard); "a dashing, colorful artist of the underhanded" (David Brooks, New York Times); and "the most dangerous person in America today" (The Village Voice).

Now sixty-two, Stone is still given to broad pinstripes, expensive cuff links and flamboyant pocket squares. A blogger, in his off time, about men's fashion, he will tell you that having lots of money, while a state of affairs hardly to be avoided, is not a necessary precondition to maintaining an impeccable sense of style.

On the day he visited "The Foxhole" earlier this month, however, Stone was excited to promote his latest book, "Nixon's Secrets: The Rise, Fall, and Untold Truth about the President, Watergate, and the Pardon" (Skyhorse Publishing, 2014), co-authored with Mike Colapietro.

As a young man in the halcyon days of 1972, Stone worked for the Committee to Re-Elect the President – a period he remembered in a recent op-ed for FoxNews.com – and later came to know the ex-president DURING his retirement. Stone, in fact, recalled having had dinner with RN in April 1994, four nights before the latter passed away.

While the author is unabashedly pro-Nixon – believing that the accomplishments of the thirty-seventh president have been "buried" beneath unending attention to the crimes of Watergate and a prevailing caricature of Nixon as a brooding paranoiac – "Nixon's Secrets" is not unqualifiedly positive. It dwells, for example, on longstanding allegations that Nixon carried on an extramarital affair with a Hong Kong cocktail hostess.

"The essence of Nixon is not ideological," Stone said in his visit to "The Foxhole." "I don't think he had an ideology. He was practical. He was a pragmatist. He was interested in what worked. But the most compelling thing about him is his resilience, his tenacity, his perseverance, the fact that he kept taking these defeats and he kept getting back up. That's the real lessons, I guess, of Richard Nixon."

That Stone got to know Nixon at a certain level of intimacy in those post-presidential years is clear from the way he talks about RN. "You could finally get him to let his hair down after a couple of cocktails. He was not a retrospective, or introspective, guy. But booze was his social lubricant and after he'd had a few cocktails, he would tell you about Alger Hiss, or Dwight Eisenhower, or Helen Douglas, or Watergate."

We also discussed Stone's previous book, also co-authored with Colapietro, entitled, "The Man Who Killed Kennedy: The Case Against LBJ" (Skyhorse, 2013). Stone says his next book, still a work in progress, will be focused on Bill and Hillary Clinton.

The advice Stone proffers for dressing in stylish fashion might also apply to voters just beginning to size up the 2016 presidential field: "Buy basics. Good things are not cheap; cheap things are not good."