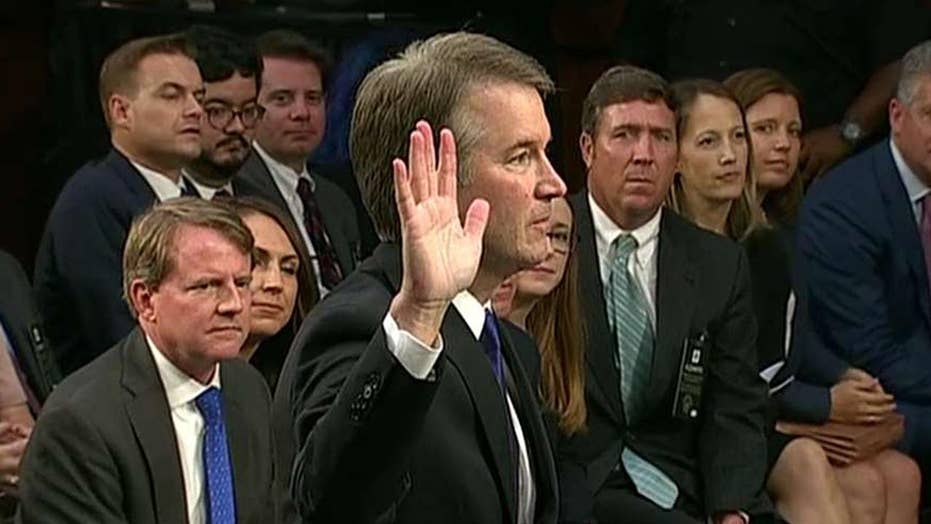 Rich Edson has the details.

Long before Professor Christine Blasey Ford came forward with her accusations of an assault, a raft of questions had already emerged about Judge Brett Kavanaugh and the truth. This debate is central to whether Kavanaugh should serve on the Supreme Court because his job is to determine the truth and then apply the law. If Kavanaugh is unwilling to tell the truth about himself then he is unqualified to serve on the Supreme Court. It is that simple … and important.

First, the lack of documents about Kavanaugh’s public service and the effort to conceal them was the first sign that he was unwilling to have the truth known about his actions during the Bush administration. That service is a substantial portion of his career and worthy of examination regarding  his approach to determining and telling the truth in a post at the highest levels of government  - service in the White House to a president.

If Kavanaugh is unwilling to answer questions about his conduct raised by Ford under oath then his nomination should be rejected.

Furthermore, a review of Kavanaugh’s testimony, under oath, raises a long list of questions about his unwillingness to be truthful. From his semantical game of cat and mouse with Senator Kamala Harris, D-Calif., about a conversation regarding the Mueller investigation with a member of the Kasowitz Benson Torres law firm – feigning confusion about the firm, where it is reported one of his closest friends works, then taking more than 24 hours to deny it – plus his unwillingness to address his positions on Roe v. Wade, presidential pardons, gay marriage, and whether a sitting president should be subject to a subpoena, hardly looks truthful. In fact, he claimed Roe v. Wade was settled law in private meetings but wouldn’t address it in public under oath. That alone raised red flags about Kavanaugh’s credibility.

In retrospect, perhaps we should have realized that there were concerns about Kavanaugh by how he was publicly introduced to America. What originally seemed intended to define him now looks like an effort to inoculate him. We were told that Kavanaugh coached his daughter’s CYO basketball team, the team even attended his confirmation hearing. His classmates and professional colleagues attested to his mentoring. The first ad for Kavanaugh featured a woman who spoke to that attribute and the second ad featured a woman whose daughter Kavanaugh coached. A public relations effort to define Kavanaugh as a champion of young girls and women now appears to be an early effort to inoculate him against charges that he was anything but that person.

Now that Professor Ford has come forward she deserves to have her story heard, Kavanaugh’s actions deserve to be examined, and the American people deserve to know the truth. If Kavanaugh is unwilling to answer questions about his conduct raised by Ford under oath then his nomination should be rejected. There are already too many questions about Kavanaugh’s honesty that are disqualifying. The information revealed by Professor Ford is one more reason, and a very important one, that Kavanaugh is unqualified to sit in judgement of others as a Supreme Court justice when he is unwilling and unable to tell the truth.