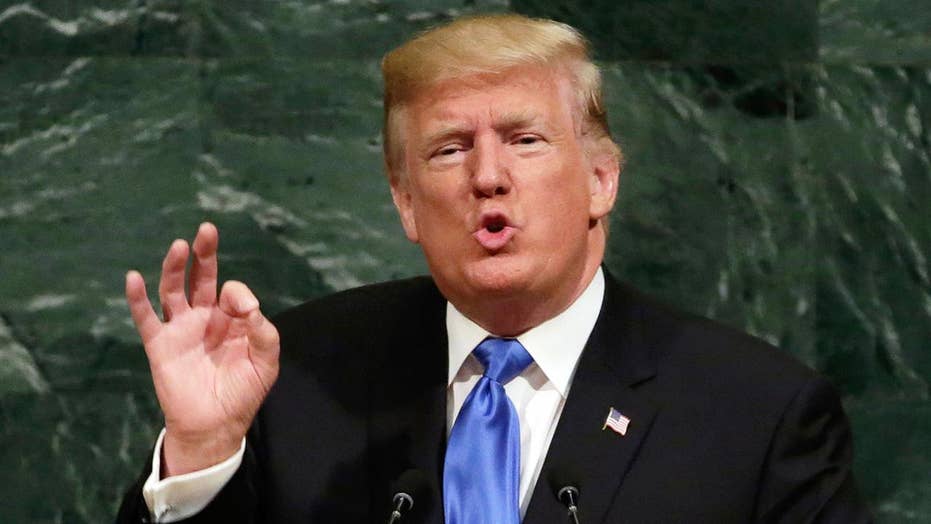 The president demanded the rogue regime give up its nuclear program and ripped Tehran for seeking to destabilize an entire region; John Roberts has the roundup for 'Special Report'

There’s a pitched rhetorical battle underway right now in Washington as an October 15 deadline approaches for President Trump to certify to Congress that the 2015 nuclear deal with Iran (the JCPOA) is in the national interests of the United States and that Iran is in compliance.  Although the president said last week he has made his decision, backers and opponents of the agreement are working overtime to convince him to adopt their recommendations.

President Trump has been highly critical of the JCPOA, calling it “the worst deal ever” during the presidential campaign and “an embarrassment to the United States” during his speech to the UN General Assembly on Sept. 19.

However, the president reluctantly certified the nuclear deal to Congress twice this year due to heavy pressure from his top national security advisers, especially Secretary of State Rex Tillerson and National Security Adviser H.R. McMaster.  After a heated discussion with his advisers, Mr Trump made the last certification in July but indicated he did not plan to do so again.

A few months ago, Tillerson, McMaster and other advisers were telling President Trump he had no choice but to certify the JCPOA because Iran was in compliance and any violations were “not material.”  Many disagreed, including Senators Tom Cotton, R-Ark., Ted Cruz, R-Texas, David Perdue, R-Ga., and Marco Rubio, R-Fla., who spelled out major instances of Iranian noncompliance and cheating in a July 11, 2017 letter to Secretary of State Rex Tillerson.

As the 45 experts said in their letter to President Trump, “It is time to move beyond President Obama’s appeasement of Iran and to begin work on a comprehensive new approach that fully addresses the menace that the Iranian regime increasingly poses to American and international security.”

But the main argument Trump advisers made to certify the Iran deal was that if America withdrew it would alienate European leaders.

Now, with the president reportedly determined to “decertify,” Tillerson, McMaster and others who oppose a U.S. withdrawal have shifted gears.  They have intensified their criticism of the Iran deal as deeply flawed and are proposing the president not certify but remain a party to the deal to fix it later.  In addition, they are calling for the JCPOA be sent to Congress for it to impose more sanctions.

This supposed middle-ground option would allow President Trump to give a tough-sounding speech lashing out at the JCPOA and demanding major changes.  But Iran has made it clear that it will never agree to alter the agreement and Congressional Democrats are certain to filibuster any sanctions legislation that would kill the deal.  As a result, the “decertify but remain in the deal” option is actually a clever ploy to ensure the U.S. never withdraws from the nuclear deal.

Ambassador John Bolton has a far better and more honest option: a clean withdrawal implementing a comprehensive strategy with America’s allies – including Israel – that addresses the full range of threats posed by Iran.

Bolton was tasked to write a plan to do this by former Trump Chief Strategist Steve Bannon in response to the president’s request last July for a policy option to withdraw from the Iran deal.  Worried that the Bolton plan could sway Mr. Trump, senior Trump officials have blocked Bolton from meeting with the president.  Bolton therefore published his “Iran Deal Exit Strategy” in National Review on August 28.

Bolton’s plan has not received a lot of media coverage because senior Trump officials – especially McMaster – have been aggressively working with the press to promote the “decertify but remain in the deal” option.  However, the Bolton plan received a huge boost last week when 45 national security experts sent a letter to President Trump urging him to withdraw from the JCPOA using Bolton’s strategy.

The proposal being advanced by McMaster, Tillerson and others -- that President Trump keep the United States in the JCPOA but not certify to Congress that it is in our national security interests -- is absurd, especially after the president called the agreement an embarrassment to the United States.  This option will ensure that this dangerous agreement continues as is and will undermine Mr. Trump’s credibility with the American people and the world.

As the 45 experts said in their letter to President Trump, “It is time to move beyond President Obama’s appeasement of Iran and to begin work on a comprehensive new approach that fully addresses the menace that the Iranian regime increasingly poses to American and international security.”  President Trump should do this by implementing a clean withdrawal from the fraudulent Iran nuclear deal using the plan drafted by Ambassador Bolton.