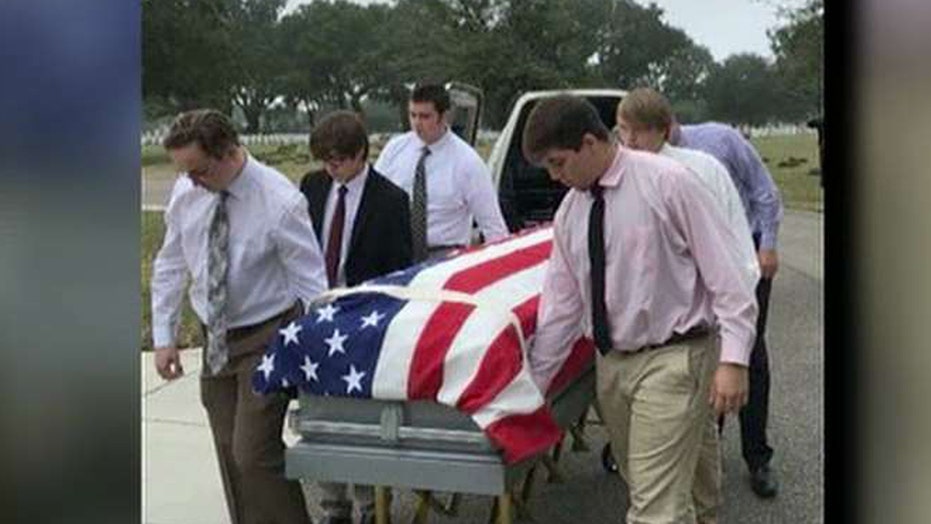 Teens serve as pallbearers for veteran with no family

We don’t know that much about Jerry. He was born in Baton Rouge and joined the Navy in New Orleans. He was a petty officer third class in Vietnam. That’s the extent of his biography.

Click here for a free subscription to Todd’s newsletter – a must-read for Conservatives!

No family. No friends. He died alone.

“No one stepped forward,” funeral home worker Cathy Warden told me. “He just didn’t have any family.”

Miss Cathy explained the situation to her colleague Eva Boomer and together they decided something must be done to give this veteran a proper send off.

“Something had to be done with respect,” Miss Cathy said. “We had to give him what he deserved. Nobody should go alone.”

Miss Eva, who is also a veteran, wondered if some of the boys at Long Beach High School might be willing to serve as pallbearers. It was a longshot, though, seeing how most of the students were out on Christmas break.

But Miss Cathy called her teenage son Bryce who in turn texted some of his friends – and within a matter of minutes, six young men had volunteered to serve at a stranger’s funeral.

Nobody should go alone.

“It was the right thing to do,” 17-year-old Bailey Griffin told me. “He served our country. He fought for our rights. For him to be buried with nobody there was just sad. I told myself I was going to do it and I did it.”

They buried Petty Officer Third Class Jerry Pino on a Tuesday. The sun was shining and there was a cool, gulf coast breeze meandering through the Biloxi National Cemetery. An honor guard stood at attention.

The boys were smartly dressed in khaki pants and buttoned down shirts and neck ties. They solemnly took their places on either side of the flag-draped coffin and escorted a man they did not know to his final resting place.

“I went out there for the service and cried the whole way through,” Miss Cathy said. “He had no one there. This veteran had nobody standing there but these boys.”

But what happened at the end of the funeral was incredibly moving and poignant.

The flag that had draped Jerry’s coffin was folded and presented to the six young men from Long Beach High School, home of the Bearcats.

The Sun Herald newspaper shared a message from the mother of one of the young pallbearers.

“Proud mom when he told me that no one should be buried without people who care present, especially a veteran,” Stacie Tripp wrote on Facebook.

Evidence that moms and dads are doing something right in Long Beach, that’s what Miss Cathy said.

“Our community is teaching these boys from the heart how it should be – how to care,” she said.

They are still trying to figure out what to do with the flag that draped Jerry’s coffin. It’s being encased in glass – along with a plaque that bears his name.

There’s talk about putting the flag on display at the high school or perhaps inside the locker room where four of the pallbearers play football.

It would be a fitting tribute to a man who died alone but who was buried surrounded by his fellow countrymen.

And oh what a lesson for the rest of us – demonstrated by a group of young boys from Mississippi who committed in their hearts that nobody should go alone – especially a veteran.